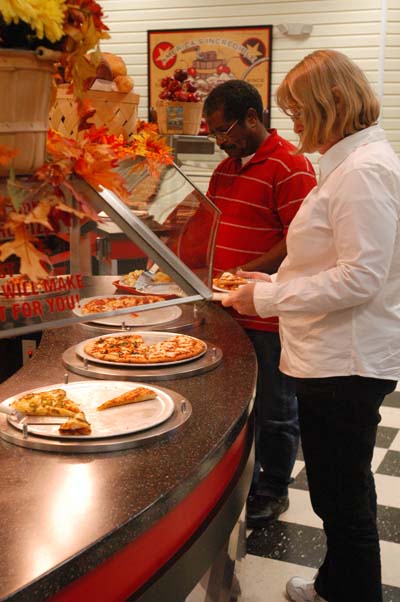 Is a pizza buffet right for your restaurant?

Introducing a buffet to the lunch or dinner hour can be a great way to draw in customers with a minimal equipment investment. But buffets can be wasteful and put food costs and food supply orders out of operators’ control, too.

Is this seemingly easy addition more trouble than it’s worth? Will it be a benefit to your customers, both current and potential? What will a buffet say about your brand?

Since a buffet has the potential to be a great success or a costly mistake, deciding to add a pizza buffet must be a thought-out decision and might require outside input.

“Have a professional firm hold a focus group,” suggests Keith Marshall, president of Absolute Restaurant Consultants, in Franklin, Tennessee. “Hold an organized survey within the business that has the potential to benefit. In order to keep from offending the current clientele, I would offer an incentive –– desserts, beverage or appetizer –– for those guests willing to volunteer for the survey. In order to achieve the best results, your survey should be held on multiple days and survey a large number of guests.”

Stephen Swisher, principal and Founder of Advanced Restaurant Consultants, in Paris, Kentucky, advises operators who are considering adding a buffet to do it as a promotional expense with an implemented metric to track its results.

Mark Lee, founder and owner of Mozzi’s Pizza in Greenfield, Indiana, says adding a buffet to their menu has turned into a positive part of their brand and grown into an everyday option for their customers.

“The best reason (for a lunch buffet) is people have a time restraint, and with a buffet, they don’t have to wait for food at all. Most people have a half hour for lunch, and when they walk in, lunch is ready for them,” Lee says. “With the lunch buffet, you constantly have the option to buy pizza by the slice, too.”

Lee says that since starting the buffet, his food costs have increased by one and a half percent, but volume has increased.

Swisher agrees that a benefit of a pizza buffet is that it draws customers from across a range of demographics.

“Customers see it as a fantastic value, as long as it’s priced well,” Swisher says. “A $15 pizza can feed two people. For $7.50 or less, a person may get a whole lot of options, and the customer sees that as a benefit. Buffets are great for families; a family of six — everyone can eat something different, and it’s self-serve.”

Buffets also can be a true showcase of a restaurant’s best or newest dishes.

“It can be a way to display specialty pizzas. A person who only always eats cheese may not order a specialty pizza, and then they try it at the buffet and love it and order it the next time. It’s a good way to upsell,” Swisher says.

“With equipment, it’s your set-up for your dining room and a holding, warming box for the pizzas,” Lee says. He advises operators to invest in a couple of six-foot hot trays and a hot well for spaghetti and breadsticks and pasta, if necessary.

Along with the pizzas, buffets cook up some negatives, too.

“Buffets are very wasteful. You still have to keep the buffet stocked, even when you only have a couple customers. You may end up with three pizzas thrown out at the end of the day,” Swisher says. “It is hard to keep product good. Pizza sitting for even a few seconds begins to degenerate quickly.”

Lee says there is no control over food costs with a buffet, and in order to offset that, he utilizes their dough in as many ways possible, including offering garlic knots and breadsticks.

“We put out a fairly filling food that doesn’t cost a lot because we make our own dough,” Lee says.

Changing the negatives into positives requires effort from operators and staff.

“You have to do it right. Just throwing a couple of hot trays and two pizzas out there doesn’t make it a true buffet,” Lee says, noting that Mozzi’s Pizza offers a 20-foot hot food line and a 20-foot line with salad and soup and other items. “You have to put high quality food out, a wide variety of pizza. We make any requests people have. We would rather do that and have the person 100-percent satisfied than have them leave wishing they had a different pizza.”

Regarding selection, Lee says they always have pepperoni and cheese pizzas on the buffet as well as a wide variety of specialty pizza and four different crusts.

“A person sitting for a half hour will see like 25 pizzas to choose from,” Lee says.

Depending on your clients, Marshall suggests developing a high-caliber “cook-to-order station” strategy for the majority of buffet items.

Marrying product so the dishes always looks full and stocking the buffet with the freshest product takes continuous effort.

“Product has to be constantly rotated to keep the quality up,” Swisher says.

Although limiting visits to the buffet is not good customer service, operators can still protect themselves from customers taking more than they should.

“You would potentially want to make a policy that no to-go boxes would be allowed for leftovers, therefore protecting yourself from people getting one last plate and then asking for a to-go box,” Marshall says.

Transitioning from buffet time to a traditional dinner time requires flexibility,” Lee says. “We have more of a soft transition — if we still have people coming in the door and it’s working out, we let them do the buffet, but if it’s dead and things are getting aged, we say it’s done.”

DeAnn Owens is a freelance journalist living in Beaver Creek, Ohio. She specializes in features and human interest stories.