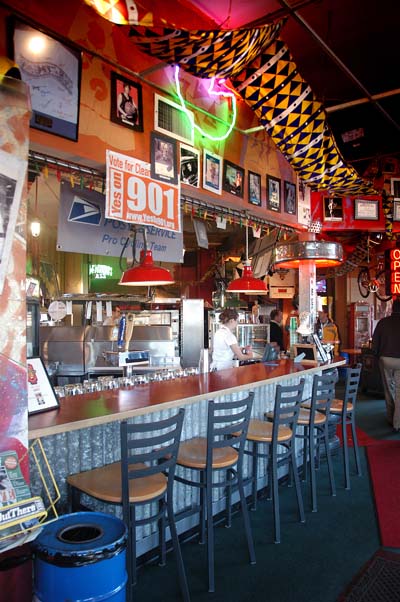 Can you serve both the over-21 crowd and families?

You would think that an Irish tavern in New England, which opened its doors after Prohibition was repealed in the 1930s, would place a high priority on alcohol sales.

You would think wrong.

In fact, the tables have flipped, as it were, at Colony Grill in Stamford, Connecticut, where families peacefully coexist with the over-21 crowd.

Ironically, families are now the restaurant’s largest demographic group, says co-owner and operations director Ken Martin. And the bar and dining area are divvyed up accordingly: About 60 percent of the floor space is devoted to the dining area and 40 percent to the bar. Connecticut law requires delineation between the bar room and dining room, so there is a four-foot solid wall separating the two sections and clear entrances to each.

As for the vying customer groups, not only do they frequent the restaurant with equal comfort, but they also each claim it as their own, with little to no recognition of the other, Martin says. He’s a parent of five children.

“I think the general thought is it’s a communal space. Everyone co-exists,” he says. “You can create an environment that’s positive and healthy with wide demographics. Some is luck and the great community you’re in. But if customers feel like you’re a partner in the community, even though we have a bar, our spot is where they want to congregate.”

By dividing space intelligently, creating a universally appealing environment and hiring intuitive employees, you can balance the needs of families and the bar crowd. Here are tips from Martin and other experts on how to do just that:

• Divide and conquer intelligently. “There is no silver bullet” formula to deciding how much space to devote to each group, says Ryan Meany, manager of business development at BFG Communications, a South Carolina marketing agency with experience helping restaurants with branding. Meany is also a former restaurant owner in Charleston, South Carolina.

First, analyze your location and the demographics of your neighborhood. A “younger” neighborhood (i.e., near a university or a downtown location with urban professional singles) will require a greater floor space for a bar; a suburban area near a school or a park with a lot of Little League games needs greater emphasis on dine-in tables, Meany says.

Aside from geography, your business plan may target a specific group, and that group can be a game-changer, says Pittsburgh architect Edward A. Shriver Jr. of Strada. For example, Pittsburgh Steeler Jerome Bettis’s “Grille 36” offers a “sports entertainment experience.”

The bar “is the center of attraction,” Shriver says. “You’re presented with a giant bar, and the actual seating area is to your left and way to your right. You walk through the bar to get to seating areas. They’ve done the opposite by almost walling off the seating areas. But that’s their business model. It’s primarily a sports bar, no question.”

• Universally appeal to customers with your decor. Fellow Strada architect George Poulin of Philadelphia notes that restaurants are spaces for people to get away and have a good meal. “So the interior design of a restaurant offers the opportunity to transport people to a new world, regardless of whether they are located in a strip mall or vibrant downtown setting,” Poulin says.

To that end, Colony Grill “harkens back to the prohibition era,” Martin says. “We have painted signs on the brick walls like they used to do in the 1920s and ’30s. You’d see that a lot in Manhattan. It’s a timeless look. It’s also very spacious compared to a lot of bars that we compete against.”

The Mellow Mushroom, a franchise pizza chain, has a great décor model that illustrates this, too, Meany says. “They’ve perfected it. They have high tops in the bar area and a traditional dining room. But because of their name, it allows them to go crazy on their interior. They have round, funky, throw-back stuff that makes the space feel alive. There are mushrooms on the walls that give the place depth and take that ‘boring white box’ and give it character,” he says.

• Rely on intuitive staff. Star Tavern in Orange, New Jersey, is very much like Colony Grill, in that it has an equal appeal to families and the over-21 crowd, says owner Gary Vayianos. The restaurant, which has been open since 1945, sits in the middle of diverse neighborhoods and serves clientele of all income brackets, ethnic groups and ages. “The neighborhoods change as quickly as the blocks do in New York City,” Vayianos says.

Star is one big room, with eight booths on the right-hand wall, the bar and two other booths on the other wall. Fourteen tables sit in between the two spaces. The restaurant is busiest when school is out, particularly during July and August. Customers who are now in their 50s and 60s have been coming to Star since they were children. They don’t mind the children, “probably because they sat in the same seats and are more accepting,” Vayianos says.

He thinks the multiple generations get along, though, because of his staff.

“Everyone thinks this place is their own,” Vayianos says. “My employees have been with me a long time. On 7:30 p.m. on a Friday, I’m home relaxing rather than being there, because I have a staff that’s been there so long. I have that much faith in them, that they’re comfortable and can handle everyone’s needs.”

A Formula for Seating

If you’re still unsure how much space to devote to each customer grouping, a good rule of thumb is to devote 25 percent to bar space, with the remainder of the seating dedicated to tables, says Strada architect George Poulin of Philadelphia.

“Depending on the concept, the bar area may include standing area for happy hours and informal gatherings. Establishments with nightlife or live music would likely devote larger areas to the bar,” Poulin says.