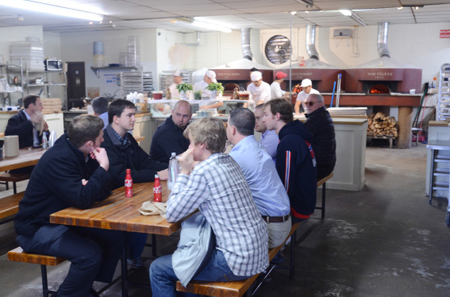 The idea of sitting at a table with complete strangers terrifies some, while energizing others. A table that seats eight to 16 may be considered communal-, gathering- or family-style, and it is a restaurant design concept that is building steam.

Datassential, a research company that monitors restaurant industry trends, identified communal dining as No. 5 on its “10 Food Trends to Follow in 2013” list. Senior Director Maeve Webster says the research team has noticed the trend growing over the past five years. Most recently, the trend has hit notable masses. The communal table is not a new phenomenon. During the French Revolution, a popular dining style was “table d’hote,” where patrons sit at a large table to enjoy a fixed-priced and set menu, with multiple courses. In 18th century England, public houses were known as gathering places for shared meals. Today’s restaurants have modernized the concept, giving diners the ability to order from the menu while still having a shared experience.

Willy Theisen, owner of Pitch Pizza in Omaha, Nebraska, calls them harvest tables. He wanted something cutting-edge, but also something tied to the area’s farming heritage. He incorporated two high-top and two low-top tables each seating 12, making up 40 percent of 115 seats.

Theisen has seen very little apprehension to experience community dining. The seating is so successful at Pitch that as he designed three new restaurants, he started with communal seating and built around them.

Many credit technology and even the millennial generation to driving social seating’s resurgence. Restaurant Consultant Aaron Allen points to the seating’s practicality. From a business view, he says, communal generates higher yields for the space — more people per square foot. There are also other front of house benefits that can impact an establishment’s bottom line. A communal option helps avoid seating a couple at a four-top or six-top. The seating aids in efficiency, providing less maneuvering obstacles for servers between tables.

From a customer perspective, it’s important for operators to know their customer base. Allen suggests that operators understand their clientele psychographically, instead of demographically. He asks: “Are they looking for a social exchange?”

Diners have become more adventurous, Allen says, sparking people to consider sharing a meal with strangers. Millennials, who are set to become the strongest consumer influencers since the Baby Boomers, are gravitating towards social seating. Allen says communal tables also appeal to many single diners and travelers.

Not every concept is suitable for the communal style. Fast casual and quick serve restaurants are better suited to have shared seating with their speedy table turnover than intimate, fine dining locations. Pizzerias that blend a restaurant and bar are a natural fit for social seating.

Bryce Schulte, interior designer at Schmidt Design Studio in Orlando, Florida, likes to mix communal options into his restaurant interiors. “By mixing levels of seating (standard height, bar height and counter height), along with different styles (dining chairs, bar stools and booths), every preference is addressed for patrons,” he says.

Communal tables are not just popping up in urban areas, according to Schulte. “Even in more ‘small town’ areas, restaurants are wanting to promote interaction with people that you may never have the chance to meet otherwise,” he says, adding that community seating can easily be used for large parties as well. “It instantly relieves the stress of having to put three four-tops together,” he says.

Pitch Pizzeria doesn’t have a party room by design. Theisen says the large tables allow groups to be part of the energy and ambiance of the main dining area, verses being isolated in a separate room.

Due to their sheer size, communal tables become focal points of a space. “The success of an interior concept of a restaurant depends not only on the architecture of a space or the finishes selected but the energy that inhabits the space,” Schulte says. “We love implementing communal seating for that reason.”

Nic Van Biene, co-owner of Pinthouse Pizza in the Rosedale neighborhood of Austin, Texas, and his partners were looking for a casual vibe. More than 90 percent of its space consists of large, picnic-style tables. “We choose communal seating because we wanted a biergarten feel since we are a brewpub,” he says. “This style of seating not only allows us to accommodate a large number of guests, but it also is responsible for creating a laid back and social setting.”

Wood bench seating, Van Biene says, does require patrons to sacrifice some comfort, but the seating has been optimal for families with young children. Because of the table’s size, the layout is not being reconfigured by guests frequently.

Van Biene hasn’t received negative comments towards the seating. During the planning stages, he says, the partners removed its staff from the seating altogether by making Pinthouse a “seat yourself” pizzeria. It offers a small amount of smaller individual tables for those who prefer privacy. As operators evaluate the trend, consumers have created rules of etiquette for social diners, such as acknowledging fellow diners, not assuming that those around you want to chat, avoiding sensitive or controversial topics and watching your elbows.

Restaurant Consultant Aaron Allen and Interior Designer Bryce Schulte offer advice about what you should consider to successfully incorporate communal seating. They suggest: