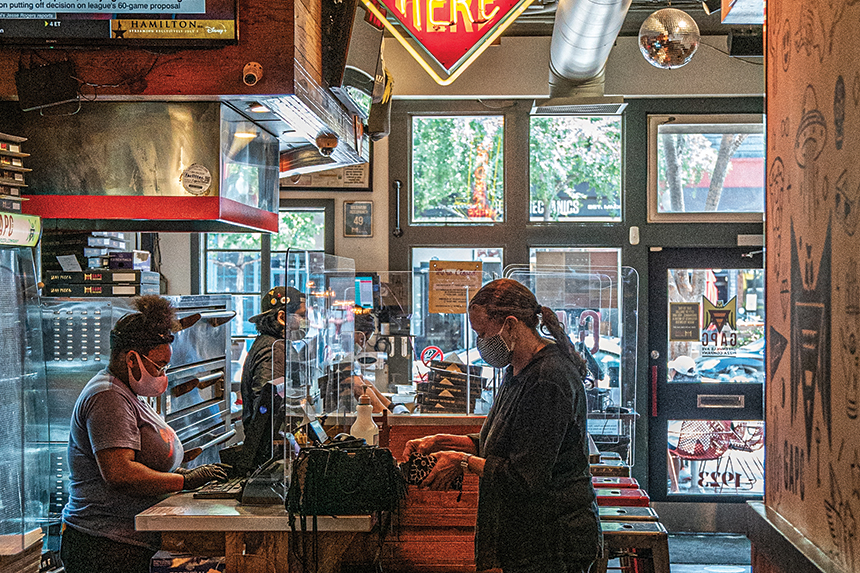 Now, more than ever, is time to give thanks

I’ve been thinking a lot about pizza consumers lately. Strange, I know. My job requires me to think about pizzeria owners 24/7. We have a Man on the Street,  Scott Wiener, whom we task with keeping the pulse of consumers so that he can translate what they want from pizzerias. But ever since this pandemic hit our nation, I’ve seen a big shift with the American consumer.

It started in my own household. Or at least my awareness of it did, I should say.

Not long after restaurants in my home city reopened, my wife asked me to place an order to a locally owned restaurant and instructed me to give the server a large tip. These people are the lifeblood of our community — the restaurant owners, managers, servers, bar staff, etc. So I called a spot we like to frequent. It’s a bar with some killer food, and I knew with no sit-down dining/drinking allowed at that time (this was around early April), it had to be hurting. I knew the bar staff and servers were mostly furloughed, and that those still working to take phone orders and run them curbside to my car probably weren’t getting tipped too well. So I ordered food for my family of four. The bill was around $70. I gave the server a $40 cash tip.

Just a few moments later, as I was driving home, my cell phone rang. It was the server. I could hear the tears in her voice as she thanked me. She said things had been very rough for her and that the tip my family “blessed her with” would go a very long way. It was only $40, but the impact on her situation was nonetheless large.

Just moments later my cell rang again. This time it was the owner. She told me she was very sorry that the server forgot to bring the drinks I had ordered to my car. She informed me they’d bring them to my house right away if I’d give them the address.

I live 15 minutes from the restaurant, and it was raining. I knew they forgot my drinks and didn’t care. I didn’t want her running them back out to me in the rain the first time, and I certainly wasn’t going to have her drive 30 minutes round-trip and miss more tips from other callers just to bring me beverages.

As my family talked about the phone calls I had received on the way home, it dawned on me that the pandemic had helped make me, personally, a more empathetic customer. Pre-COVID I would have been upset at the restaurant’s carelessness. I would have wondered, possibly aloud, how it was so difficult to double-check an order before taking it to the customer.

It wasn’t long before I was noticing small acts of kindness everywhere I looked. Friends and
co-workers were telling me stories of supporting this business or that restaurant because they knew things were tough and did not want to see these small businesses go under. The community, at least the one I live in, rallied to support its own. That was immensely refreshing.

Then the stories from pizzeria owners started pouring in. Yes, many were devastated by the effects of COVID-19 and the requisite down time. Yes, many closed up shop permanently. But, having said that, for every message we received along those lines, we received several more saying the opposite. The number of pizzeria owners telling us sales were actually up were eye-opening. How could this be?

But, still. This was a new animal that was drastically changing the game in an instant. How did pizzerias fare so well?

I believe it’s partly because pizza people are “people people.” You understand hospitality. You know how to tell a good story about your product. You cultivate a family atmosphere. You’re collegial. You’re genuine. You give to your community. And, as a result, people want to support your business.

Just like my family started being more conscious of who we supported and how we supported them, it turns out the rest of the country’s consumers reacted in much the same way. Your success today is a direct reflection of your community involvement yesterday. I truly believe that.

So, with that said, let’s go back to the phone call I received on my way home that night when my family decided to step out from the fear and order food for the first time in a very long time. That call touched me. Why? Because the gratitude was sincere. They meant it when they said “thank you,” and I felt it. And it made me want to order from them again and again.

It’s quite possible that you’ve been twisting your brain into a thousand different knots lately in an attempt to figure out how to market or what menu items to offer during a pandemic. I get it. That’s important. But … have you paused to simply look your regular customers in the eye and deliver a sincere “thank you” to them? It might go much further than you think.