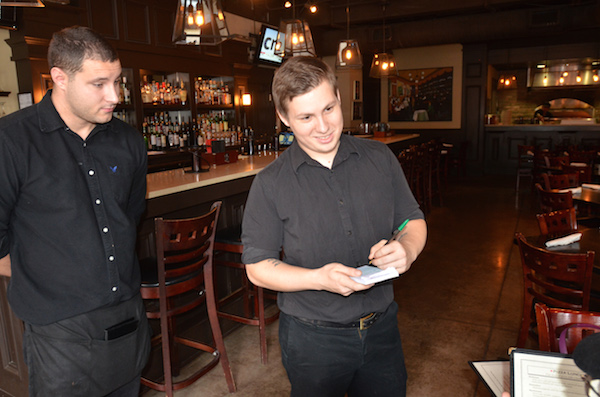 You’ve hired a new server and you’re anxious to get the newbie up to speed at your pizzeria. But, before you let rookie servers hit the floor on their own, shadowing –– where a new server follows and observes an experienced one, after which the roles are reversed –– is an ideal way to train new hires, easing wait staff into their position with real life experience.

Not only is server shadowing a beneficial training technique, but it also places your business in a good light in front of your customers, says Aaron Noveshen, founder and president of the San Francisco-based restaurant consulting firm The Culinary Edge.

“There aren’t that many examples (like shadow training) where businesses can exhibit to their consumers the level of investment in quality that they put into training,” explains Noveshen.

To start a server-shadowing program, Noveshen suggests looking for servers with the desire to become trainers.

“Just because you’re a good server doesn’t mean you’re a good trainer, so (look for) a person who has good training capabilities,” explains Noveshen. “They empathize, they’re good listeners and communicators, they know the standards of the business really well and they exemplify your company culture.”

At Pi Pizzeria, which operates five units in St. Louis, and one unit each in Washington and Cincinnati, servers interested in training approach the management (but managers also seek out trainers by examining guest feedback and data from the POS system, like a server’s guest and check average to find the servers most proficient at their job).

Barry Childers, owner of Barry’s Pizza and Italian Diner in Houston, says that a hands-on approach allows pizzeria leadership to observe the conduct and skills of potential trainers. Manager evaluations are also used to identify over-performers and talented future trainers.

And both Jeff Constance, COO of Pi Pizzeria, and Childers observe leaders organically emerging at their pizzerias when employees gravitate to a specific member on the serving team for help and information.

“That is a natural phenomenon in a team — somebody is going to rise to the top as a leader,” says Childers.

From its inception in 1983, Barry’s Pizza and Italian Diner used shadowing to train servers. The training program has evolved from unstructured –– where Childers simply chose his best server and had a trainee learn from them –– to a structured seven-day program. At the end of each shift, a test on the knowledge imparted by the trainer throughout the shift is administered, with the knowledge of each day building on the last.

“For the first several shifts, the trainee follows (the trainer),” says Childers. “And then we flip them once they know their menu items, which is a test during the process, and the trainer follows the trainee and critiques, coaches and teaches.”

While the trainers use the seven-day training program as a basis for their teaching, Childers uses an interactive and intimate approach to ensure that the trainers have the information and skill set they need to be constructive in their training.

He also asks his servers to read materials like Leadership 101 by Robert Maxwell and teaches trainers effective communication techniques.

“When a trainer opens their mouth, there’s an intent behind it,” says Childers. “They should have a good idea of what the end result of a conversation is going to be or what they want it to be before they start that conversation.”

Noveshen takes a different approach –– he recommends developing a “train-the-trainer” course, which he describes as “… like training to be a teacher.” He explains that this type of course should have a seminar-style format, which includes role playing various situations involving how to teach people with the trainers, and equipping them with knowledge on elements like different types of learning styles and how to motivate people.

Using a testing process is the optimal way to determine if a trainee is ready to serve unsupervised. Noveshen suggests that the test contain both a written –– most suitable for testing menu knowledge, like “What are the ingredients in this dish?” or “What are the allergens associated (with this dish)?” –– as well as oral and demonstrative components, where an employee might be tested on their knowledge of serving according to the company’s brand or their wine-opening skills.

Before they hit the floor solo at Pi Pizzeria, trainees complete a quiz on product knowledge and general information (like directions to the store, the details of why the concept is called Pi, their location’s Web site and Twitter handle and at which location President Barack Obama dined) after typically training/shadowing for five to seven days. Managers and trainers, along with the trainee themselves, also discuss whether they feel the trainee is ready.

At Barry’s Pizza and Italian Diner, a written test is administered, including a menu knowledge and skills test. If this uncovers weak points, training may be extended by one or two days to address the skills needing improvement.

And, when they’re ready to work alone, these servers are given a smaller section and supervised.

“We watch them grow up,” says Childers.

Carimé Lane is a freelance writer based in Vancouver, B.C. She specializes in restaurants and health articles.