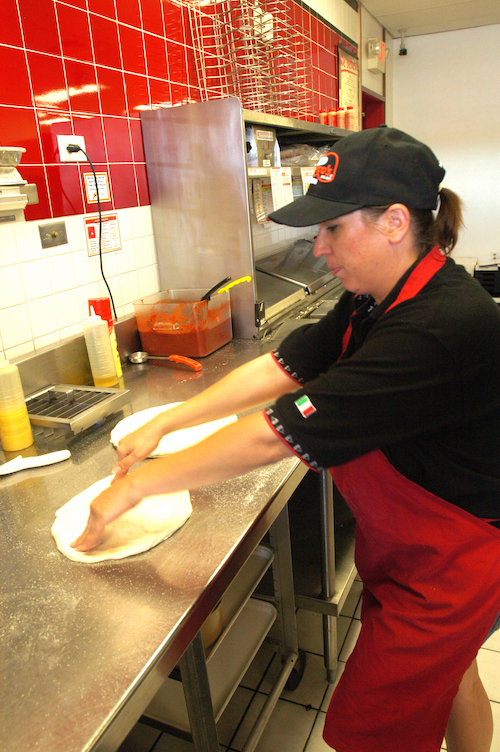 Identify potential franchisees from your own talent pool

Your employee has been with you for years, assuming ever-greater responsibility in your restaurant. He’s gained your trust as someone you can rely on. He’s also ambitious, hardworking and wants more, which is why he’s approached you about owning his own store under your restaurant’s name.

What do you say?

Expanding your business by looking for loyal talent from within can be a good strategy for small independents. Turning an employee into a partner or full owner can foster an even greater sense of commitment from that person, says Aaron Allen, founder/CEO of Aaron Allen & Associates, a global restaurant consulting firm. On the other hand, there are potential downsides, he cautions.

“It can actually lead to an overbearing sense of entitlement and authority (where) an ‘I’m the owner too’ sensibility sets in,” Allen explains.

So far, this hasn’t been an issue for Michael Cocco Sr., president of Cocco’s Pizza. Opened in 1978 and headquartered in Primos, Pennsylvania, the operation has gone from one location to 10, eight owned by former employees. For Cocco, saying “yes” to the idea for the first time in 1985 paid off.

It’s a strategy that “sort of evolved,” as longtime employees expressed desires to open their own locations, says Cocco, saying he saw this as an opportunity to help them out and also grow his presence. He’d scout locations, serving as unpaid consultant until they got up and running. The former employees/now owners use the Cocco’s Pizza name; he owns all but two of the buildings (these are rented) and all signage.

“This is how I maintain control,” he explains. “They use the name with permission. As long as they protect the brand, they can stay in the buildings. In the two rented locations, if someone didn’t want to do it anymore or (was damaging) the brand, I’d take the signage.”
Although owners must stick to the core pizza menu, they can devise their own offerings (minus pasta –– no pasta is served at any location), which vary depending on the concept. For example, one owner obtained a liquor license and turned the location into a sports bar, says Cocco, who regularly visits all locations to ensure the brand is being well represented.

He doesn’t take a percent of sales or charge rent. Rather, he supplies owners with all the pizza food products, presenting them with a monthly “dough bill,” bringing him a little money.

Currently, it’s a “handshake operation,” but Cocco is working on a more formal approach, realizing that as the original owners decide to sell or retire, people could be coming in that he doesn’t know. However, while he’s still involved, he has veto power over any potential buyer.

Mac Ryan, president of Mac’s Pizza Pub in Cincinnati, has also expanded this way. He owns his first store, opened in 2005; the second and third spots are “owned” by former employees, a move initially sparked when his GM at the time wanted to move on. Instead, Ryan offered to let him open his own store, found the location, arranged the financing and helped with the set-up. That was in 2012, and like Cocco, Ryan says the experience has been positive.

To obtain financing, Ryan had to become a 51-percent partner at this location and at the third one, whose owner also worked as a GM for him. As majority partner, Ryan sees all the financials, has the decision-making power and receives a small monthly fee. Although the signage and “the vibe” are the same and the menu is mostly reflected across the board, there are some differences depending on customer demographics/preferences. For example, his first restaurant, near a college, doesn’t offer desserts because they don’t sell. However, desserts are on the menu at his other locations.

A fourth restaurant, owned by a husband/wife team that has worked for him, is in the works. This time, he’s utilizing a franchise agreement rather than becoming a partner; an approach he prefers since the tax situation is less complicated (however, like the other locations, Ryan owns the building). He’ll receive a small franchise fee.

Thinking this might be a good growth strategy for your business? Although having worked with an employee does confer certain protections, it’s not foolproof, says Art Snarzyk, president of InnerView Advisors, Inc., a St. Louis-based talent selection and management company.  For one thing, says Snarzyk, the skills required to do a job well are different from those it takes to own a business; that’s why he recommends using assessment tests to discover if an employee has the right stuff to make the transition.

“These tests can also help identify where the employee might just need a little additional support to be successful,” he adds. “This is critical because if they aren’t, they can damage the perception not only of that location but of the entire brand. Do all you can to make sure, before putting someone in an ownership position, that they and you are set up for success.”

Several things can go wrong when an employee becomes an owner of another location, says attorney J. Philip Kirchner, a Shareholder at Flaster/Greenberg P.C., a Cherry Hill, New Jersey-based commercial law firm. The arrangement could expose the existing business to liability; the new location may operate in a way that damages the brand or the employee may steal your trade secrets. The best protection?

A franchising/licensing agreement specifying the expected standards and the consequences for not meeting them, says Kirchner. This should also include provisions for regular inspections, staff training and should contain wording protecting the franchisor from liability caused by the franchisee.

Protect trade secrets by having the employee sign an agreement containing a restrictive covenant, such as a non-disclosure, or non-solicitation, or non-competition agreement. “Depending on your business’s needs, you might want to include one or more of these provisions in your employment agreement,” Kirchner says.

Pamela Mills-Senn  is a freelancer specializing in writing on topics of interest to all manner of businesses. She is based in Long Beach, California.