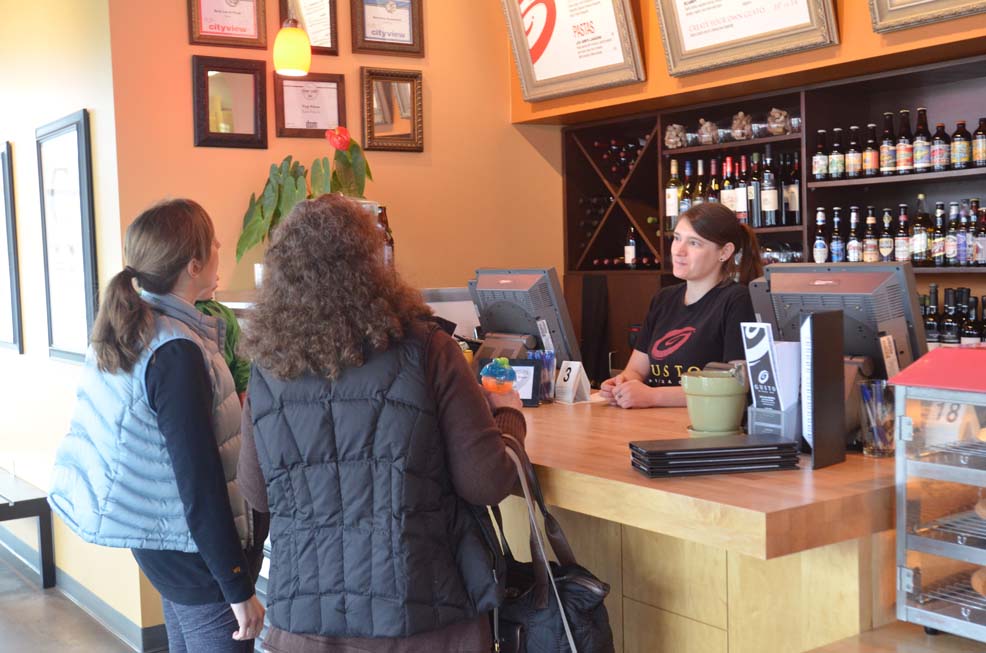 But the cardiac epicenter for DeSano’s pulse and tempo is not the place you’d expect:
It’s the service counter, where the simple act of taking an order for a pizza has evolved from a “take-your-meal-and-get-out-of-here” mentality to an elevated attitude of customer-pleasing acquiescence.

“Too many counter-service restaurants, they see it like a post office service — ‘Next!’” says Marino Monferrato, DeSano’s West Coast managing partner. Prior to DeSano, Monferrato was the general manager at Cecconi’s in West Hollywood, a fine dining destination. Monferrato has first-hand knowledge on the difference between that and the counter-service-centered operation that he now oversees.

It’s possible to offer the same hospitality inherent in full-service restaurants in a quick-service atmosphere and achieve a recipe for a boosted bottom line, experts agree.

“There is a growing trend towards counter service for many reasons,” says Chris Tripoli, president of A’la Carte Consulting Group, a restaurant consulting firm in Houston, Texas.

“One is, you can typically produce a similar menu but with a smaller space. Locations and per-square-foot of lease rates are higher than ever before and will continue to be higher. So despite growing space costs, your business will continue to grow. The second reason is, there’s an operational advantage in the need for less personnel. And the third –– what I think is the most popular or important reason –– is that there’s a direct consumer benefit.

There’s no doubt that consumers feel like there’s better value in that experience where they don’t have to be sat by a hostess and don’t have to tip while eating good quality food. They value their time. There is a value perception –– what we call the fast-casual segment –– where it’s a better value. And this is a perspective-based business. What the customer thinks is what we really are.”

• Beating the competitors. Use counter service to beat out your competitors. In Research Triangle Park, North Carolina, restaurants go head to head for the lunch crowd that has morphed due to burgeoning technology companies. So Randy’s Pizza uses the counter-service model to target the harried work professional who is watching the lunch break clock but also wants a quality meal, says owner Ray Wolfson.

When walking into the door, the first thing the customer sees is a guy twirling pizza dough, sleek stainless steel décor and granite counter tops. A counter person typically works the oven and interfaces with the customers, and someone else works the register and answers the phone. Another person works a sandwich station.

Customers are patient because they can see the staff hustling, Wolfson says. “And they’re not waiting for a server to come to their table. When they’re done, you hear them saying to each other, ‘I’m almost finished. You can take the table.’ It’s seamless.”

• The secret to profit. But can you achieve the warm, hospitable up-selling that you automatically lose when you don’t have a server checking regularly on a table?

Tripoli says yes. “With counter service, there is no one to do suggestive selling or take an order and hang around and tell the story of the restaurant,” he says. “But restaurants are finding ways to do a hybrid, where they have fast casual at the counter, but instead of giving the customer a number, they’re using runners to bring the food to them. And those runners come back to check on you, do some pre-bussing, dessert suggestive selling and drink filling.”

That’s the case at DeSano, where the business model is to bring customers the food. “You go with the number on the table, our cashier writes down the number, and when the pizza is ready, we call out the number and deliver it. It creates the energy in the dining room. There’s music and people talking, and it keeps the energy up. Otherwise it becomes like a mortuary, and I don’t like that,” Monferrato says. “The usage of the food runner is a great investment.”

• Think of yourself as the customer. To provide VIP treatment at the counter, put yourself in the customer’s shoes, Monferrato says. He trains his staff to do the same, incorporating many of the high-touch interactions he instilled at his West Hollywood full-service restaurant.

“I love to chit chat, so when the guests are dining in our open space, I tell my staff to come out of the pizza line, go to the tables and check to see if the guest is happy,” he says. “I tell the staff to have the human connection. I still go around with glasses of water and give it to them without them asking. The guest will think, ‘Somebody is still looking after me,’ and that service is not expected. … If they have $20 to spend and chose your pizza, go the extra mile for them.”

• Hire wisely. It’s difficult to ingrain hospitality qualities in employees at the counter, Monferrato says. So he hires based on personality.

“My belief is, I can teach you everything you need to know — how to use a POS system and ingredients — but I can’t teach you to be nice. I can’t do that. The cashier has to have eye contact, a genuine smile, and I want to see how witty they can be as well. The guest may have had a bad day and is looking for something positive. I want my employees to have a little impact on the life of the person who comes in. That’s what makes a difference at the end.”

Tripoli cautions that you have to start thinking of your counter staff as your new marketing department. “They have to be scripted with a greeting, followed by the question, ‘Can I tell you about things?’ or, ‘you want to save room for our lemon cheesecake, and we have just a little left.’ It’s incredibly important. It starts with hiring but becomes more of a training and a constant retraining,” he says. “It is management’s responsibility to take the ‘cashier position’ of old and throw it away.”