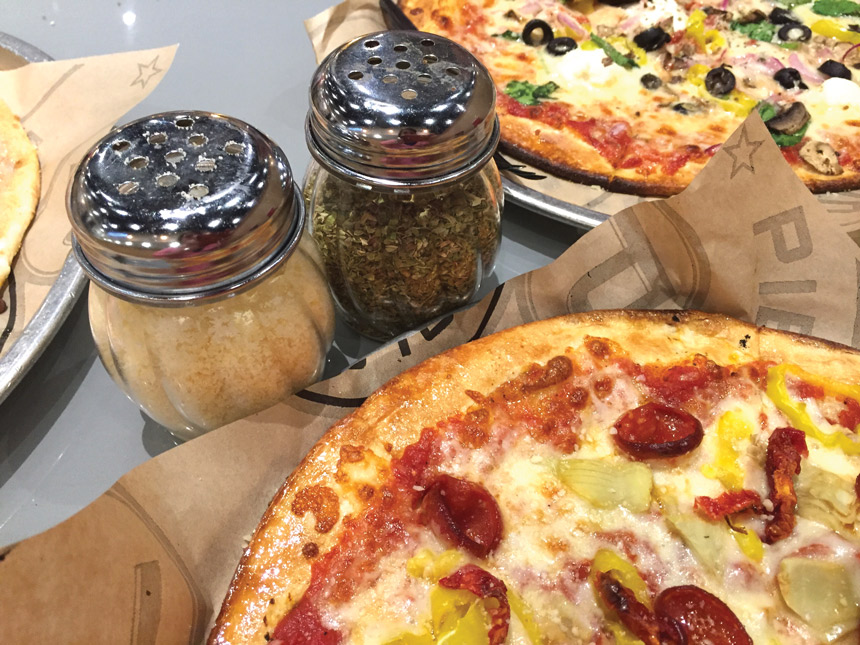 Getting to the Top

Getting to the Top

More than 40 types of toppings are offered at The Olive Theory, but that’s not where adding flavor to its pizzas ends for this pizzeria and many others.

Diners who want to adjust the taste of their pizza will also find containers with Parmesan cheese, red pepper flakes and sea salt on the tabletops of this restaurant in Lombard, Illinois.

“The sea salt is a twist,” says co-owner John Kwok. “We’re going for something more healthy and flavorful. It goes back to what we put in our dough, which is only four ingredients — and sea salt is one of them.”

While most diners may not give as much thought as Kwok has to the condiments that are provided on their table, pizzeria owners and restaurant safety experts agree that thinking about how to maintain the flavors of these items will improve a diner’s experience and help protect them from illness.

“I always say to everyone that they have to be their own health inspector,” says Howard Cannon whose business, Restaurant Expert Witness, consults and provides expert witness testimony for restaurants, bars and other hospitality businesses.

Condiments, like any other food, can be a source of illness if they are not maintained properly. Food safety is an important public health issue for restaurants and anyone who eats in them, according to the Centers for Disease Control and Prevention, which notes that foodborne illness is a common, costly and yet preventable public health problem.

The CDC estimates that each year roughly one in six Americans (or 48 million people) get sick, 128,000 are hospitalized and 3,000 die of foodborne diseases.

While ensuring condiments are safe is a never-ending practice, many that pizzerias commonly provide on their tabletops will last a long time if properly maintained.

“Parmesan has a shelf life of about a year,” Cannon says. “If the owners keep it in the freezer at night it will last longer than that.”

The most important rule of maintaining Parmesan cheese and other condiments is to be sure not to add moisture to them.

“Stay away from moisture. Keep it as dry as possible,” Cannon advises.

Cannon recommends wiping containers several times a day with a dry cloth. When the containers are washed and refilled, be sure they are dry before adding cheese. Wiping containers with a wet cloth is a big no-no.

“All that does is add moisture to the top of the shaker,” Cannon says. “You can get mold in there. Once you have mold in a food item, it’s porous. It can collect anything.”

In keeping with Cannon’s recommendations, Kwok says his restaurant removes Parmesan cheese from their tables daily.

“We wrap it and bring it to the fridge,” Kwok says. “You have to do that so moisture doesn’t get into it.”

To ensure the Parmesan cheese has not lost its flavor, Kwok directs his employees not to fill the cheese shakers to the top, which means they have be refilled every few days with new cheese.

Cannon says there are signs to watch for that show that Parmesan cheese has lost its flavor. “When Parmesan gets old it gets lighter in color,” he says. “It almost becomes beige. When it gets really old, it turns white.”

Shaking the container can provide an indicator of whether mold has invaded.

“If the clumps of cheese break up, you’re fine,” Cannon says. “If they don’t, throw it out. There could be mold.”

While Parmesan cheese can have a long shelf life, spices, including salt, pepper, oregano and red pepper flakes, can last even longer.

“Dried spices will last forever,” Cannon says. “But they can lose their potency, their flavor.”

Despite their expected longevity, Cannon says spices should be changed weekly, and the containers should be wiped clean with a dry cloth regularly.

“That is as much to have employees looking at them and seeing that they are clean,” he says.

For red pepper flakes, “we actually have servers smell and taste them. That’s to make sure they haven’t lost their potency and the customer will have a good experience,” Cannon says.

Making sure that staff members are regularly checking the quality and cleanliness of spice, cheeses and their containers can avoid other nasty problems such as flies using them as a place to lay eggs.

“Believe it or not that won’t make you sick, but it looks gross,” Cannon says.

While many diners enjoy dipping bread into olive oil or using oil and vinegar to dress a salad, Cannon does not recommend keeping those items on the table, and not just for the cost. Problems with vegetable oils can develop if they are kept throughout the day in an environment that changes.

“You’re cooking it (in the sunlight) and then it goes dark,” Cannon says. “You’re changing the temperature of this item. That shortens its shelf life. I’d rather have them (staff) bring them out to the table. It looks better and you can keep it refrigerated.”

Just like olive oil, Cannon recommends keeping ranch dressing refrigerated and bringing it only upon a customer’s request.

That’s a practice that Kwok follows. He also provides truffle oil, extra virgin olive oil and roasted garlic oil that diners can choose to have drizzled on their pizza by staff.

Cannon and Kwok agree that paying attention to condiments is important.

“Just one case of a foodborne illness could ruin your business,” Cannon says. “And it could ruin someone else’s life.”

Marriage is a good thing, right? Not when it comes to some condiments.

Mixing bottles of older condiments (such as ketchup or mustard) with newer ones is not a practice that Howard Cannon of Restaurant Expert Witness endorses.

“Ketchup, mustard and mayonnaise can go bad in a heartbeat,” Cannon says. “Ketchup, by itself, carries a lot of food-borne illness. You really have to keep on top of managing anything with a tomato base.”

Combining old and new means that the fresh ketchup becomes just as old as the ketchup at the bottom, Cannon says.

“You’re better off to keep the container clean, but let it go empty,” Cannon says.

Rather than wiping bottle tops with a wet cloth, he recommends removing them and washing them. Save older tops and re-use them while the newer ones are being washed.

Annemarie Mannion is a freelance writer living in the Chicago area. She specializes in business and health stories.