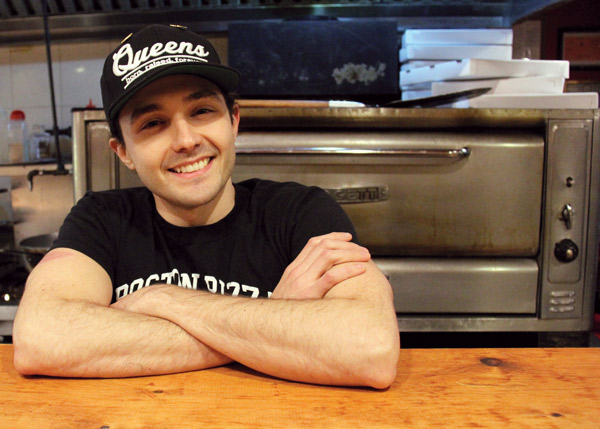 Man on the Street: Breaking Away from the Family Business

Man on the Street: Breaking Away from the Family Business

We all love supporting old businesses. When people tell me about a great pizzeria in their town, they always add: “it’s been there forever!” But as much as longevity is a badge of honor, it can be stifling for younger generations as they start to take over. Lately I’ve noticed several pizza makers dealing with the restrictions of legacy businesses in creative ways.

The Piccolo family has been making pizza in the San Francisco Bay area for over 45 years at Melo’s Pizza and Pasta. They were one of the early purveyors of New York-style pizza in that region, cranking out pies from a gas-fueled deck oven. Manager and second-generation owner, JP Piccolo,  saw the artisan trend on the rise and didn’t want to miss an opportunity to broaden his menu. Knowing that their gas-fueled oven wasn’t terribly versatile, JP added a second oven to achieve higher temperatures required for the new style. He ended up with an electric unit that can reach over 900 degrees, which lets him offer a new list of pizzas while keeping the original menu untouched.

Serhan Ayhan’s parents got into the pizza business after running a quick-serve salad shop for 20 years. They scored a dough recipe from a New England pizzeria and opened Boston Pizza in Astoria, Queens, toward the end of the 1990s.

Serhan didn’t know much about pizza beyond his parents’ until recently. The past few years have transformed him into a sponge, leading to experimentation with multiple techniques during off-hours at the family pizzeria. Not wanting to interfere with the family business, Serhan convinced his parents to let him run a monthly Detroit-style pizza pop-up within the pizzeria. It has become a massive success and now Boston Pizza is garnering a reputation as a pioneer in the neighborhood as the pop-up becomes a destination for foodies from all corners of the city.

Sometimes it’s impossible to play with the menu of an existing restaurant without completely transforming its identity. Frank Tuttolomondo’s grandparents started making pizza on Manhattan’s Upper West Side in 1960 and his family still operates a pizzeria on Amsterdam and 106th St. The shop makes classic New York slices, but Frank knew he could push his pizza-making skills beyond the norm. Just like Serhan, he dove deep into the pool of self-education and ended up making a pizza that didn’t fit into his family’s routine. The problem with a third-generation slice shop on the Upper West Side is that making big changes – or staging a “pop up” –– has the potential to frighten longtime customers, so Frank opened his own pizzeria just one block away from his family’s pizzeria, Mama’s, calling it Mama’s Too. His slices are more rustic and well done than those of the original pizzeria, and he even offers square pies that combine Rome’s Gabrielle Bonci and the thick pan pizzas of Detroit. By splitting off into his own shop, he preserved the family business while carrying on the name.

It can’t be easy going against the grain of a long-standing family business. I have a ton of reverence for anyone who has the guts to play with a format that isn’t broken just because they have the desire to reach a deeper potential.