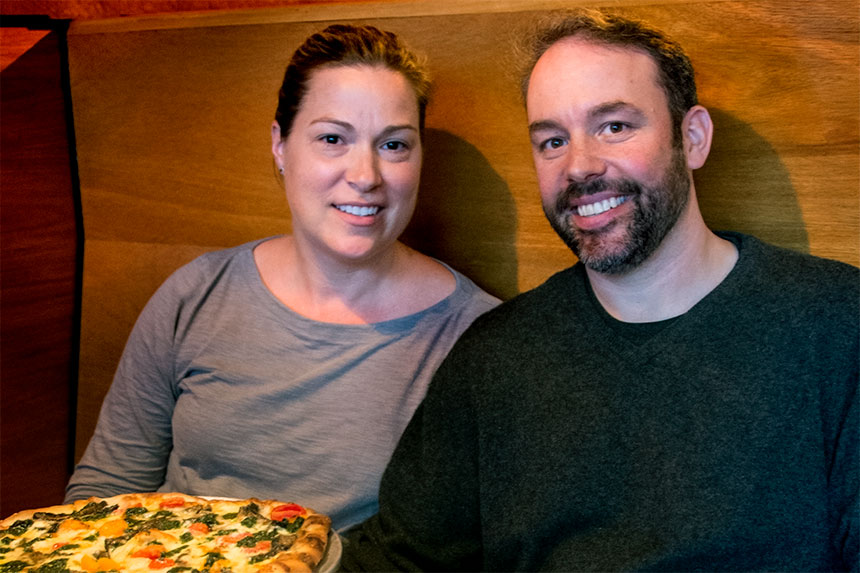 Tucked into a corner of a busy strip mall is a nondescript pizzeria with a very big business. It’s the type of place one might overlook but once visits quickly becomes a regular. There’s a wall of deck ovens at Harry’s Bishops Corner, and on any given Friday or Saturday night, all are fired and filled with pizzas waiting to go to hungry customers.

Owners Kevin and Anne Plaut have more than the usual amount of investment in their business. After all, they met while working for original owner Harry Rufleth –– Anne in the front of the house and Kevin in the kitchen and later as a manager –– before buying the restaurant in 2007. By that time, Kevin was nearly running it full-time and had a fairly easy transition from staff member to owner. Today, sales sit at $1.3 million.

“Kevin had a management position when we took over, so I think in terms of handling the employees he was able to transition fine with that,” Anne says. “Taking on all the decision making and the everyday operations of running a business that’s all yours were probably the biggest changes.”

Anne had been working in another business and split her attention between that company and the restaurant before realizing that ownership –– at least in its infancy –– was a full-time career.

Originally, the restaurant was only open for dinner; the Plauts added lunch and closed an hour between services, but found it easier to stay open all day. Today, the pizzeria is open six days a week for lunch and dinner. (It is closed on Monday “to keep our sanity!” Anne laughs.)

About a year ago, they gave the restaurant a refresh that included new lighting and artwork, but the kitchen is where the magic happens. The wall of deck ovens “are pretty much full at night,” Anne says as Kevin puts fresh arugula on a pizza to be photographed. Pizza accounts for 80 percent of sales, as the menu only includes pizza and salads. Panini are available for catering, “but our focus really is on the pizza,” Kevin says. “When people are thinking about pizza in the area, we want to be the place they go to.”

And while those ovens can put out up to 500 pizzas on a busy night, Kevin says they also roast their own vegetables, caramelize onions and Brussels sprouts and they bottle three award-winning signature salad dressings that are popular with guests. After all, if you’re going to offer something signature, why not make it available to your guests? Those bottles then sit in customers’ refrigerators as a constant reminder of something the restaurant does and does well. Produce is delivered three times a week.

“In the summer, we have a tomato basil pizza that we use native tomatoes on and fresh basil,” Anne says. “It’s become so popular that customers start asking for it in June even though the tomatoes typically aren’t ripe and ready until the end of July.”

They source the tomatoes from a farm right around the corner, get meats from a local processor in Hartford and “we make it known that we use local items,” Anne says.

“It’s a great way to cross promote our businesses,” Kevin adds. “For a little place with less than 2,000 square feet, we really do a lot of pizza. The wait on the phones can be up to an hour-and-a-half to pick up a pizza. Even the wait to sit down can be an hour.”

Delivery is available for catering only, which has picked up significantly in recent years. “We work with a third-party delivery company for smaller deliveries to individuals and residents,” Kevin says.

“We also have one oven that we dedicate to gluten-free pizzas,” Kevin adds. In fact, gluten-free has become such a big business for the Plauts that they opened their own gluten-free business, Still Riding Foods, which offers gluten-free menu items like pasta, nine-inch and 12-inch doughs and breadcrumbs for consumers and other restaurants all over the country. “We have a dedicated gluten-free facility in Bloomfield (Connecticut), and all we do is make pizza crusts and ship it out,” Anne says.

“At this restaurant, we go through about 150 gluten-free pizza crusts a week,” Kevin adds. “There’s just a huge demand for it.”

Beyond gluten-free crusts, the Plauts also menued dairy-free cheese after realizing some customers had other dietary concerns as well.

As the economy has improved so, too, has competition. Realizing that adding a bottle of wine to the bill is often a treat for the majority of diners, the Plauts wanted to make it an affordable option for every diner.

“We have a very progressive wine program here,” Kevin says.

Adds Anne: “We offer very competitive pricing for our wines. We don’t go as high as most restaurants do. Most people don’t want to pay more for their wine than they do for their pizza, so it has worked for us. We sell quite a bit.”

Bottles of wine start at $12 “and the top of the line is around $24,” Kevin says. “That same $24 bottle you’ll probably find in the ($40 range) anywhere else. If you come in, you’ll see two-thirds of the tables with wine. People have been very clear as to how excited they are to come and have a bottle of wine and not feel like their pockets are empty when they left. What it does is it really creates frequency for our customers. Where they used to order (a bottle of wine) once a month, now they can order once a week here. It creates regulars. Most of our customers are weekly.”

Wine tastings with specialized menus are held on occasion –– typically on Mondays when the restaurant is closed –– and “the feedback that I get on those (specialty pizzas created for the event) will tend to land on our seasonal pizza menu,” Kevin says, adding that it is a great way to try out new pizzas without a long-term menu commitment.

They also offer a few beers on tap, focusing on local craft beer if they can get it.

The Plauts were initially challenged by the day-to-day financial aspects of running a business –– such as taxes and local regulations –– but now no longer find it necessary to be on-site daily. “We have a great staff here,” Kevin says. On average, the restaurant employs about 25 people, with the majority of employees part-time. “We’ve had longevity in our staff and everybody that comes in cares about the place and takes care of it when we’re not here.”

“They’re going to create success for you and for the restaurant,” Kevins says.

When it comes to opening a second store, “we go back and forth, but our focus has been on Still Riding Foods and making sure that this restaurant maintains quality and appeal,” Kevin says. “As more and more pizza places open up, they’ve been kind of gearing themselves toward what we’ve been doing for a while with the specialty pizzas and using some unique and funky ingredients. … We always want to make sure we’re ahead of the curve.”

Aside from Facebook, Instagram and a well-designed Web site, Anne says “we a do a lot of outreach with the community (like) fund-raising for local organizations and charities, schools and teams that need to raise money for their athletic departments. Community is important to us.”

After all, success is best measured by the people who work and dine at any restaurant.