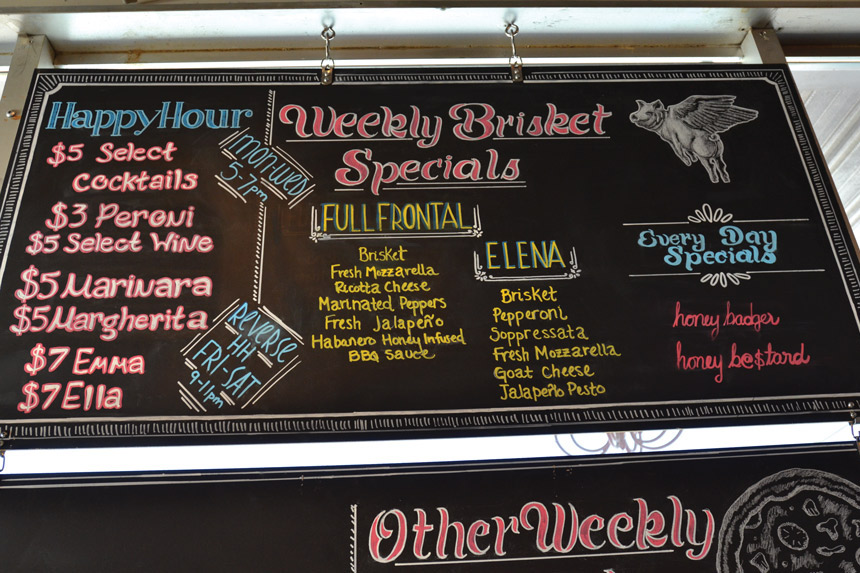 Signage: Across the Board

Signage: Across the Board

Menu boards can do more than list today’s specials

Menu boards let customers know which pizza toppings are available, what today’s specials are and even what kind of establishment the eatery is. Pizza operators say they choose signage that matches the décor and the branding of the restaurant, is easy to use and fits their budget. Most importantly, the menu boards have to be easy to update, because things change in the restaurant world.

“One minute flour goes up, the next minute flour goes down, and you have to change the price of your pie,” says David Kuban, who owns the Norwalk, Connecticut, location of the family-owned Planet Pizza. “You’re calling the sign guy, he charges ten bucks to change it, and you’ve got to get up there with a razor and scrape off the price.”

Kuban has not scraped off prices with a razor in more than four years, since he and his cousins, who own other locations of Planet Pizza, switched to a system that involves flat screen televisions, software and a USB flash drive. He makes changes to prices, adds photos of the food, even sets up messages to display, then saves the information on a memory stick that plugs into the TV. With a few clicks, he can stop listing a salad dressing that ran out, take soup off the menu during an unseasonably hot week in September, and post a “two large pies for $25” special for Halloween. “If you want to be funny and it’s someone’s birthday, you throw that up there, ‘Happy Birthday Frank,’” he says.

The only drawback, Kuban says, is that the televisions last about four years. “We’re leaving them on 14 hours a day,” he says. “They do burn out.”

Digital menu boards can be a good way to upsell menu items, says Larry Fiel, the director of marketing for PDQ Signature Systems Inc. in Warminster, Pennsylvania. “You have a blinking sign that has today’s special,” he says. “You can promote high-margin items that you can’t promote any other way, in real time.”

PDQ’s digital menu boards are integrated with the point of sale system. Say a store owner decides to offer a dollar off pizza on Wednesday. “You go into the POS, change the menu and it updates on the digital menu board, and it’s instantaneous,” Fiel says. “You can schedule daily, weekly, monthly — say every Tuesday from 8 to 10 p.m. pizza is half price. It automatically changes.” That’s a better solution than using a piece of paper to cover up a previous price. Not only does that look unattractive, he says, but it alerts the customer that the price of an item went up.

Fiel’s advice is to keep any message brief, so that the customer can order quickly.  “You’ve got to keep it simple and it has to be readable,” he says. “You don’t want content overload.”

Visuals are important.  “A big part of what’s going on in their heads is: ‘How can I put (up) photos of my pizza’,” says Jim Miller, owner of Minneapolis-based Kiwi Menuboards. Kiwi started out as a magnetic menu board company and now offers other products such as KiwiEZ digital menu boards. The system uses a USB flash drive that the operator plugs into a television. “There’s no Internet, no Wi-Fi, no learning curve. You don’t have to worry about your Internet going down and rebooting it.”

Miller recommends operators update the menu prices at least once a year. “They don’t have to change all their prices,” he says. “They don’t want their customers to see all their prices went up. By having the software, when the cost of pineapples goes up, they can change the price of the Hawaiian pizza.”

He says digital menu boards make sense in an age where people are used to looking at screens. “Our whole society is centered around digital devices,” he says. “It’s almost expected when you walk into a store, you kind of look around for the TV telling you what do they have and how much does it cost.”

Others maintain that there is still a place for the paper version. At NAPIZZA, with five locations in the San Diego area, the menu boards are posters that are produced at a local print shop. “We are a family-owned small business,” says Camille Sage, who handles all the brand coordinating. “We don’t want to go digital. We don’t want to do the corporate look.”

The menu boards were black with white lettering, and NAPIZZA is changing them to black print on white paper. “It’s just more visible,” Sage says. “That’s who we are, what we are about. We care about people.”

If they need to change a price, they use a sticker to cover the old price. Once a year NAPIZZA changes the entire menu. “Everything takes time and money and you have to do all the changes accordingly within your budget,” she says. “We do large changes once a year around January or February, when it’s kind of slow.”