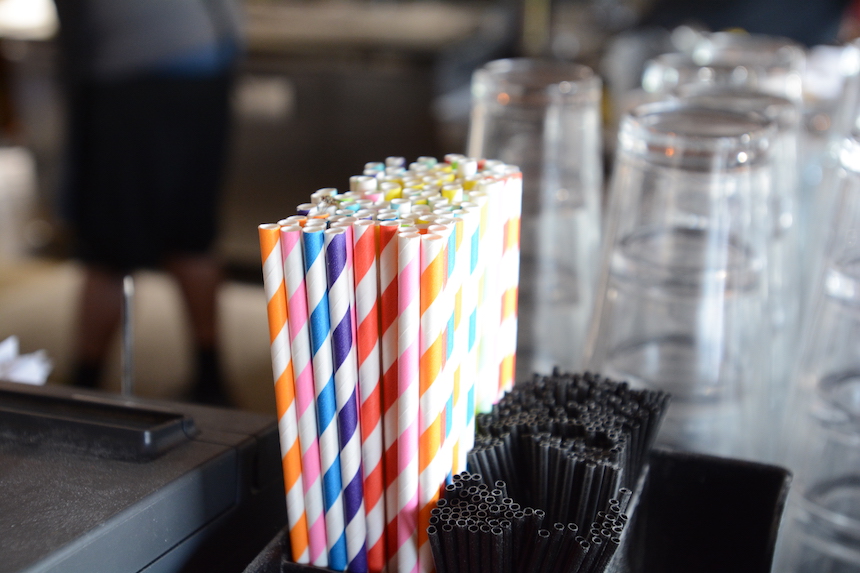 It’s not quite 2:00 p.m. on a sunny summer Tuesday, but Michael Zappa has been slinging pies for hours already, dishing up some 350 slices at Pizza by Certé, a 12-year-old pizzeria in New York City.

That’s a lot of pizza – and a lot of opportunity for waste.

As a Certified Green Restaurant, one of only about 100 in the Big Apple, Pizza by Certé takes its environmental ethos seriously. The restaurant uses craft paper boxes for its to-go slices and recycled metal plates for its in-house guests. Its bags feature a 100-percent biodegradable material and its utensils are made from 100-percent biodegradable cornstarch. Containers for sauces and dressings are comprised of plant pulp, while the eatery uses GreenBox, an eco-friendly pizza box constructed of recycled material, for the 100-plus deliveries it makes each day.

“From the moment Edward Sylvia started this restaurant, he said Pizza by Certé would do its part to help the planet,” says Zappa, the pizzeria’s general manager.

For Pizza by Certé, sourcing eco-friendly disposables has been a conscious choice. For others, however, legislation has forced change.

Last year, Seattle became the first major U.S. city to institute a ban on plastic straws and utensils at bars and restaurants. Other cities and states have followed suit, targeting environmental antagonists like plastic bags and Styrofoam packaging in addition to straws and utensils.

“Our environmental issues are getting larger, not smaller, and that’s driving a lot of action around disposables,” says Michael Oshman, founder and CEO of the Green Restaurant Association, a Boston-based non-profit that helps U.S. restaurants make more environmentally conscious choices and also certifies restaurants as Green operations.

Alongside mounting legislation sits rising consumer interest in environmentalism. According to The Conference Board Global Consumer Confidence Survey, 60 percent of North American consumers are “very concerned” about food packaging waste and food waste.

“These are no longer fringe issues,” Oshman says. “Younger consumers have grown up with these issues being talked about regularly and want to see involvement.”

Whether by choice or edict, pizzerias across the U.S. are increasingly investigating alternatives to conventional straws, cups, utensils,
to-go containers and pizza boxes.

Just a decade ago, hunting for alternative disposables could be a complex, time-consuming affair. Operators often had to find and source goods from a variety of niche suppliers – to-go containers from one vendor, paper supplies from another and cups from a third, for instance. Today, however, that layered process has largely evaporated as broadline distributors have become more engaged and the number of alternative products has swelled and driven improved accessibility.

Zappa, for example, uses one supplier – New Jersey-based Summit Paper – for many of Pizza by Certé’s disposables, though he continues searching for a paper straw that meets his specs.

“We haven’t found anything that works as we’d like so far,” Zappa says of an alternative to the single-use plastic drinking straw.

While vendors might offer a range of alternative products, it’s true operators might need to source specific goods from other suppliers because of costs, aesthetics or even functional properties, such as a product’s ability to retain heat or carry product.

“There’s nuance here and there isn’t one blanket solution for everyone,” Oshman says.

On the costs of alternative disposables

In most cases, operators will pay a premium for more eco-friendly disposables compared to conventional options. Zappa estimates that he pays about 10 to 15 percent more for his products compared to traditional disposables. Though Pizza by Certé’s high volume helps to offset those costs, spreading the added costs over thousands of tickets each week, Zappa also checks supply costs on a weekly basis to ensure a prudent financial outlay.

Oshman, meanwhile, urges restaurants to look at the investment more holistically. He cites restaurants that have ditched plastic drinking straws in favor of a more eco-friendly – albeit costly – alternative, but simultaneously installed a straw-upon-request policy that minimizes distribution and ultimately reduces the overall spend on straws.

On selecting the right alternative disposables

Presented with a range of options to replace conventional disposables, savvy operators consider their costs and their operations before making any decisions.

“It’s important for restaurant operators to be discerning,” Oshman says.

Consider compostable products, relatively prized goods among the environmentalist crowd. If an operator doesn’t compost these products or puts the product in the hands of carryout diners who are highly unlikely to compost the product, then the investment is futile. In such cases, a post-consumer recycled waste product might be a more sensible choice or a restaurant might institute reusables – plates, cups and the like – for dine-in customers.

“Just because you’re told something is a good alternative, doesn’t mean it’s the right option for you,” Oshman says. “Investigate how a product works for your needs and be methodical so you’re helping the environment without damaging your bottom line.”

As bans on disposables like straws and plastics become more commonplace and enter the legislative pipeline at an increasing pace, Oshman urges restaurants to be proactive.

“If you do it on your own timing, then it’s easier and more convenient to pull off,” he says. “You can work things out with your distributor in a more calculated, thoughtful way rather than being put under the gun of an imposed ban.”