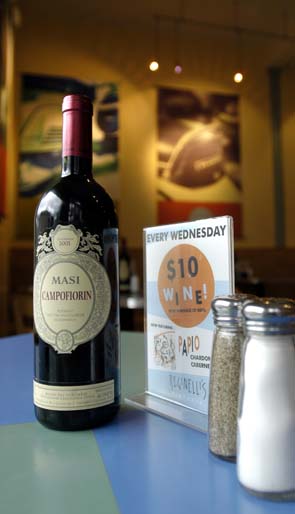 Michael Durkin worries that his regular customers will get tired of ordering the same pizza every time they visit his two-location Durkin’s Pizza in McKinney, Texas. “One of the things I learned in the pizza business is people are creatures of habit,” says Durkin, who opened his first location in 2008 in the Dallas suburb. “A big issue with me is I always fear burnout. We have so many people that eat in our restaurants three or four times a month, so is there a point where they reach saturation?”

He knows the solution is to offer something new, but it is never easy to get the word out to the sausage-and-pepperoni crowd when the eatery introduces, for example, a barbecue chicken pizza. So when Durkin did launch the pie this year, he used in-store marketing such as posters and table tents. Customers order their usual at the counter, sit down and then see the table tent. “They say, ‘Oh, you have a barbecue chicken pizza? I will order it next time,’” he says.

Although he does not have a scientific way to measure how many people returned and ordered the new menu item, he knows enough people ordered the barbecue chicken pizza for him to add it to the permanent menu. The pizza features barbecue sauce, sliced marinated chicken and cheddar and mozzarella cheeses.

The table tents account for about 15 percent of Durkin’s advertising budget. He orders 60 of them at a time for 15 tables. He quickly learned not to buy the expensive, glossy card stock. “They get dirty, and you replace them,” he says. “I like them to look really clean, so if one looks bad we throw it out. We don’t spend a lot of money on them.”

The two stores also use more modern marketing such as social media, but Durkin has seen a better return on investment with table tents and posters than with digital efforts such as texting. Durkin works with a graphic artist to design the in-store materials.

Chris Ransom, owner and manager of Grand Avenue Pizza in Laramie, Wyoming, agrees that table tents are useful for getting people to try new menu items, which in turn can help build repeat business. “Word of mouth gets people in the door,” he says. “The more they know about what you do, the more likely they are to come back in the same week.”

The key, Ransom says, is not to clutter the table. He hired a student from the University of Wyoming to create tabletop items that look like small wooden pizza peels. They hold several printed cards that the customer can flip. So while the person waits for their order, they can read about beers, events, and, notably, unusual menu items.

“In-house marketing is a good way to promote your experiments,” Ransom says. “We do a lot of creative things in the kitchen during down time.”

One recent experiment was the Caribbean, which involved an olive oil garlic base with mozzarella, jerk marinated chicken, pineapple and diced bananas. The pizza did not exactly take off at first. Ransom tried writing the description on the menu board, but people did not start ordering the Caribbean until he included it in the flip table tents and in menu inserts. “Now it’s one of our most popular pizzas,” he says.

Ransom says the pizza peel table talkers cost about $200 for 20 tables. He also uses Facebook and other social media. The table tents are on the tables all the time, but he does not want to post too often on Facebook. “If you post twice a day, people get annoyed,” he says. “It’s like junk e-mail. They stop looking at it. We use Facebook for something out-of-the-ordinary.”

Christina Coy, director of marketing for Dallas-based Pie Five Pizza, says social media has its purpose, but customers respond to printed materials in-store too. The 26-location fast casual subsidiary of Pizza Inn Holdings, Inc. has traditional menu boards –– some customers found a digital version hard to read –– as well as hand-held menus and posters at the beginning of the line. “A lot of people don’t make their decisions on what they are going to eat until they get inside the store,” she says. “You see options put in front of you, and decide what it is you want.”

She adds that the three-year-old Pie Five Pizza used to promote limited time offer pizzas on table tents, but the tactic did not work in the made-to-order concept. By the time people sit down, they have made their decision, Coy says. So the LTOs are on a poster at the beginning of the line, then on a window cling on the make line. “If they see something twice, it’s repetitive, and if they like it they’ll order it,” she says.

Jim Williams, founder and president of MustHaveMenus, a menu printing and marketing company in Ashland, Oregon, says the key is to keep the message simple, and not to try to promote too many menu items with in-store printed materials. “If you’ve got a pizza of the week or a dish of the month, operators understand there is economics to be had in selling a lot of one pizza,” he says.

Servers do not have to recite a do-you-want-breadsticks-with-that upsell. They just have to be personable and fun. “You are increasing your reputation because it’s part of the experience,” Ransom says. “Service is one-third of the experience, and food and atmosphere are the other two.”

Christina Coy, director of marketing for Dallas-based Pie Five Pizza, says staff at the made-to-order concept often educate customers about menu items. “Someone will ask, ‘Is the spicy marinara very spicy?’ and the staff will say, ‘Well what you can do is mix it with regular marinara,’” she says. “People are afraid to ask for stuff, afraid they will be turned down. You have to educate them.”