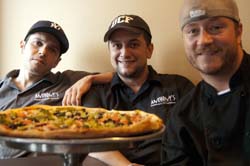 When most folks think about Orlando, it’s the theme parks, conventions and tourism that readily come to mind. but for Bronx-native Johnny Markaj, the bustling downtown district is where he has carved a niche for his pizzeria, Anthony’s Pizzeria & Italian restaurant.

Nestled downtown on a street lined with trees, small businesses and homes, it’s a far cry from the chains and hotels his city is known for. and he wouldn’t have it any other way.

Markaj spent his formative years working for his uncle, Anthony Marku, who owned a traditional New York pizzeria before relocating in 1986. Markaj moved down in 1997 and began working in his uncle’s new pizzeria and in 2001, he bought in as 50-percent owner before taking it over completely a few years ago.

Today, there are several other Anthony’s in the area, and all are independently owned and operated by Marku, other family members and friends. each has its own recipes. Markaj’s store on Summerlin avenue (check) is located in historic Thornton Park, and “it’s a great little neighborhood. It wasn’t that great years ago,” Markaj says. “When we opened up, (it) was right when it started to turn a little bit. People thought we were nuts for opening up here (but) it worked out well for us. We’ve made ourselves part of the community. Ninety percent of my customers are all repeat customers.”

Annually, the restaurant brings in $1.2 million and employs 16 to 22 people. The majority of its business –– 65 percent –– is dine-in. Delivery makes up about 10 percent, with carry- out about 25 percent.

Orlando is home to hundreds of restaurants both chain and independent, and “competition is healthy,” Markaj says. “I love competition. You never heard Michael Jordan say ‘oh, sh–! Here comes the nix. Competition keeps everybody on their toes … Especially in the past four or five years.”

To increase business amidst Orlando’s changing restaurant landscape, “two years ago, when the economy took a dive, I started to deliver. I’d never delivered before,” Markaj says. “I do a lot of marketing in that aspect –– a lot of guerilla marketing (like) coupons for delivery. There are no dine-in coupons for that. It’s all for delivery to boost sales when we slow down a little bit.”

Although delivery is a challenge, he says adding it was necessary to increase business. “I don’t enjoy delivery,” he admits. “It raises all my costs across the board, but you make more money.”

Pizza accounts for 65 percent of sales, which is a big amount to push out in Anthony’s limited space. “I have an extremely small kitchen,” Markaj says. He places distribution orders three to four times a week to ensure freshness and maximize space, but the traditional new york-style pizzeria doesn’t require an extensive menu. “We run a lot of specials depending on what day of the week it is,” Markaj says, “but I don’t generally run them on a Friday, Saturday or Sunday when we’re really busy. We just don’t have the room.”

Aside from daily specials, Markaj says he hasn’t changed the menu in seven or eight years –– he hasn’t needed to –– but the menu will soon receive an overhaul to accommodate some physical changes he plans to make to the restaurant.

“I keep my menu short, simple and the best that we can make it,” he says. “But everything’s made fresh daily.”

Much is made by hand, including dough, sauces, cutting and breading chicken and slicing vegetables for pizzas and salads. “My labor costs are high,” he says. “Kitchen and labor run the highest (up to 30 percent) but it’s necessary unless I want to get back there myself seven days a week, which I don’t. I don’t have the time.” (he also runs a Mexican restaurant nearby and took on a partner, Eri Lulo, with plans to expand both concepts in the future. although they maintain separate menus,operating two restaurants in close proximity gives him more buying power.)

Pepperoni and classic cheese are, of course, the company’s top sellers, but he plans to experiment with gourmet pizzas with his new menu. “I think i’m going to do them in one size. Keep them smaller,” he says. Although there hasn’t been a customer demand for it, “I’m going to teach them about it.”

Although Anthony’s has made a name for itself in the community, Markaj favors guerilla marketing tactics over more traditional advertising outlets.
“I’ve tried everything (from) newspapers to magazines, but I don’t really think that works that well,” he says. “It’s mostly guerilla marketing and social media. it’s a lot of door-to-door, hanging flyers and coupons as far as delivery goes (and) social media and word-of-mouth for the dine-in side. I really push my staff on getting their friends in there … To come in and hang out. We’ll give them a small discount to entice them to come in instead of running coupons.

“We also have a lot of beer specials for the games –– bucket specials and happy hour. That’s mostly word of mouth.”
The restaurant initially sold beer and wine before obtaining a liquor license in 2007. That proved challenging because Anthony’s is in close proximity to a school, but today alcohol accounts for a whopping 18 percent of sales.

Although Markaj and his partner do plan concept growth in the future, immediate focus will be on renovating the current Anthony’s location first and finding the right people to grow his concept. At one time, he had multiple units but found it difficult to manage them single-handedly and his staff was spread too thin. “A big thing for me is maintaining quality,” he says. “Do I want to sell out and become a Papa John’s or a Domino’s, or do I want to stay an independent and make it the best that I can? I’m all about quality and service and I like being a part of my community.

“If I get any bigger on the pizza aspect –– a hand-tossed, new york-style pizza –– to keep it real and original, you have to have the right staff,” he says. “I can’t just put a machine back there to make the pizzas, you know? If your staff is not trained properly, then don’t even start a pizza shop.”

He does daily one-on-one meetings with staff, and “most of my guys have been here forever and the ones that have left have left to open up their own
places in town. … They’re successful on their own, and they learned that from me,” Markaj says. “I taught them how to make a pie. Staff training is no. 1. I can only do so much. … All that other stuff –– marketing, etc. –– none of it matters if your staff is not trained properly.”

When it comes to expansion, Markaj doesn’t expect an overnight explosion of units and has no pressing plans for franchising the Anthony’s concept.
Orlando was hit hard by the economic downturn (once surrounded by mortgage brokers and realty companies, Anthony’s lunch sales was especially hit hard by Orlando’s real estate fall) but Markaj wants to grow smart rather than fast. “Like everything else in life, you’ve got to be committed,” he says. “This is a business that you have to be committed to.”