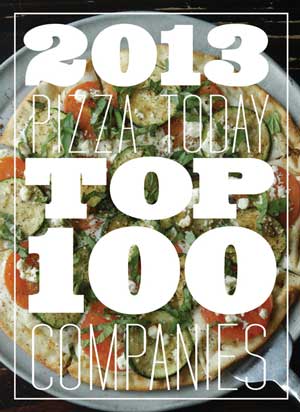 Last month, we published our list of the nation’s 100 most successful independent operations. Now, we present to you our yearly listing of America’s 100 largest pizza chains. Click here to view the list.

SIX UP AND COMERS

#58 Toppers Pizza
Whitewater, Wisconsin
The Midwest pizza company climbed 28 spots from 2012, reporting gross sales of $39.5 million (up from $29 million in 2012). Scott Gittrich opened the first location in 1991. The chain has grown to 49 company-owned and franchised units.

#80 Pizza My Heart
Los Gatos, California
The surf-themed chain moved up 10 places from 2012 and reports gross sales at $28.1 million. Opened in 1981, Pizza My Heart operates 22 company-owned units and one franchised location in the San Francisco Bay area.