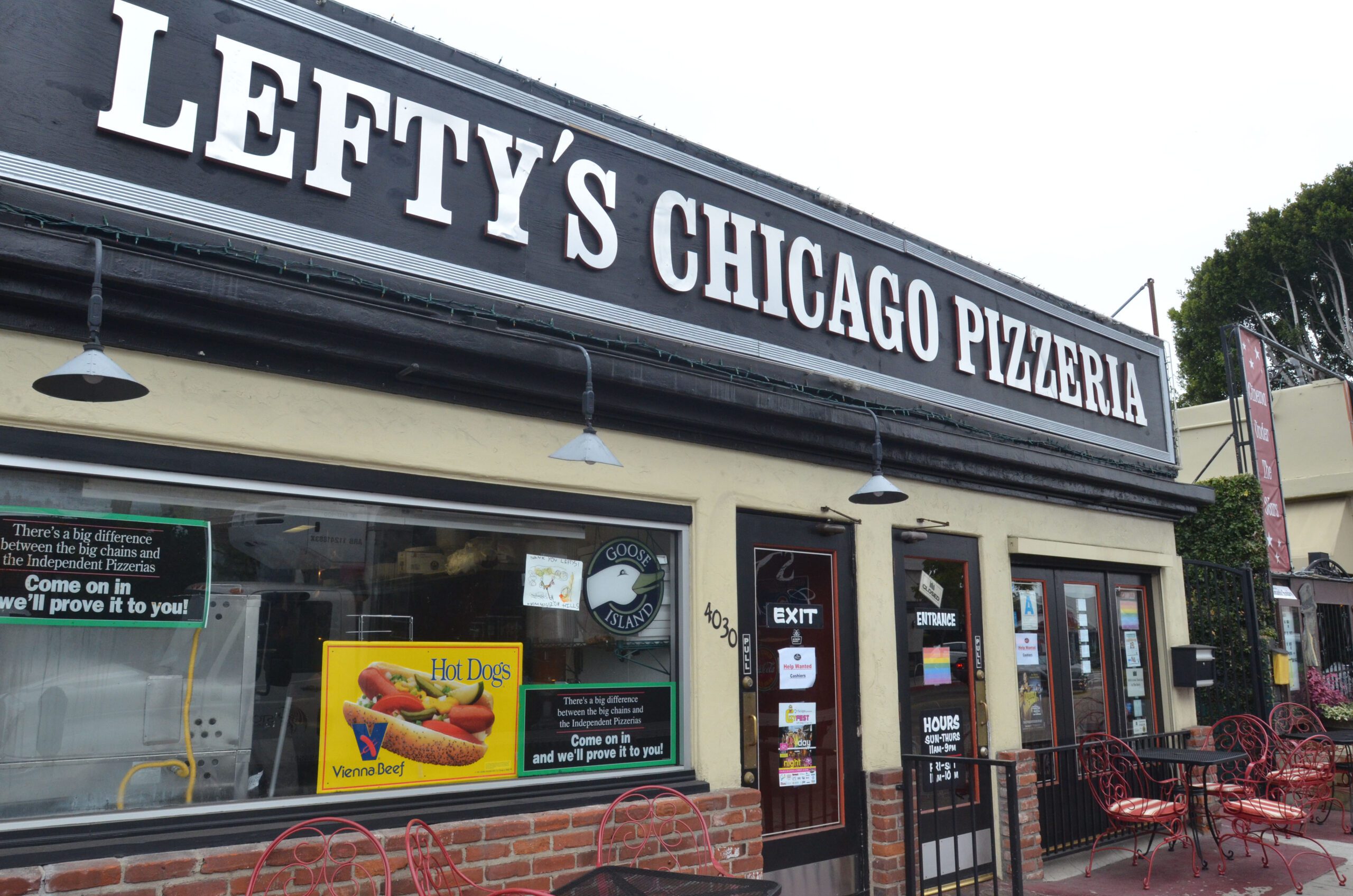 [SlideDeck2 id=576]
Far from the midwest both geographically and culturally, San Diego isn’t exactly the place in which one would expect to find stellar Chicago-style pizza. But that’s exactly what we discovered this summer when our travels took us to the West coast destination known for its beaches and zoo.

Natives of Chicago, Brendan and Lauren Hodson grew up in a city that is renowned for its fascination with pizza, hot dogs and Italian beef sandwiches. When they opted to enter the restaurant business, there was no doubt what items they would place on their menu.

“It was something we all did growing up in Chicago,” Lauren says. “We all either worked in a pizzeria or at beef or hot dog cart. For a lot of Chicago teens, it’s like a rite of passage.”

The original Lefty’s location opened in the North Park area on 30th Street. It became a quick hit with the neighbors.

“People really took to it,” says Brendan. “We were pretty busy from the very beginning and business stayed on a nice, steady climb.”

It wasn’t long before the owners realized they needed a larger space to accommodate demand. That’s how the second location in the Mission Hills neighborhood was born. The Hodsons took over a restaurant building that previously housed an extremely popular barbecue hotspot.

“The guy that owned the barbecue restaurant needed to expand, too,” explains Brendan. “He was doing such high volume — his sales are crazy — that he needed to move into a different area. We came in here first as customers and we knew it was perfect for what we do.”

Not only has business at the second location exploded, but Lauren can’t help but wonder whether a third store should be on the horizon. “I don’t know,” she says with a smile. “It’s something we talk about. I’m more for it than he (Brendan) is.”

While pizza is the star of the show at Lefty’s, the menu is diehard Chicago all the way through. That means the hot dogs and Italian beef sandwiches are taken seriously.

“We make the beef daily,” Brendan says. “We cook it in the morning. It’s heavily seasoned, slowly cooked and then sliced thin. It’s something we take a lot of pride in.”

Was there any concern as to whether West coast palates would adapt to Midwest flavors?

“No, not really,” says Brendan. “It’s definitely way different from what else is out here, but in a good way. People wanted something different with the pizza.”

Adds Lauren: “There are a lot of Chicago transplants out here, too. We have people who come in here all the time who either moved here from Chicago or are visiting from Chicago.”

One thing that did throw the local natives off in the beginning: the long bake times. The deep-dish pizza has a 35-minute bake time. The stuffed pizza takes about an hour to make and bake.

“There certainly was the need for some education there,” says Brendan. “People are used to being able to get a pizza in 15 or 20 minutes. They didn’t understand why the wait would be so long. We had to explain it to them.”

Of course, those who hail from Chicago needed no explanation.

“They already get it,” says Lauren. Did the Hodsons have any concern over whether the beef sandwiches and the Chicago hot dogs would fly?

“No,” says Brendan. “We figured they would do well at lunch. But quite a few people order them later, too. A lot of people get them at dinner. They’ve gone on to be very popular items out here.”

That is a testament to the high quality of the products. The Hodsons are very conscientious about bringing in the best of the best.

“It’s the only way to do it,” Brendan says. “You have to be true to the original, to what you’re duplicating from Chicago. It has to be right. It has to be authentic. Otherwise people will figure it out and call you on it.”

In another effort to be true to the essence of Chicago, the decor makes Windy City transplants feel right at home from the moment they enter the door. There’s no question Chicago is a sports town, and the walls at Lefty’s are adorned with photos and memorbilia that celebrate that. From pictures of historic Wrigley Field (home of the Chicago Cubs) to Walter Payton jerseys to photos of famous baseball announcer Harry Caray, guests definitely feel like they’re in the Windy City when they step into Lefty’s.

“People really get into it,” Lauren says. “When the Blackhawks were playing in the Stanley Cup finals, we heard all about it. Chicagoans are loyal to their sports teams and they support them wholeheartedly. It’s a really fun vibe around here when one of the Chicago teams are doing something big.”

One customer, an ardent White Sox fan, is notorius for his pranks. You see, Cubs memorbilia can be found everywhere you look in Lefty’s. But White Sox items, on the other hand, are reserved for a very special spot.

“The only place you see White Sox stuff is in the bathroom,” says Lauren. And that doesn’t sit well with one customer.

“When the White Sox won the World Series in 2005 we had a customer who would come in here and leave Ozzie Guillen (who was the team’s manager at the time) baseball cards on the tables.”

That type of rapport with guests isn’t built over night. And it’s invaluable to any business.

“We get to know a lot of our customers really well,” says Lauren. “They come in and hang out. It’s nice. It’s a good thing.”

That leads to word of mouth, which makes it easier for Lefty’s to accomplish its goals without spending hoards of money on advertising.

“We prefer to build relationships,” explains Lauren. “It’s the best form of marketing there is.”