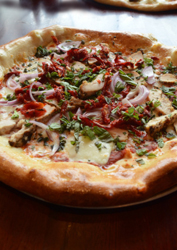 I love this business,” says Sean Kelly, co-owner of Buckhead Pizza Company in Atlanta, Georgia. “I love pizza…more, I love the dining experience.”

Kelly and partner Sam Abdullah have engineered the Buckhead concept around the dining experience. “It’s a fine dining look at pizza,” says Kelly, whose background is fine dining, while Abdulla previously owned a chain of New York-style pizzerias. “No ordering at a counter and we don’t do slice.”

Their vision has paid off with $4 million in annual sales generated from three Atlanta-area company locations. Pizza Today met up with Kelly in the spring at its Buckhead district location, an urban setting of high-rise office buildings, hotels and condominiums.

Walk into the Buckhead store and it becomes quickly evident that attention to detail is front and center. From its sleek sophisticated look to its flow from the waiting area (which features a half-wall separation from the open dining room that seats 130 to the bar area with high tables and dark stone tiled bar), every detail is thought out. A wall of windows backs the bar and opens to a large year-round patio that seat another 50.

A curved wall, that’s actually part of a parking deck, sets off the right side of the room and provided some challenges during the build out. But, in the end, it added to the contemporary design. As a bonus, the shape gave way for a private dining area in the back that is loaded with A/V equipment and able to seat 30. 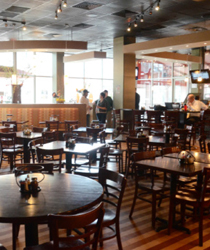 The original Buckhead location in the Atlanta suburb of Buford, which is now a licensed store, opened in February of 2008, followed closely by a Cummings store six months later. In March of 2009, Kelly and Abdullah opened the Buckhead location. “We signed all three leases at the same time,” Kelly says. “Then we staged them so we could have time to get one staffed, trained and opened and then move on to the second one. It was ambitious.”

The partners were comfortable with the concept to move forward with all three locations, Kelly says, adding that the newest location opened in the Galleria district in June of 2011. 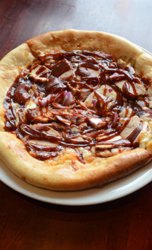 Kelly says they also had a lot of confidence in the product. Pizza makes up 60 percent of the company’s sales with another 10 to 12 percent coming from the remainder of the food menu. Buckhead offers regular, whole wheat and gluten-free dough for pizzas, calzones and flatbread. The Buckhead location produces 500 pounds of dough in house each day. Kelly found semolina to be beneficial to Buckhead’s signature crust for whole wheat and regular dough. “It gives a little more structure to the pizza — lets the bottoms get crispy, but still lets them stay elastic enough that we are able to hand toss them in a timely fashion,” he says.

No raw vegetables go onto pizzas at Buckhead. “All of our toppings, we sauté, roast or bake and season ahead of time,” Kelly says. The restaurant also makes its sausage and sauces in house at each location.

With more than 15 specialty pizzas, several are appropriately named after Atlanta points of interest, like the Piedmont Park, a veggie pizza with eggplant, zucchini, broccoli, yellow squash and sliced tomatoes (a medium for $17); the Smoked Midtown with marinated grilled chicken, sun-dried tomatoes, red onions, fresh basil and smoked mozzarella (a medium for $18) and The Chastain with roasted chicken, onions, capers, a light cream sauce and ricotta (a medium for $17.50).

Buckhead’s menu has been devised with upsell potential. Appetizers are broken down into two categories: small apps (hummus, bruschetta, mozzarella sticks, etc.) that are priced at around $5 and full appetizers (calamari, chicken wings, fried ravioli, etc.) that range in price from $6.50 to $14.95. The strategy was two-fold: it gives servers an easy sell with the small apps and it also provides a promotional avenue to offer a free small app. “I’ve only roped myself into these $5 items that my cost is a buck or $1.25, instead of saying free appetizer,” he says, keeping Buckhead from giving away a higher food cost item like chicken wings. 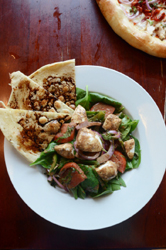 Kelly has introduced a $5 lunch menu. “That’s the starting point,” he says, and everything is an add-on, whether it’s proteins for salads or extra toppings on pizza. “The last time I looked, for January, our average lunch per person was $10.89,” he adds. The company’s locations are in prime areas to attract a business lunch crowd.

In addition to lunch, Buckhead tapped its business district for catering opportunities. Catering makes up one-third of the restaurant’s sales. Kelly attributes its popularity to not setting limits on a catering menu. “I try to tell people there is nothing that we can’t do,” he says, elaborating that they’ve even hosted a Caribbean luau with a Jerk chicken that inspired a popular Jerk Pork Pizza special on its regular menu. 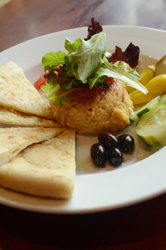 Buckhead also hosts meeting, cocktail parties, and special occasions in the restaurants. Kelly says he works with a hotel chain based in Atlanta for store buyouts. With great audio/visuals and a comprehensive catering menu, Buckhead has positioned itself to capitalize on its neighboring business community.

Kelly has discovered an added attraction for groups: a pizza-making class. It started with offering kids the chance to make their own pizzas. Since kids loved it, Kelly looked for a way to package it for adults as well. Each Buckhead location offers two pizza making classes — The Allegro ($25 per person) that includes hors d’oevres, instruction and ample toppings and The Maestro ($35 per person) which includes hors d’oevres, instruction, ample toppings, dessert-making instruction and a wine tasting.

Meeting planners also sign up for its pizza-making class during business meetings at Buckhead. “When you can get up, stretch your legs, get your hands dirty, make pizza and have a fun time with coworkers…you are totally refreshed and open to the new information.” 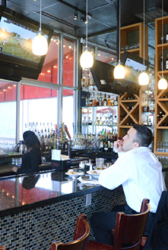 Just as marketing to the business community is key to Buckhead’s success, the restaurant also relies on its returning patrons.At the Cummins location, with a main customer base of families, Kelly shoots to get them in the store a couple times a week, he says, “Whether it’s on Wednesday for trivia, Tuesday for kid’s night, on Sunday for brunch or on Thursday for martini night.”

Buckhead tries to gain as many impressions in the Atlanta market as it possibly can for the four percent of its annual sales that’s devoted to marketing. Kelly finds great value in the $400 to $500 he spends on mass mailers, as well as the expense for traditional advertising. He says even if it doesn’t prompt a visit, the mailers put Buckhead top of mind with consumers. “When we do that radio spot or billboard on the expressway, there is the second time and then when they drive by the restaurant and they see the signage, it all comes together,” he adds. 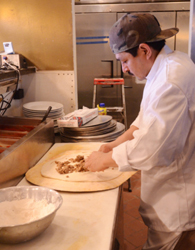 With several hotels in the area, Buckhead markets directly to concierge, valet and bell services staff. “We issue them all a gift card and I can add value to the gift card remotely,” Kelly says. “So every time we get a delivery to the hotel when they are on duty, they get $5 on their gift card.” He also gives them free small app coupons to hand out to guests. Kelly provides the same opportunity to shuttle, limo and cab drivers in the area and a similar program to pharmaceutical reps and meeting planners.

“Those kinds of things are a little off the beaten path, but are very specific and successful,” he says.

Kelly plans to continue these programs as the company grows. Within two years, he looks to add another Atlanta location, as well as one in a new market out of state.