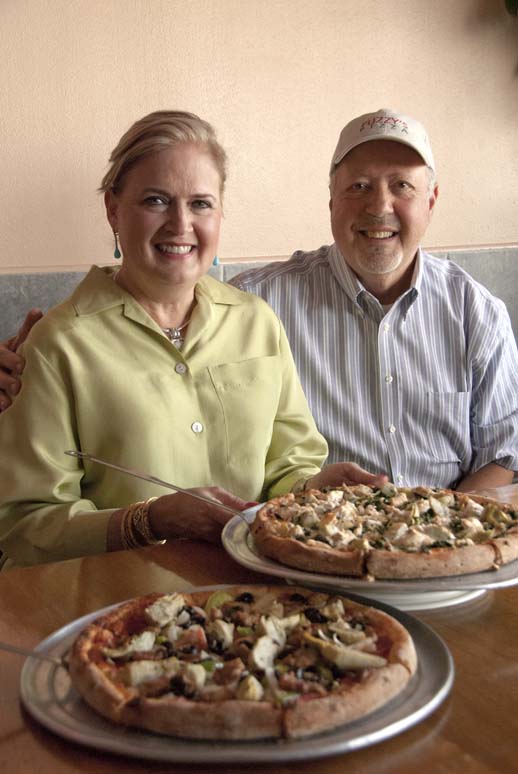 Today, he owns Houston, Texas-based Fuzzy’s Pizza & Cafe, one of Pizza Today’s 2013 “Hot 100 Independent Pizzerias” in the U.S. at No. 91. Pizza Today traveled to Fuzzy’s in February to sit down with Hajjar and his wife, Rita.

The counter-service restaurant resides in a small commercial center that faces perpendicular to a busy street. Its large dining area, with flexible seating for more than 125, is an eclectic mix of neon signs, model airplanes hanging from the ceiling, wine cork art made by a local customer and autographed memorabilia from Fuzzy’s most notable regulars: former President George H.W. Bush and former First Lady Barbara Bush.

“George Bush, our customer, always tells me I’m the American dream,” Fuzzy says. “I came to this country; I only had $50 and I’ve made myself. He’s proud of me and I am proud of myself.”

Success came gradually to Fuzzy. He first opened Fuzzy’s Pizza on Houston’s west side as a carryout and delivery pizzeria in 1986. The shop was a mere 500 square feet with a lone dining table.

“It’s a hard struggle,” Fuzzy says. “It takes time to get going. It took me five years to stand on my feet good.”

As business increased, Fuzzy’s expanded into a neighboring unit to accommodate a dining area. Eventually, the business took over four sections of its building. When traffic overwhelmed its dining area and space next door came available, Fuzzy capitalized on the room to expand.

“We knocked down walls without ever shutting down,” Rita says. “We never shut down. That is the policy.” Reliability has been a key component to the pizzeria’s longevity and it begins with Fuzzy and Rita, who are hands-on operators. “When you own a restaurant, you have to put in a lot of hours,” he says. “I’m here every day.”

Open for nearly 30 years, Fuzzy and Rita are a husband and wife team who really enjoy working together, Rita says. Fuzzy handles back of house, while Rita focuses on front of house. With the couple at the helm daily, they are able to stay on top of controlling consistency.

Product quality is at the core of the operation. “I use high-quality ingredients,” Fuzzy says. “No shortcuts. That’s what makes us successful.” From flour, cheese and tomatoes to meats, he says he always sources the best products he can find. Hamburger is 100-percent beef — no fillers — and sausage is delivered from Chicago.

Fuzzy makes trips to a farmer’s market each week — often multiple times a week — to hand select the pizzeria’s produce. “We buy in small quantities and keep it fresh,” he says. “Rotation is so important to the restaurant business.”

The added space has helped with product rotation at Fuzzy’s. Each station in its above average-sized kitchen has at least one large reach-in cooler. The space also allowed him to add reach-in coolers as the demand grew until it was paramount to invest in a walk-in cooler. The new walk-in houses much of his farmer’s-market finds until they are rotated into the make lines.

Fuzzy credits the farmer’s market produce for the popularity of his salads. With fresh ingredients and house-made dressings, the Greek and Caesar salads are top sellers.

When it comes to Fuzzy’s pizza menu, think variety. The menu features 18 specialty pizzas with a choice of four different styles of crusts — New York, a variation on Chicago-style deep dish and Napoli (extra thin), as well as a premade gluten-free option.

Before opening the pizzeria, Fuzzy says, he did a lot of research as to what type of pizza Houstonians preferred. He found the overwhelming majority gravitated toward New York-style and it’s the most popular in his store.

Being very health-conscious, Fuzzy came up with a dough recipe that incorporates less oil. “I use only one cup of olive oil for a batch,” he says of his 24-hour cold-proofed dough. Even the deep-dish dough uses less oil.

“It’s truly gourmet pizza,” Rita says. Fuzzy’s is known for being generous with its toppings. The most popular specialty pizza is President Bush’s Pizza with artichoke hearts, pepperoni, Canadian bacon, Italian sausage that is pinched onto the pizza, green peppers, mushrooms, onions and black olives ($22.50 for a 12-inch). Fittingly, the No. 2 seller is First Lady Barbara Bush’s Pizza with chicken that has been marinated in its house Italian dressing for 24 hours and baked, spinach that has been cooked in olive oil, mushrooms, artichokes and garlic ($22.95 for a 12-inch).

The pizzeria recently added a huge 24-inch option, in addition to its 12-inch, 16-inch and slices. Fuzzy says it has become a popular selection for families.

Its well-received salads and appetizers have driven dinner check averages to $50. Bottled beer and wine by the glass or bottle at various price points are also an added draw and account for 20 percent of overall sales.

Fuzzy’s relies on its word-of-mouth reputation to attract customers. They don’t push social media. Rather, Fuzzy prefers to let happy customers spread their experiences on Instagram, Facebook and Twitter. The marketing strategy has been highly effective for Fuzzy’s.

A former President of the United States frequenting Fuzzy’s for nearly 20 years adds to its acclaim. “Every time [George H.W. Bush] comes in, he brings people to introduce to Fuzzy,” Rita says, from high-ranking government officials and baseball teams to media representatives from USA Today.

The pieces that are most evident is Fuzzy and Rita’s dedication to the food they serve, their loyal and diverse customer base and their 22 employees.