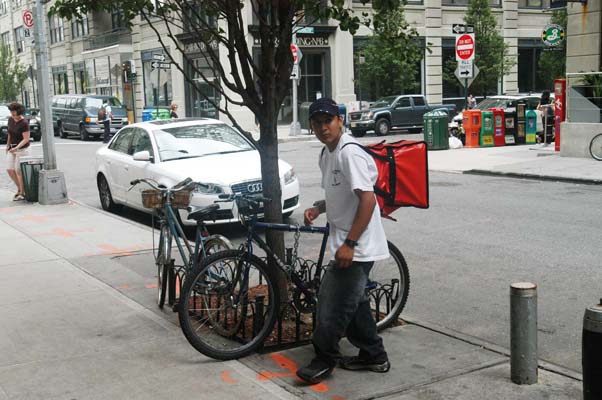 Bicycle Delivery — On a Roll

Bicycle Delivery — On a Roll

Get in gear with bike delivery

With warmer weather in full swing, bicycles could make a smart addition to your pizza delivery fleet. In dense urban areas, delivering pizza on two wheels instead of four can be faster, cheaper and more eco-friendly. Still, operators should also consider safety, maintenance and weather before taking to the road. Read on for a look at benefits, challenges and best practices for bicycle deliveries.

“Bikes can go a lot of places that cars can’t,” points out Shawn Shenefield, director of operations for Upper Crust Pizzeria, which has six locations in the Boston area. “The city is full of one-way streets, and parking is always an issue, so bikes are great.” During the summer, Upper Crust customers often request pizza delivery along the Charles River or on Boston Commons, two places without vehicle access. Upper Crust’s delivery people can ride or walk their mountain bikes right up to the customer.

Bikes can maneuver around college campuses more easily than cars, adds Brent Schepper, co-owner of Fratelli Pizza, which has two locations in Flagstaff, Arizona. The downtown location uses an electric bike for some daytime deliveries. “It’s hard to get on campus with a car during the day,” he says. “The bike allows us to get to just about any building on campus easily. We find that anywhere within about a mile and a half from the store, it is just as fast, if not faster, than a car.” (The operators we talked to had a bicycle delivery radius of one to two miles from the store.)

Andrea Lepore, creative director and founder of Hot Italian, which has locations in Sacramento and Emeryville, California, agrees with the speed factor. Instead of using staffers to deliver by bike, though, Hot Italian contracts with two bike delivery companies to deliver about 250 orders per month in total. “That’s obviously their business so they’re pretty nimble,” she says. “I’ve done a test in a car versus a bike. For some of these shorter distances it’s actually faster by bike.” Hot Italian usually tells customers to allow 45 minutes for bicycle delivery, but the pizzas often arrive sooner.

Bicycles also present a branding opportunity because you can outfit the bikes with your pizzeria’s name and logo. In addition to deliveries, Schepper takes Fratelli’s bike to festivals and events in the area. “It’s a nice marketing tool,” he says. “People get a kick out of it, and they’ll find the pizza place that has a delivery bike.”

Upper Crust even uses bicycle imagery in its logo and its bikes with special branded, insulated pizza boxes trailing behind that have become something of a local icon. “I feel like we really built the brand around the whole thing,” Shenefield says. “We have commercials that feature the guy in a little cartoon on the bike.”

However, you may not get this benefit if you outsource bicycle delivery. The two companies Hot Italian uses, Pedal Express and Edible Pedal, deliver for other restaurants, too, so their bicyclists don’t wear Hot Italian branded T-shirts. Lepore says she might like to eventually bring bicycle delivery in-house and capitalize on the marketing opportunity of branded shirts and delivery boxes.

While bicycle trailers can create buzz, they’re not designed for big corporate or catering orders. Upper Crust’s delivery boxes can carry up to about eight pizzas, so Shenefield says they handle large orders by car. Hot Italian and Fratelli Pizza can carry about the same number of pizzas.

Weather is another limiting factor, so Upper Crust suspends bicycle deliveries during snowy or icy weather. “Most of the guys that do it don’t mind the cold weather or the rain, but unfortunately when it snows, there’s not much we can do on that,” Shanefield says. “With a city like Boston you’re at the mercy of weather.” Fratelli Pizza does not deliver by bike in the winter, but Hot Italian delivers (mostly) year round.

Even in warm, sunny weather, safety is a major concern for bicyclists, especially on crowded city streets. Insurance companies may be wary of bicycle delivery because of the added liability issues associated with bikes (see sidebar).

Maintenance is also a key consideration. Since Hot Italian outsources delivery, Lepore doesn’t have to worry about a flat tire or a broken chain because the delivery companies handle repairs. Upper Crust’s bicyclists use their own bikes (outfitted with a trailer provided by the pizzeria) and do their own maintenance. “If the chain breaks, they know how to fix it,” Shenefield says. Electric bike maintenance requires more technical know-how, so Fratelli has an agreement with a nearby bike shop where they trade pizzas for maintenance.

Despite the challenges, bicycle delivery can create a win-win for operators and their customers. “I think it’s a great feature for customers,” Shenefield says. “They love it, because nowadays people are trying to be more eco-friendly.”

“They would be less likely to obtain worker’s compensation coverage through the standard market,” he says. “It will probably end up in the market of last resort, like the state-run workers’ compensation facilities. Since the bike is not a motorized unit, the liability for it is afforded under the general liability coverage of the restaurant (not an automobile policy).”

He offers these tips on preventing accidents and reducing your potential liability: