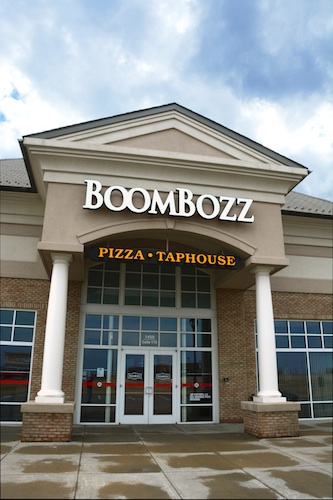 In this industry, we’ve seen plenty of great concepts come and go. The ones with staying power seem to fill several niches –– pizza, sure, but also family dining and the bottom line-boosting bar business. That’s what Tony Palombino has found with Louisville, Kentucky-based Boombozz Pizza & Taphouse. Now on the brink of regional expansion, the ever-evolving concept seems to have hit its sweet spot –– to the tune of more than $8 million in sales.

Palombino, the son of Italian immigrants, grew up in the restaurant business working in his parents’ shops in Florida and Kentucky before eventually setting out on his own in 1994 with a pizzeria in Kansas City, Missouri. While operating Wood Roasted Pizza, he won a culinary pizza title at International Pizza Expo, “and that kind of put me on the map,” he says. He next went to Cincinnati to open a new concept, met his wife and eventually landed in Louisville, where he opened a delivery and takeout pizzeria under the Boombozz brand in 1998.

“What I noticed in Louisville was that there was a niche for gourmet pizza –– what I was already doing –– but gourmet pizza with delivery,” Palombino says. “I wrote down a few things of what customers wanted that they weren’t getting then, and I had this belief that if you have a choice between better or best (pizza), what would you choose? Naturally, you’re going to gravitate toward the best. So I set out to procure the best possible ingredients, from the sausage to the extra-virgin olive oil to the best cheeses, and utilize them in my creations, and deliver that product to your door.”

The first few months were slow, but after some positive publicity in the regional newspaper, business turned around quickly. He opened a second location a year later, but this one catered to a different demographic. The original unit was located in a more affluent area with a good amount of vehicular traffic. The new spot? Lots of foot traffic in a kitschy area of town known for its nightlife. Both locations have lots of competition from some of the best restaurants in the region. “The demand was there, and we had a nice infrastructure,” Palombino says of his decision to open a second location. “We had some great employees, and the majority of them are still with us today. That allowed me to feel comfortable enough to go to the next location.”

After opening and closing a few suburban franchised stores that never really seems to hit their mark, Palombino began to notice a shift in the local dining scene that mirrored national trend –– more people, it seemed, wanted craft beer with their artisan pizza, and he knew just how to give it to them. He remodeled his second location in 2009 and changed the concept to a taphouse model that featured craft beer. By 2011, the brew focus shifted to local and regional breweries, and the taphouse concept took off.

Today, five stores operate under the Boombozz umbrella (four are franchised), with a sixth corporate-owned store expected to open by the end of the year.

“I saw this demand for craft beer, which tied in perfectly with craft pizza,” Palombino says.

Focusing on local breweries early in the craft-beer movement built great partnerships for both parties. “That’s why we have to have the right person or persons to understand the beer side of our business aside from the pizza side of our business,” he says, “because it is a huge component. It is roughly 24 percent of our business –– just craft beer. It just goes hand-in-hand with our pizzas. … We’ve been able to incorporate some of the beers in to our recipes, like our Beer Cheese Queso.

“We also have ‘Tap-It Tuesdays.’ Every Tuesday, we tap a unique beer from a brewery. The brewers are coming to us, saying ‘Tony, we’ve got this unique beer that we haven’t released to anyone else. We want to showcase it at your place first.’ That’s what really makes this exciting.”

Training is critical for the company’s servers and bartenders. Today’s beer drinkers are better educated, but asking if they’d like to try something similar when they order a standard domestic brew –– or better yet, suggest a flight –– has paid off well.

Much is made in-house, from sausage and sauces to salad dressings and marinated chicken. They use conveyor ovens for prep and pizzas that can better handle the high volume at both lunch and dinner.

Dough is made in Dayton, Ohio, and is shipped fresh-frozen, with a three-day lead. Although he’s been in the business for years, a few mishaps with dough early on led him to seek out an external supplier. It was not a decision that Palombino made lightly, but “it’s been great ever since,” he says.

The menu is extensive, including appetizers, sandwiches and calzones, pastas, salad, pizza and desserts, making it versatile for both lunch and dinner day parts.

Palombino knew he wanted to deliver artisan pizza when he drafted his concept, but his two newest taphouse stores in Jeffersonville and Indianapolis, Indiana, do not deliver. “It’s just one of those components that, to add delivery to dine-in, carryout and a bar, something’s going to suffer,” he says. “We do it well in Louisville because we’ve always done it.”

When the first taphouse opened, the franchisee had the option to add delivery but decided against it. “His carryout percentage was hitting about 20 percent,” Palombino says.

After fielding calls from Louisvillians who expected delivery from the brand, the franchisee added it about seven months later. “What we found was it actually took away from carryout,” Palombino says. “Carryout percentages dropped about 15 percent. Your delivery –– it was a wash. It did not add any bottom-line sales. It just cannibalized your carryout.”

“Grassroots (marketing) is still big for us,” Palombino adds, including hosting fund raisers –– at least two or three a week –– for local groups and donations to charitable groups.
Sampling has also been successful, especially in the early days when he couldn’t rely on 15 years of branding and name recognition to bring in business. “Trying to get somebody to eat chicken and potatoes on pizza was a little tough,” he laughs, “But we felt like if we could just get them to try it, we could win them over.

“We set up during soccer games. We’ll show up at a park, we’ll have a sign that says ‘Free Pizza sponsored by Boombozz,’ and we’ll just give it away. We do bounce backs, too. We’ll give them a menu, a (coupon for) a free 8-inch kids’ night pizza. That’s been very, very successful.

“We give away a lot of product still today. We’ve established ourselves in this market, but we still have to keep our market share. Competition is healthy, and it keeps you on your toes.”

As the company began to franchise, Palombino took  a step back and looked at the whole picture –– a necessary part of franchising outside a region. “We have some great partners on the franchising side that are very well-experienced restaurateurs, so it’s not as hard to relinquish that control,” he says. “We all respect the system that is constantly evolving. We have to. And you also have to listen to your franchisees. Some of our franchisees have some wonderful ideas. We meet every quarter and discuss marketing opportunities, menu opportunities, what’s selling, what’s not selling, and then we come up with a plan and we go execute it.”

Every location goes through a quarterly inspection, a pass/fail occurrence that holds franchisees accountable and helps uphold brand integrity. With proven systems in place and a viable concept, Boombozz Pizza & Taphouse is looking for regional growth first before greater expansion.

“The reward always comes after the work,” Palombino says. “Always. You can’t skip any steps. … The hard knocks that come after that are always the hardest to overcome. I speak at business schools and I tell them the same thing: ‘Here are the rewards, and yeah, the biggest reward might be financial and that’s great. But, if you truly take where you came from, where you started, and you go back in the kitchen and you see the employees back there –– the people who have been with you for the past 15 years –– that, for me, is the greatest reward.”