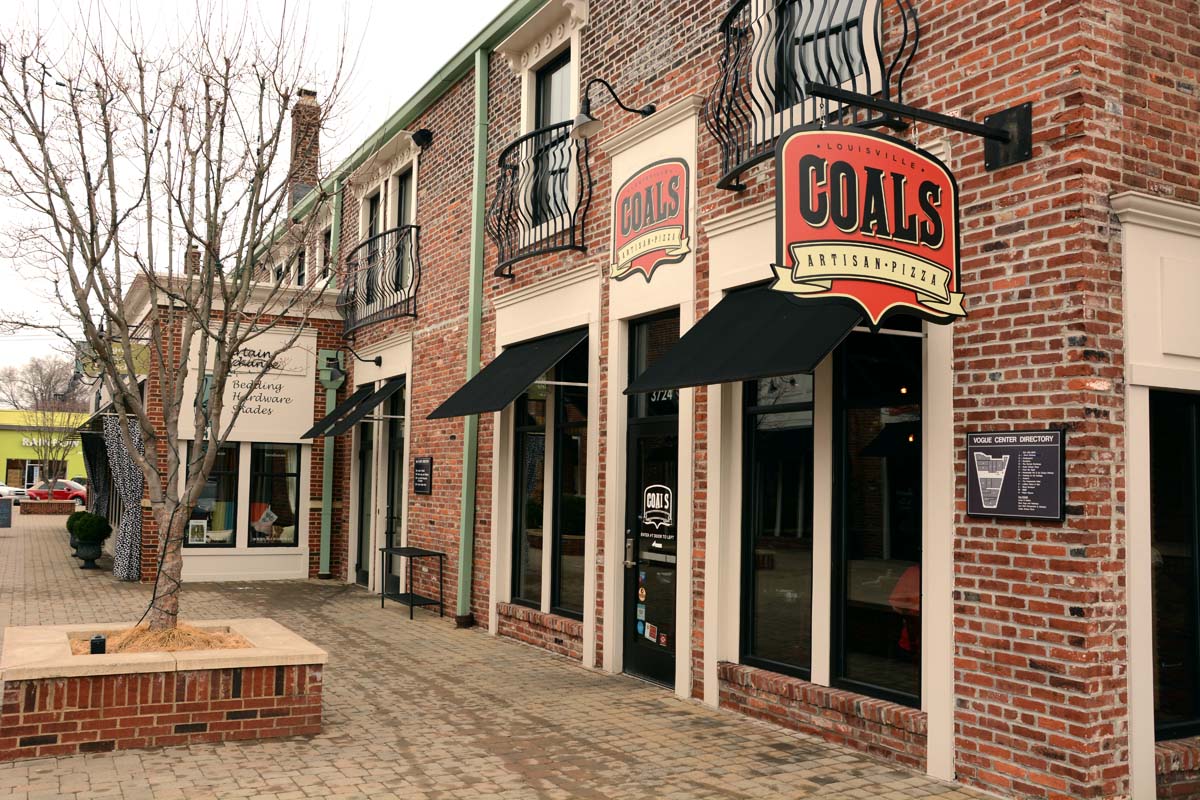 The pizzeria is tucked into a strip mall and flanked by a yoga studio, jewelry store and high-end clothier –– just the place for upscale Coals Artisan Pizza in Louisville, Kentucky. Restaurateur Mark Peters knew exactly what he was looking for when he left food manufacturing for pies, and the three-year-old coal-fired pizzeria has been turning heads ever since.

Peters and his wife, Madeline, started their own calzone business in Seattle in the late 1980s and were so successful that their product eventually landed on the national retail market. In 2008, they opened a calzone manufacturing facility in Oklahoma and sold it to an investor a year later. “All that time, for 22 years, we had been students of artisan pizza, and of dough,” Peters says, and after selling their business they undertook a cross-country road trip that landed them in some of the best pizzerias in the country.

Peters then took a five-day pizza course at Tony Gemignani’s International School of Pizza, and the couple began to formulate a plan to open their own restaurant. They landed in Louisville, where they had family but noticed a lack of handcrafted, Old-World artisan pizza, and thus Coals was born in 2011.

There has been a bit of a learning curve in teaching Louisville to appreciate upscale pizza and the costs associated with making it (the city is home to one of the three largest pizza chains in the country), but excellent word-of-mouth, positive local press and a perfect location with lots of traffic and parking have made Coals successful nearly from its inception. “There was a core group who knew what we were doing and were looking for it,” Peters says. “I always ask people ‘Oh, how did you hear about us?’ and most people say a friend told them about us.”

Sales sit at more than $1 million just three years after opening, and the company has plans for its second location to open in a nearby suburb. Pizza accounts for 68 percent of the company’s 80-percent food sales. Alcohol accounts for 20 percent of sales, but wine is a better seller than beer at Coals.

“That gives you an idea about our demographic, so we try to target that with mailers (as advertising), and we think we’ve seen a benefit there,” Peters says.

Ninety percent of sales are dine-in, with 10 percent carryout and no delivery offered. “The pie wouldn’t stand it,” Peters explains.

Careful consideration went into creating Coals’ menu. The pizzas are all named after local neighborhoods because “we wanted people to know we’re a Louisville-based, original business,” Peter says.

Among the top sellers is the Waverly, which pairs prosciutto with fig jam, Asiago, mozzarella, Gorgonzola, a balsamic reduction and shaved Parmesan. “When we opened and people saw that Waverly, they said ‘you’ve gotta be kidding me. That is ridiculous.’ And within three months it grew to be in our top three (sellers), and it stays there now.”

Most everything is made in-house (including drool-worthy desserts), from the dressings to the arancini and meatballs. Even the tiramisu is made entirely from scratch, right down to the ladyfinger base. “Further, we home-make the chocolate meringue,” Peters explains. “We blend the chocolate using Guittard chocolate. We blend it, we spread it, we chill it, everything.”

With so much being made from scratch, labor costs are admittedly high. “Our labor costs –– people might tell me there’s room to move there,” Peters says, but creating so much in house reduces waste and food costs and elevates the brand in the local market.

Also imperative to that success is the company’s dough. “We had done our research, and we knew we wanted to use a cold-rise method. We therefore knew that we would have to spend about $8,000 on airtight dough boxes in order to have enough inventory,” Peters says. They’ll make 80 pounds a day which is cut into 8-inch rounds for lunch and 12 inches at dinner.

Salads are also big movers, including the Coal’s Chop Chop, a chopped salad served with flatbread and a house Italian dressing, and a fresh Gorgonzola Wedge with bacon, tomatoes, onions and radishes in a house-made Gorgonzola dressing. While salads are seemingly a place to cut corners in many pizzerias where they’re simply an after thought, “we still spend $11.50 a pound on our bleu cheese,” Peters says. “We knew we wanted to do that.”

Aside from pizzas and salads, there’s a short menu of appetizers and sandwiches. “Our kitchen loves to create, and we love to turn them loose,” Peters says.

Central to Coals’ success is the company’s oven, which burns anthracite over traditional coal in a 5-foot by 9-foot deck. The derivative burns cleaner, Peters says, and gives the restaurant exclusivity in the Louisville market. It’s difficult –– akin to “steering a battleship,” he adds –– and bakes at 575 F (upwards of 925 F in the dome), which takes some skill to maintain.

“When we first started, we had a day where we got the dome over 1,300 degrees,” Peters says. “That’s a train wreck. You’re going to ruin every pizza within sight. You have to really learn it, and our guys really embrace it. Some of them call it ‘The Beast.’ ”

Training is critical, with pizza makers earning their pizzaiolo titles after mastering everything from dishwashing and prep to topping pizzas and perfecting them in the oven. “It’s all in the stretch,” Peters says. “I’ve tried and tried. I’ve made thousands of (pizzas) and I’m still not as good as these guys.”

They’re not only good, but they’re fast. “I was surprised at what it takes to put together over a million in sales,” Peters says. “It takes a whole lot of pies going out the door.”

On a busy Friday night, the restaurant staffs up to 20 people and overflow spills to upstairs seating and outward onto the lucrative patio. The additional 24 seats outside can comprise up to 28 percent of yearly revenue, a big boon for any restaurant.

Staffing can be difficult with a patio, especially when weather affects business. “Think about how tough that can be when you have to crew for the patio, and you don’t know what the weather’s going to be,” Peters says. “It’s a real challenge.”

With the right staff in place, though, Peters is ready to open the company’s second location this year in a new 3,800-square-foot space in a  nearby suburb. How did they know they were ready? “We have the financial ability to do it without taking out loans, and that’s key,” he says.

“We (also) have management depth. We have tons of it, and people that are excited about being what I call ‘pebbles in a pond.’ People are here and they’ll go over to (the second location), and they’ll spread the culture.”