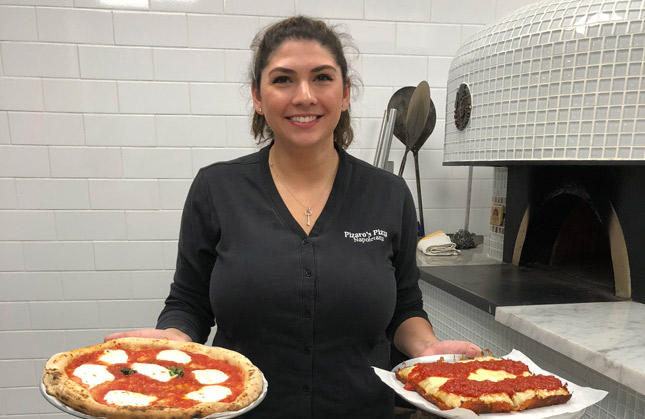 Owner Nicole Bean has recently moved Pizaro’s Pizza out of its original location and into a larger and updated location nearby that could handle its three pizza styles.

We operate a fast-casual concept with two locations serving Napoletana, New York and Detroit-style pizzas. We offer a simple counter service and table delivery without the hassle of servers or wait staff. We also serve both beer and wine in addition to B.Y.O.B (small corkage fee applied).

We opened in 2011 with Napoletana style pizzas.
There was a lot of education with customers during the first year and tons of feedback about wanting more toppings and a more substantial crust to hold those toppings from those who didn’t quite understand the concept of Napoletana pizza. We knew our Napoletana was great and didn’t take long to catch on here in Houston, but we wanted to give customers something more. After opening our second and larger location (closer to downtown) in 2015, I went out to San Francisco to Tony’s International School of Pizza to learn to make Detroit-style while also learning Chicago, New York and Sicilian. Matt and I launched Detroit six months after I got back from school. I used only social media and local press to spread the word on our newest baby. Response to our Detroit went better than expected and continues to grow. It was only a year ago (2017) that we launched New York-style, which took us 10 months of development with dough, tomatoes, cheese and market testing.

All three styles are thriving, they are almost to an even split among the orders.

There is also a possibility of a new style coming…

We got tired of telling people “no;” Napoletana is challenging to keep authentic in the United States. Educating customers helped, but we still had to cut people back from piling on the toppings, which made both the customer and us unhappy.

Detroit was a great solution. We had a thick enough dough to hold more toppings and the sauce went on top; it was a no-brainer, plus the cheddar crust … People love that cheddar crust!

After getting our handle on making two styles and seeing that our customers loved having an additional option, we knew the time was right to get going on New York. It had to be more rigid (than Napoletana) with a bit of a crunch. We were listening to what our customers were seeking out. New York style was the answer and so we began the process. As soon as we started posting on Instagram about testing it, people started calling and coming in asking about the New York style even before we launched it. The response was overwhelming!

Now, we have all three styles at the re-location of our original store.