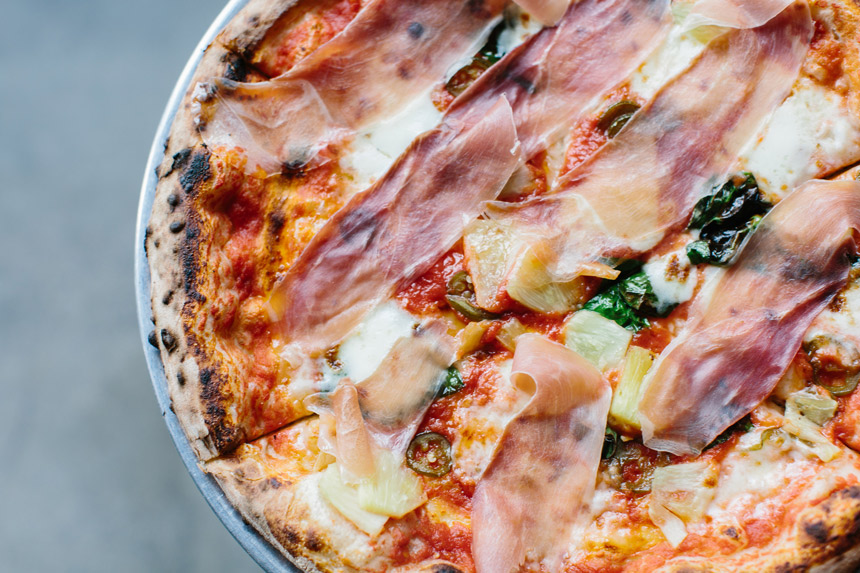 King Dough opened its brick-and-mortar location in 2015 after a year operating a mobile oven. The wood-fired pizzeria, Owner Adam Sweet says, “bridges the gap between a weirdo rock-and-roll pizzeria and a responsible sourced, farmer driven (and) impeccable technique restaurant.” Fans go wild for the Grape and Gorgonzola pizza with fresh mozzarella, red grapes, EVOO, honey and arugula. Sweet also shares that King Dough is working on a second location in nearby Indianapolis.

The Upper East Side counter shop opened in 2016. Owners Matthew Porter and Tom DeGrezia trademarked their own creation, The DoughDici. It was a limited-time-only and super thick pan pizza with a 12-hour rise time in special pans. To order the pizza, patrons purchased $38 online tickets for two to The DoughDici Experience. NYC foodies went crazy. Word is that it may ‘rise’ again. Sophia also has an assortment of round and square pies, as well as slices.

That’s A Some Pizza  | Bainbridge, Washington

Second-generation owner Will Grant says, the 33-year-old pizzeria uses a 120-year-old starter from the Klondike Gold Rush. The Frog Rock is a pesto base pizza with a mozzarella/provolone cheese mix, sausage, artichoke hearts and sundried tomatoes. The gorgonzola vegetarian has a gorgonzola dressing as a base with mozzarella/provolone cheese mix, feta cheese, mushrooms, pine nuts, red onions and garlic.

The punk-rock pizza shop has picked up quite the following for its New York slices in the South Grand District. It deviates from master pizzaiolo Scott Sandler’s previous Neapolitan-style restaurant with a New York attitude. Pizza Head has gained its popularity without a slice of meat on the premise. It serves up an all vegetarian menu. Pizza Head’s pepperoni and sausage have made fans of carnivores. Vegan customers can opt for a cashew-based cheese and Parmesan.