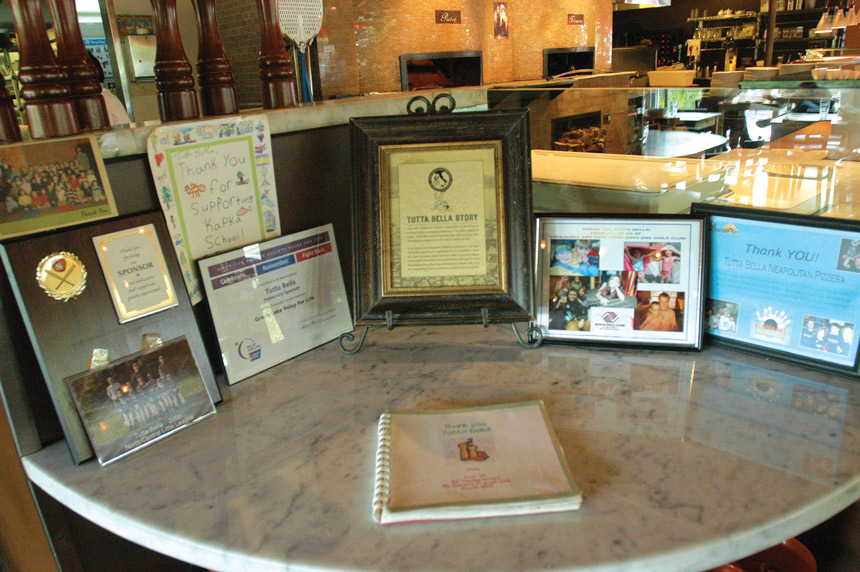 Operators say they have criteria for choosing which nonprofits to support

James Tzepos, owner of Zois’ Pizza in Seymour, Connecticut, fields many requests from community organizations to partner with them for a fundraiser or to donate money or pizza.

“I get so many in the mail, or somebody walks in and hands me something and says, ‘Here is a flyer from my son’s school,’” he says. “You can’t give to all charities. You have to pick certain things.”

Instead of making a quick decision, he looks at the stack of written requests every two weeks when he pays bills. He uses certain criteria to help him decide what causes to support. For example, the organization must be local, such as schools, recreational teams, volunteer organizations, or his church. He mails the organization a gift card, usually for $50 or $100. He gives to groups only, not individuals. “I don’t do, ‘My kid is going to Disney, help her raise money,’” he says.

Some efforts are not one-time donations but larger, ongoing partnerships. Last year Tzepos agreed to a 10-year commitment in which he would donate $1,000 a year to the Seymour Annual Christmas Parade, which passes close to the pizzeria and is an important community event. “They were low on funds,” he says.

Last year Zois’ Pizza debuted an annual pizza-eating contest to raise money for Project Purple, a Beacon Falls, Connecticut-based not-for-profit organization that raises funds and awareness for pancreatic cancer. Individuals must raise $250, and teams must raise $300 to enter, and they race to eat several pizzas within a certain time. The theme of speed is relevant, Tzepos says. “How fast you eat is related to pancreatic cancer. It’s the quickest form of cancer. Once they find out you have it, it’s too late.”

The contest has been a big success, even attracting professional competitive eaters from out of state. The judges are local police, and contestants must be 18 or older. A radio station promotes the event, and Zois’ Pizza earns much positive publicity.

Operators agree that it is important to adhere to guidelines when choosing a community partner. Bill Jacobs, owner of Piece Pizzeria and Brewery in Chicago, says his biggest criteria is that it has to be a local charity, and he needs at least six weeks’ notice if someone wants pies for a fundraising event.

“We support schools, theater companies, animal shelters, families in need,” he says. “I want to be

approached with plenty of time. I don’t like when someone says, ‘We’re having this event in a week.’”

Piece Pizzeria supports organizations that are consistent with Jacobs’ ideals. If a group is controversial or simply represents something Jacobs does not support, he is polite and timely with his rejection. “I respond almost immediately, especially when we can’t support an organization, and I think that’s the most important thing to do,” he says. “People appreciate a response. If you blow them off no one feels good about that.”

His other criteria is that the charity has to be in the Wicker Park or Bucktown neighborhoods, which are near Piece Pizzeria. One larger partnership that he entered was the 606, a system of elevated trails and a park built on a former train line. Piece donated $1,000 to the project and made a drone video of Piece employees jogging on the trail, then standing in a field forming the Piece logo.

Partnering with a local charity is a good way to not only give back to the community, but also to meet people in the area. “Something we really worked on is trying to create programs that are sustainable,” says Meggie Lindberg, public relations and marketing manager for Malnati Organization, Inc., in Chicago. “We want to be seen as a neighborhood pizza and community gathering place.”

The 46-location Lou Malnati’s Pizzeria donates gift cards and also gets involved in larger events. One location, in a former firehouse in Naperville, Illinois, recently hosted an event to raise money for Naperville Firehouse No. 1. The restaurant donated pizza, and firefighters offered public tours of the trucks.

“It was an opportunity for us to give back and for us to build relationships and be an active participant in the community,” Lindberg says.

It is always a good idea to support local charities, says Joel Mehr, owner of Pete’s New Haven Style Apizza, with four locations in the Washington D.C. area. “We look to support the people that support us. First and foremost, it’s the schools. We are a very family-oriented restaurant.”

Pete’s New Haven Style Apizza hosts a charity night for each of its partner schools twice a year. He also donates gift cards to their auctions. And if there is a PTA meeting he donates pizzas. If there is a neighborhood cleanup, he offers free pizza to the volunteers who come in that day.

Ideally, all the organizations that ask for donations are legitimate. Sometimes the organization sends documents to show they are a 501(c)3 organization. If not, Mehr doesn’t worry. “We’re giving free stuff away, but we hope we pick up new customers in the process,” he says. “So worst case scenario, someone scammed me out of a $50 gift certificate … but I hope they enjoyed the food.”

Please Fill Out an Application

Pinthouse Pizza Craft Brewpub, with two locations in Austin, Texas, offers The Charity Brew program. Every month it features a special beer for an event, and donates proceeds of the sale of the beer to a charity partner. The program has become so successful that Pinthouse Pizza launched a Web site form providing an application process to help the restaurant screen potential partners.

“We’re interested in supporting our immediate neighbors in their ventures, and the screening process assists in qualifying applicants,” says Kyle Detrick, co-owner and operator. “It also provides a mechanism for queueing up potential partners, as we book the Charity Brew schedule out over a year in advance.”

The charity partners have to do their part. They tap their existing network to promote the event by e-mail, mailers, on-site marketing materials and social media. “The superstar partners support the event on-site all day, engaging customers regarding their non-profit and soliciting donations or raffle ticket sales to augment the Pinthouse direct donations,” Detrick says.