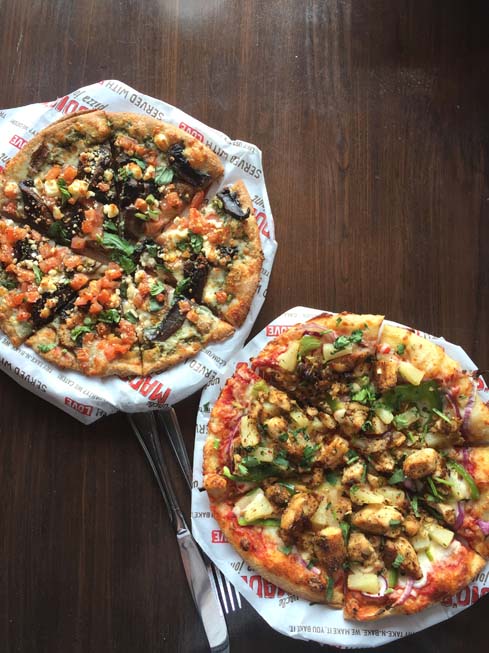 The movement has legs, and here’s why

The race to find success in the fast casual pizza category has turned into an all-out sprint as large and small companies alike look to leave their marks on the rapidly developing segment. The model, proven so successful in other dining niches — namely sandwiches and Mexican — appears to have massive legs in terms of pizza potential. And that’s precisely why companies like Buffalo Wild Wings and Chipotle (the brand most credited for inspiring the category) are pouring resources into fast casual pizza. They’re betting on rapid and sustained growth that will spark greater lunchtime pizza sales.

The gist of the concept: to marry quality with speed. No more 20-minute waits for an artisan pizza. No more re-heated, stale slices in under a minute. Fast casual seeks to take fresh, high quality and artisan ingredients and get the order processed, paid and filled in mere minutes.

Another important component is customization. While pizzerias have always had lengthy topping lists and pizza has long been the world’s most customizable popular food, fast casual makes customization more evident by presenting the choices to the customer from the start.

“When you walk into a fast casual pizzeria, you see all the vibrant toppings laid out right in front of you,” says Sean Brauser, whose own fast-casual concept, PizzaFire, launched in Akron, Ohio last year. “The customer sees the choices right away, and he sees that the options are high quality and fresh. It’s very appealing.”

For more on some of the crucial components to fast casual, check out Associate Editor Denise Greer’s article titled “Down the Line: Fast-Casual Pizza Kitchens Streamline System Execution”.

As for Brauser, fast casual presents an opportunity in an industry in which he’s already found success. He founded Romeo’s Pizza, which is based in Medina, Ohio, about 45 minutes southeast of Cleveland. Romeo’s ranks No. 94 on Pizza Today’s Top 100 Pizza Companies list with 36 locations and $22.5 million in sales. With PizzaFire, Brauser sees a wave of excitement that he believes has been a long-time coming.

“There’s nothing like it,” he proclaims when Pizza Today spoke to him briefly about PizzaFire at International Pizza Expo in Las Vegas. “This is a big deal. A really big deal. Something this big and this game-changing hasn’t hit our industry since delivery.”

Brauser says he plans to expand PizzaFire quickly with the hopes of locking down the Cleveland market before major fast casual players such as Blaze Pizza or PizzaRev hit the scene.

That seems to be the focal point of Kevin Harris as well. Harris, whom we also spoke to at International Pizza Expo, is hoping to open his first pizzeria in the Houston market in the next 8-12 months. He was at Expo in Las Vegas to source vendors and take advantage of the lineup of educational seminars at the show. While he felt as though he had a good handle on ingredients, Harris said his primary goal was to look at and talk to equipment reps. While he looked over new technology on a fast-bake oven, Harris shared his reasons for settling on fast casual over a more traditional pizzeria.

“It’s just so hot right now,” he says. “It has a lot of buzz and energy behind it. From what I’ve seen by looking around at a few of the players in the market, the customers don’t expect you to have a huge, fancy and expensive buildout. The stores are pretty bare bones. They’re appealing, but it’s almost like a fast-food joint in terms of the way the seating and décor are laid out. It’s about getting the customer in and out the door. Big, quick turnover.”

Harris is right in that a spartan look seems to dominate the fast casual scene. Customers don’t visit these establishments to linger, so there’s no need for muted lighting, cozy seating or easy listening coffee-shop jazz. It’s about a quick pace without compromising on the food.

“That’s the trick,” explains Harris. “It’s not fast food. You are in and out fast as though you’d been to a McDonald’s, but the food was in line with what you’d get in a pizzeria that requires you to wait 20 minutes.”

On a large scale, players like the aforementioned PizzaRev and Blaze are fighting to become the dominant national player. But the competition lining up to square off with them is fierce and growing by the day. Concepts like Pie Five Pizza, MOD Pizza, Uncle Maddio’s, The Pizza Studio, Live Basil, Project Pie, 1,000 Degrees Pizza, Persona Wood-Fired Pizza and others want a piece of the action as well.

Is there enough room to accommodate all of them, or will they cannibalize one another amidst the fight for market share? Brauser thinks there is room for those who get in the game early.

That certainly turned out to be a recipe for success in the take-and-bake model. Unlike take-and-bake, however, fast casual doesn’t carry built-in educational challenges. No one has to be told how to cook the pizza at home. They simply choose a pizza off the menu or point to the ingredients they want if they are customizing their order.

“Be the first to enter your market,” Brauser advises. “Splash your brand across a city and make a name for yourself before the big guys come in. Do that and you will be okay. This is a big wave that’s coming. A lot of people are looking to ride it. Those who get on it early have the best chance for success.”