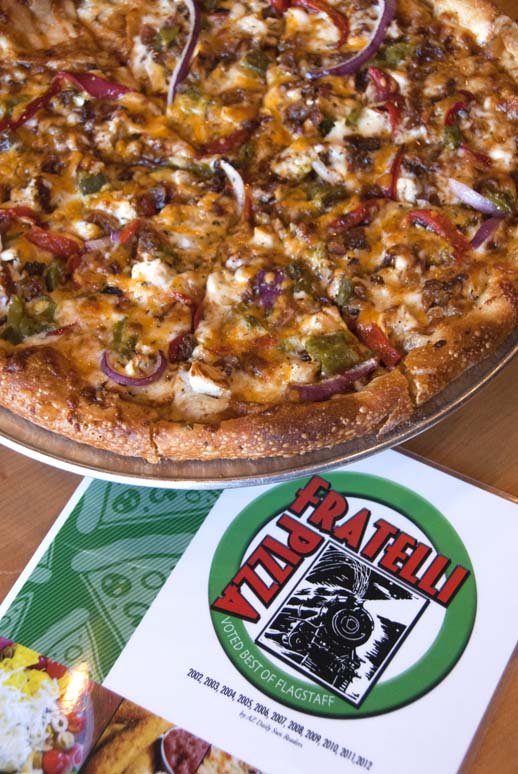 The Schepper brothers opened Fratelli as a 450-square foot pizzeria with seating for four near the University of Northern Arizona in downtown Flagstaff in 2002. After managing chain and independent pizzerias, Pete says, “I got tired of making other people money. Who better to go into business with than your brother?”

By year two, they opened a second Fratelli Pizza in an old Pizza Hut in Flagstaff’s east side. And in 2006, the Schepper brothers closed the original Fratelli location to open another larger, dine-in unit on Phoenix Avenue in downtown Flagstaff.

In the early days, Brent says, “We did grassroots marketing. We went to all the businesses and offices and gave samples away — gave them free slice cards.” Their efforts paid off during Fratelli’s first summer when the pizzeria was voted “Best of Flagstaff” by the Arizona Daily Sun, a title it’s held for 11 consecutive years. “That really helped us take off,” he adds.

The pizza, Pete says, is Fratelli’s own style. Based on an East Coast style, its pizzas are hand tossed and cooked in deck ovens.

Giant slices are king during lunch and only sold until 4 p.m. Slices make up 50 percent of lunch sales. “Our lunch slice specials are our biggest thing,” Brent says of its “two slices and a soda for $7” offer. Slice toppings vary and rotate weekly onto a specials menu.

Brent says Pete’s the recipe guy. Pete credits the kitchen crew for coming up with some creative pies. Fratelli’s regular menu consists of 15 traditional, specialty and pan pizzas. Two of the local or crew favorites are the Pesto Cashew and the Route 66. The Pesto Cashew has a basil pesto base and is topped with mozzarella, grilled chicken, roasted cashews, red onion, mushroom and bleu cheese crumbles.

The Route 66, Pete says, pays homage to its namesake, the famed highway, with its Kansas City bbq sauce, bacon from the Midwest and green chilies from Hatch, New Mexico. Those ingredients are paired with mozzarella and cheddar cheese, roasted red pepper, grilled chicken and red onion for a Fratelli best seller.

An obvious favorite is the traditional pepperoni pizza. Pete says what makes Fratelli’s unique is that it uses an uncured pepperoni, which offers a robust flavor and pleases its health-conscious customers.

Hoosier natives, Peter moved to Flagstaff in 1994 and Brent soon followed to pursue the business together. Both have become fixtures in the Flagstaff community. That commitment to outreach has extended to Fratelli Pizza. Brent says, the pizzeria was one of the first in Flagstaff to hold fundraising nights.

Fratelli’s has devoted “10-percent Tuesdays” to local charities, schools and nonprofits for nearly 6 years. “We’re a very tightknit community,” Brent says. “ It’s showing we care — that we are actively involved in this business.”

Flagstaff residents have taken notice. After a 10-percent Tuesday event, “the other days (sales) are up because I’m getting a half dozen new customers every time I do one of those events,” Brent says.

Brent considers 10-percent Tuesday a marketing line item. More than $20,000 of its $30,000-marketing spending goes to those organizational fundraisers. He adds that the only traditional advertising the pizzeria participates in is sponsoring public radio.

The pizzeria also holds four to five blood drives per year and free field trips for kids. “A lot of kids have never seen a commercial kitchen,” Brent says, adding that the trips include a tour, dough tossing and pizza-making demonstrations and dough ball samples for the kids to play with.

After sponsoring several community events, the Scheppers invested in a mobile unit, opting to go with a trailer. “The reason we went with the trailer was to be able to leave it, get more supplies and come back,” Brent says.

With a four-deck oven, Fratelli is able to do high-volume events. The trailer is used for large-scale events versus setting up for street vending. “It’s a four-hour setup time and two-hour breakdown time,” Brent says. “We want to do the big events and stay away from smaller events.” Fratelli catered three weddings using the trailer last fall. It’s something that Brent hopes continues.

When it came time to completely renovate its Phoenix Avenue location in 2012, the brothers contemplated using the trailer during construction. Instead, they opted against it and closed for six weeks to remodel the store. Brent says using the trailer might have set the construction schedule back.

In a cunning maneuver, the Scheppers caught the entire construction process on a time-lapse camera and produced a video to show Fratelli’s loyal customers the step-by-step remodel.

The dining room expansion now seats 77, up from 45 before the remodel. The reconfiguration of four-top tables has allowed for optimal seating.

Brent offers one last piece of advice for pizzeria operators: “Pick a number and triple it. I picked a number and doubled it and it wasn’t enough. I could easily spend another $50,000 to finish our office upstairs.”