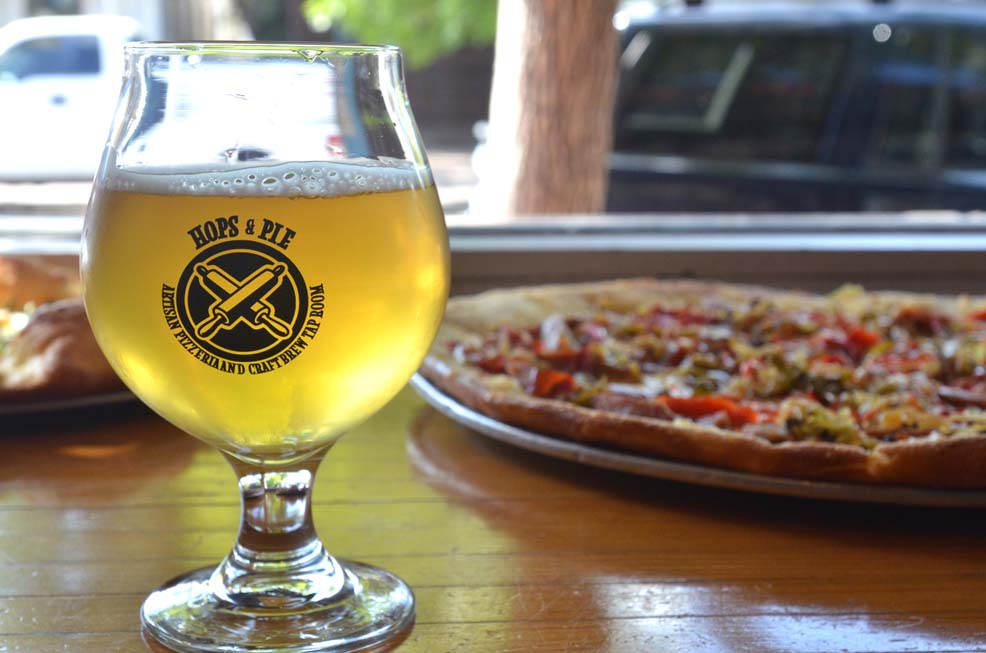 Denver, Colorado ,ranks as one of most notable craft beer cities in the country. Amid its brewing explosion, Hops & Pie has become a top beer and pizza lovers’ destination.

Restaurateurs Drew and Leah Watson have weaved together a dynamic and unique approach to craft beer with an approachable fine dining take on comfort foods. The formula has reaped a profitable pizzeria and taproom operation that generates $2.1 million in annual sales.

Tapping into the onset of a craft beer movement wasn’t so much a forecast as a bit of luck when self-proclaimed “beer geeks” Drew and Leah opened Hops & Pie four years ago in the Berkley neighborhood of North Denver. “We were basically doing the beer geek part for us and a select few who we knew were also beer geeks,” Drew says.

Beer bloggers quickly discovered Hops & Pie in its infancy — which happened to coincide with a renaissance of craft brewers. “We became a beer geek destination because they know when they come here they are going to have something that they haven’t had before — odds are pretty good,” Drew says.

Hops & Pie’s beer strategy is simple — rotate unique and rare, mostly American, craft beers from its 22 taps. Drew says that never saying “no” when a new craft brewer asks the pizzeria to pour their beer contributed to the beer program’s success.

Getting in on the ground floor of the craft beer boom in the Mile High City has also given the Watsons the clout to go after the most coveted craft beers, like tapping a single keg of the exclusive Pliny the Younger. “People will drive hours and there is a whole line out there hours before we open just to get it,” Drew says. “We have to sit at the door with tickets,” Drew says. “The first 60 people through the door get a ticket and that ensures you a pour and then we tap it two hours later.”

The Watsons collaborate with a local brewery for its original house beer, Hop 26, a West Coast-style IPA.

Hops & Pie’s beer club and its 300 active members are vital to the business. The Watsons roll out the red carpet for club members with such benefits as offering pours of hard-to-find beers and opening an hour early each Sunday exclusively for club members only. “A membership is $60 for the year,” Drew says. “It gets you happy hour all of the time, which is $1 off slices and drafts — if a draft is over $8, we don’t discount it. One Sunday a month we offer 50-cent select drafts for beer club members. Every Sunday that isn’t 50 cents, they get their third draft on the house.”

The pizzeria often hosts tap takeovers and beer specific festivals, like its fall Pumpkin Fest featuring 12 of the seasonal beers.

Craft beer in cans is widely popular at Hops & Pie. “We have $2-craft-can night, which is insanity,” Drew says. “We have anywhere from 8 to 12 offerings and they always eat when they come in.

“We also do Tuesday Night 23. You get an 18-inch, two-topping pie and two drafts for $23.” Ending the week, Hops & Pie offers the Saturday Afternoon Session. “From noon-five, you get three drafts and two slices for $16,” Drew says. “This and can night are probably our biggest draw.”

Beer has contributed to the ample amount of the press that the restaurant generates, Drew says. It carries the sales weight, as well. “People always use their food as their loss leader,” he continues. “We use our alcohol, which a lot of people thought we were stupid for that too. We use beer for that because it’s a bigger draw.”

“I use the term ‘artisan’, which now has kind of gotten bastardized,” Drew says. “That word used to mean a lot to me. It used to mean you were a craftsman. You had a craft. You were skilled. Now I see it on a box of (crackers).

“We cook right on the stones. There are no screens. We roll our dough out in Semolina instead of cornmeal or flour because that is something that I grew up around.”

Hops & Pie’s unique crust consisted of a 50/50 split of water and the house IPA. Drew says its robust flavor derives from its three-day fermentation. “We mix, roll, refrigerate,” he says. “There is no sugar in there except for the sugars from the beer and the natural sugars in the flour and that is what the yeast is eating.”

Pizza accounts for 70 percent of food sales. Ham hock and pork loin smoked in house are among the more than 40 toppings to choose from. The Artisan Pie of the Month is a popular selection. Recently, Hops & Pie featured a duck confit pizza with dried tart cherries, Applewood smoked bacon, caramelized onions, rosemary and goat cheese finished with baby arugula and a citrus vinaigrette ($22 for a 16-inch).

Slice of the Day is also a top seller like the pesto chicken with cherry tomatoes and roasted garlic.

Mac and Cheese has received national acclaim, and for good reason. Drew shares its secret: “It is a 100-percent reduction, heavy cream and aromatics. We cook it down for hours and then we whisk in cheddar and some spices and then we cool it. Everyone is made to order. It’s not in a steam table. And then when we reconstitute it, we add our house IPA, smoked ham hocks, peas, some salt and pepper and breadcrumbs.”

There is always an infusion of new culinary creations with daily, weekly and monthly specials like This Week’s Artisan Sando. “Our sandwiches have a crazy cult following,” he says, with favorites being the Reuben and the Pork and Apples.

“I never saw that coming,” Drew says. “We put it on the menu to ease up the amount of pizzas we were selling at busy peaks because we can only cook eight pizzas at a time.

“Everything is from scratch. People spend a fortune on buying pre-made stuff. We are not buying bags of bread. We are buying flour and yeast. Bread is like five percent of the food cost for the sandwich. We do 22- to 26-percent (food cost overall).

“Now our labor costs are high because so much work goes into making the stuff,” Drew says. Five of Hops & Pie’s kitchen crew are culinary school grads. “They come here because everything is made from scratch,” Drew says.

With the intricacies of working with a rotating beverage and food program, Hops & Pie’s 30 to 35 employees keep standards high. The culture is based around empowerment and family.

“It’s fun to empower people and see how they progress,” Leah says. When issues arise at a table, the Watsons lean on their well-trained staff to handle situations on the spot.

Hops & Pie’s employees are at the core of the business for the Watsons. “They matter to us,” Drew says. “They’re family to us. We care about them.” The couple coordinates staff trips, including a recent visit to a Boulder brewery to brew a beer. There are also barbecues, paintballing, pedicures and blowout holiday parties.

“We close for all holidays,” Leah says. “It’s important for staff to be with families.” Drew adds, “We’ve always offered health insurance, which was really hard for us in the beginning but it’s important. And we never complain about overtime.”
With the tight-knit group, hiring becomes even more critical for the Watsons. There’s a 90-day trial period.

Celebrating their fourth anniversary, Hops & Pie has hit an even flow. Expanding into neighboring space after their first year and gaining an additional 40 seats to nearly 80 seats total, the restaurant continues to pack the house. Waits on weekdays can be up to 45 minutes and up to two hours on the weekends.

“We are constantly adjusting behind the scenes,” Drew says, adding that they are always looking for opportunities, possibly another neighborhood spot to help promote top-performing employees.

Recently the Watsons put the breaks on plans to open a brewery operation. “The market is flooded with bad beer,” Drew says. “We kind of want to wait until it levels out again.”