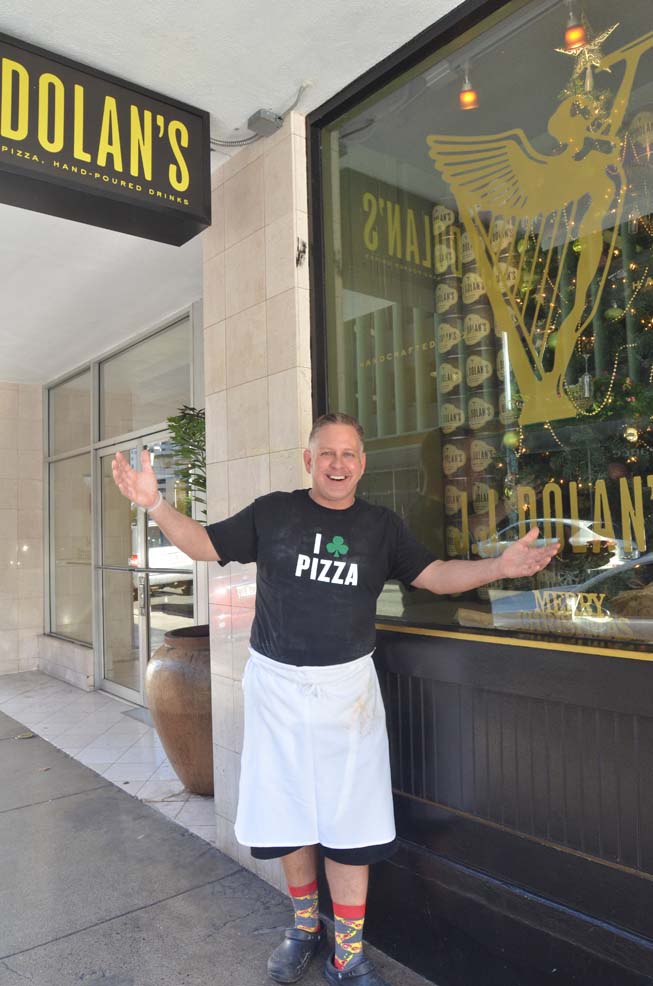 What do you get when you combine a New York-style pizzeria with an Irish pub in Chinatown in the Hawaiian tropic city of Honolulu? The answer is J.J. Dolan’s with its $2.1 million in gross annual sales. The pizzeria grabbed the last spot in Pizza Today’s 2014 Hot 100 Independents list.

Chinatown was an ideal spot for J.J. Niebuhr and Danny Dolan to open their restaurant pub. Spending more than a decade in the bar business in Chinatown, the friends knew the area inside and out. They previously worked at competing Irish pubs, where Niebuhr wowed the late night crowd with his bar pies. “We are downtown guys,” Niebuhr says. “We knew downtown and we knew our market.”

With its long history of immigrants, Chinatown has become a natural incubator for small business startups. The area borders the city’s financial district and a university, as well as its resurgence as an art and retail center.

In January 2008, Niebuhr and Dolan formulated the concept for J.J. Dolan’s. “It was a simple concept of pizza and beer in Chinatown,” he says. After securing financing from a local bank that specializes in small business, they put their business plan into motion, opening later that year.

The centerpiece of J.J. Dolan’s is the bar. Niebuhr acquired a beautiful 1940s Koa wood bar that was meticulously restored piece by piece.

All of the reclaimed objects blend together to give J.J.’s a comfortable feel of a neighborhood pub, but, “it has a definite Hawaiian feel to it,” Niebuhr says. The décor and furnishing aren’t the only factors of the relaxed vibe. Its diverse clientele of business professionals, students and a large military crowd also drive the pizzeria’s atmosphere. Its wide customer demographic also helps with a consistent traffic flow throughout the day between lunch, mid-day, dinner and late night. With nearly 100 seats, J.J.’s business is 85-percent dine-in.

“Out here there is a lot more vested interest in people helping one another because it is an island,” says Niebuhr, a former Marine stationed in Hawaii. “There is more a sense of family: ‘Ohana’, we call it here.”

Niebuhr and Dolan work closely with other businesses in the area. “There is really no sense of competition for us,” Niebuhr says. “We all try and say, ‘Hey, let’s work together.’ We do a lot of bartering and trade back and forth with people.”

Their reputations as stand up guys have helped solidify strong ties to the community, whether it’s working with the military’s medal of honor committee to throw a block party or neighborhood restaurants and bars for special events. Personal relationships are key, Niebuhr says.

Niebuhr and Dolan also place a high value on their employees. Its staff of 28 makes its customers feel welcome. “We offer a comprehensive dental, medical and profit sharing for anyone who qualifies,” Niebuhr says, as well as a 401k. “That affords us an opportunity to get a better class of working professionals. You don’t really see that too common with restaurants to be able to offer that right off the bat. We’ve done that from day one.”

J.J. Dolan’s menu strategy is simple. “We put our money into the product,” Niebuhr says. Do it better than the other guys and be consistent.”

The New York-style pizzas — which represent nearly 90 percent of food sales — are hand-stretched. The dough has a little touch of the Irish — Guinness. “There is a certain minerality content to it,” he says.

“Obviously, we can’t always do that,” he says. “Some things are proprietary.” One of those is the best-selling Spinach and Garlic Pie that features the East Coast ricotta Niebuhr grew up with in New Jersey. It is topped with mozzarella, spinach, ricotta cheese, olive oil, Parmesan and herbs. “That’s great with a nice Kona Longboard or a Stella or Guinness obviously,” he says. “The Giacomo” with sausage, pepperoni and olives is also popular.

While J.J.’s has 10 pies on its menu, three specials are rotated and advertised on its Web site and social media everyday. “I think people are more open to try different things out here.” The specials allow Niebuhr to get even more creative in the kitchen, as well as to incorporate more island-specific pizzas.

“Unique for anywhere on the mainland, we do a Kalua pork pizza with local cabbage and a local barbecue sauce (a spicy barbecue sauce made locally here, called Kilauea Fire Sauce),” he says.

Niebuhr was so thrilled to have Lieutenant Dan Band member and actor Gary Sinise visit the place, he let Sinise in the kitchen to create his own pizza. “It’s a version of our Margherita but he adds two types of sausage to it, one is a Portuguese sausage,” he says. “This is a pizza we do around Memorial Day and Veterans Day or if he’s in town. For every pizza we sell, $5 per pizza goes to the Gary Sinise Foundation, (honoring and supporting America’s defenders, veterans, first responders and their families).”

The bar program is huge, making up 45 percent of J.J.’s sales. Twelve beers are offered on draft, including the signature Irish favorite, and select wines and cocktails. Beer makes up 70 percent of alcohol sales, while wine generates 20 and liquor is 10 percent. “Four to five draft handles are rotated continuously, offering locally produced beers or craft beers. We’re trying to get as many of the seasonals in,” Niebuhr says. He adds that the eatery also offers select bottles.

“The wine program is not extensive at all, simple good wines,” he explains.

“Beer and shots with an Irish bar,” he adds, “You’re not going to get any lava flows or any of those here.”

While Dolan and Niebuhr, along with Niebuhr’s wife Leslie, handle day-to-day operations, branding and marketing is outsourced to Pittsburg-based Wall-to-Wall Studios’ Honolulu office, including J.J.’s new Web site. “That is what we knew going in: that we would put the money into and pay the people who know what they are doing and let them go for it,” Niebuhr says. The result is a polished brand as well as clever and popular “I (three leaf clover) pizza” T-shirts.

In the end, Niebuhr says, “We are two guys that reinvested into a community that has given back to us and that we’ve given to by serving it. There is no big secret here. It’s hard work. It’s delivering a great product consistently day in and day out and not compromising on that. This is a passion.” Mahalo.