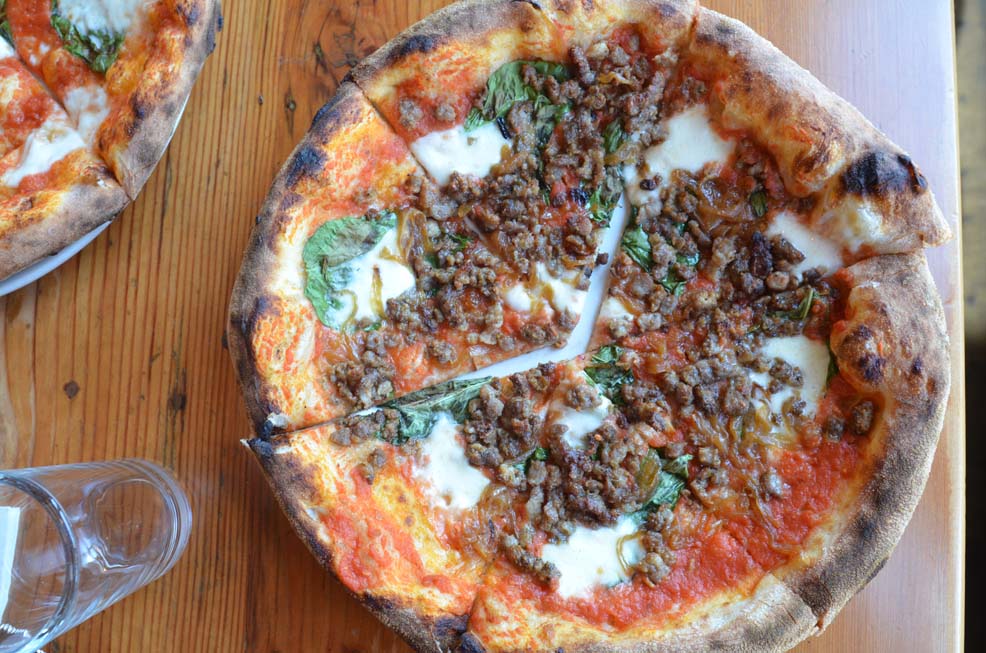 Tucked away in a suburban Portland neighborhood, Ken’s Artisan Pizza is one of those places that you go to for the press but return because the buzz is genuine and well earned. These employees are some of the hardest working people in the industry –– and that’s evident to all in the dining room who are able to see everything –– right down to desserts and toppings –– being created in the wood-fired oven.

When we visited on an early summer afternoon, the restaurant was not yet open, but not a single minute was wasted. Roasted zucchini cooled on a bun-pan rack, a prep guy mixed sauces and another stripped herbs to be featured that night. A small group of servers tasted a wine to be offered that evening and went over the night’s specials, and Chef Alan Maniscalco fielded phone calls and staff questions. Meanwhile, the health inspector popped in for a surprise inspection, and Pizza Today was there for a lengthy interview. Busy? Yes, but it’s all in a day’s work at this eight-year-old pizzeria that earns more than $1.5 million in annual sales. We set out to learn what makes Ken’s so successful in a culinary town built on creativity and local ingredients.

Ken’s Artisan Pizza began as an offshoot of Ken’s Artisan Bakery just a few blocks away. Owner and James Beard Foundation award winner Ken Forkish left a Silicon Valley tech career more than two decades ago to open an artisan bakery in Portland in 2001. He hired Alan Maniscalco as a chef “and we started doing pizzas out of the bread oven on Monday nights,” Maniscalco says. “We called it ‘Monday Night Pizza’ and it is still going on at the bakery. It went over so well that we decided to open this place together.

“The main difference is the oven, because (the pizzas) are being baked in a bread oven over there, so they take five or six minutes. Here, in the wood oven, they take about two minutes, so the result is going to be different.”

The pizzeria is open seven days a week for dinner only. “One, it was just easier to get going on that, and two, we did a small build-out,” Maniscalco says. “The kitchen is not a big kitchen, and we utilize the oven to get done what we need to get done during the day. If we were going to be open for lunch, it would just change the whole set up of what it is we do.”

The location was a great spot, considered “close-in,” a term in Portland for being close to the river that cuts through the city and close to downtown. The restaurant is close enough to a nearby restaurant row to compete but still cater to neighborhood residents.

“A good portion of our business comes from the neighborhood,” Maniscalco says. “During the holidays and summers, we are a destination, but a lot of that is locals bringing in people with them.”

With just 60 seats and an extra 16 outside, turnover is critical. Much of that success comes from the oven, which is used to push out every single menu item that must be heated. The 800 F oven can bake four to six 12-inch pizzas at a time in two minutes –– upwards of 60 an hour. Pizza accounts for 40 to 50 percent of sales on an average night.

“It’s not straight Neapolitan,” Maniscalco says. “We don’t use the 00 flour. Sometimes Neapolitans are a little more cake-like. I’m looking for a very tender crumb. In the rim, there should be exposed pockets of air the way it is with bread. Sometimes Neapolitan –– there’s not a lot of that. … At the same time it should be very tender on the tongue. We like to have the bottom to have some rigidity to it from the baking, thin middles and a nice rim.”

Beer and wine are available, comprising about 25 percent of sales. “Wine sales certainly make the difference between a good night and a great night, but food certainly pays the bills,” Maniscalco says.

Dough and sauce are made in-house, and even the sausage is ground and desserts are made at the store. While kitchen employees have different skill levels, “we’ve been doing it long enough that we can train just about anybody who is capable of figuring it out as long as they want to be here,” Maniscalco says. “I think that’s the biggest challenge in a pizza-only restaurant. Line cooks get bored making pizza. You have to find people who actually enjoy making pizza.”

Ken’s typically employs around 20 people, and most of the kitchen staff is cross-trained on at least two of the three stations.

With so much being done in-house and only one service a day, keeping a handle on food and labor costs is imperative and a task to which Maniscalco pays close attention. “I check every invoice that comes in,” he says. “Some items are going to cost a little more, and some are going to help us make a better margin. Ken and I review numbers if not monthly, (then) quarterly. When major changes start to happen, then we’ll look at price increases or whatever we need to do.”

Competition is fierce on Portland’s dining scene, “but we just roll with it,” Maniscalco says. “All we can do is control our product. We have a very good reputation. Obviously, people are going to have their personal preferences and some people are going to like us more than others, but my job is to put out the best product I can put out and help make the dining experience as good as possible. That’s what we try to focus on.”

Operating in a “foodie” town is challenging, and Maniscalco admits there’s sometimes pressure to keep up not only in the pizza industry but against other restaurant concepts that seem to be opening on a weekly basis in Portland. “Press comes and press goes, but with the importance of Yelp and blogs, what we’ve seen in this town since we’ve been here is a decline in print media. Print media used to be the end-all,” Maniscalco says.

With consumers’ ability to post reviews seemingly on the spot, staying on top of their game is more important than ever for restaurants. Ken’s recently made an Eater PDX list for the top 30 restaurants in the city, “and that’s the kind of (press) that we’ve learned to evolve with,” Maniscalco says.

The company has been approached to franchise, but owner Forkish doesn’t have any immediate plans to open a second pizzeria. “We wouldn’t be the concept that you would want to franchise anyway,” Maniscalco says, “just because we’re called ‘Ken’s Artisan Pizza.’ But people always want consultation and people always want one in their town. This isn’t a difficult business to come up with … and there’s a million and a half different templates out there for this. It’s just a matter of having the talent (and) having the skills, and having the commitment to it and if most people fail, they fail on the commitment
to it.”