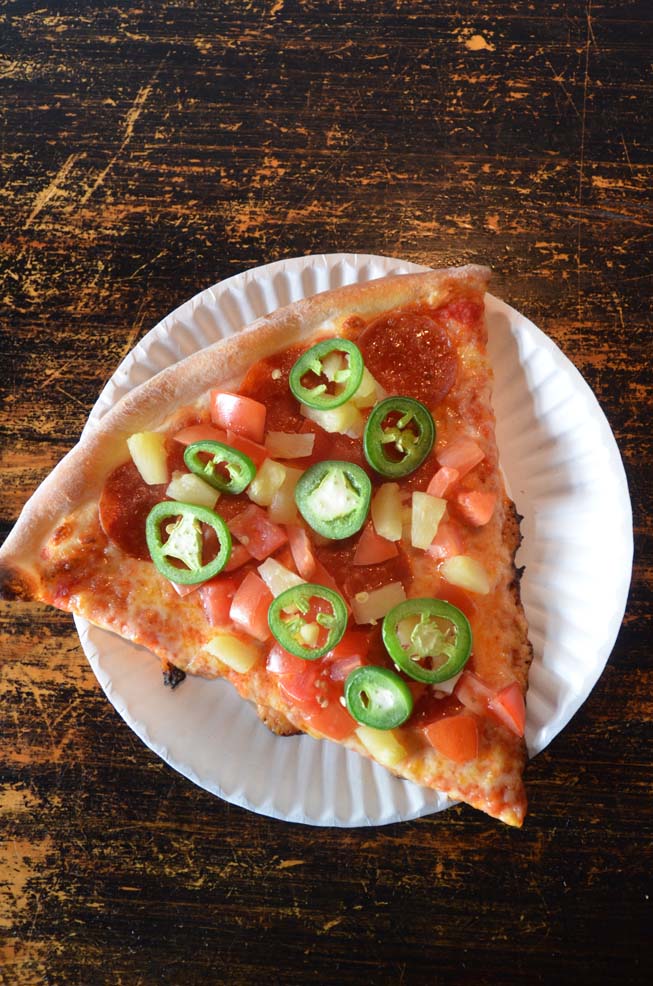 When we landed at LAX we were famished. Thankfully one of our planned stops, Garage Pizza, wasn’t all that far from our hotel. We high-tailed it to this slice dive where hand-tossed, traditional pizza delivery trumps décor and ambiance.

Garage Pizza isn’t much to look at — its interior is as unassuming as the exterior — but it serves its purpose in that it provides oversized slices to the ravenously hungry late-night crowd. The delivery drivers were amongst the nicest we’ve ever met.

Another no-frills establishment, Tomato Pie’s spartan design quickly evokes memories of many Trenton, New Jersey, pizza holes. And that’s far from the only thing about Tomato Pie that is decidely  “East Coast.”

For a moment we forgot we were in Los Angeles. The New York-style slices and the rectangular-cut Grandma slices were divinely simplistic, yet flavorful. In fact, the tomato-laden cut you see immediately to the right is one of the more memorable Grandma pies we’ve ever had the pleasure of tasting, and that’s saying something.

Just like the pizzerias back east that inspired Tomato Pie Pizza Joint, there’s one focus and one focus only here — a stripped-down version of a classic. No need to mess with a good thing.

Thanks to the high-profile culinary stars behind the concept, Pizzeria Mozza garners a lot of national press and finds itself on an assortment of “Best of” lists. That’s all fine and dandy, but we didn’t run into Nancy Silverton or Mario Batali. Instead, we cozied up to and talked with some exceptionally hardworking pizza makers who took visible pride in working the wood-burning oven.

With speed and an expert hand, these staffers cranked out a variety of pizzas and antipasti. The place was packed the entire time we were there, but there were no lags in service times. Clearly Pizzeria Mozza is a machine with well-mapped-out systems and procedures. And though the customer base presumably fills the eatery’s seats to consume pizza, we were most in love with the meatballs pictured to the left.

We were surprised to see famed pizza maker Chris Bianco mentioned on the menu. His hand lends a nice touch to some of the pizzas.

With multiple locations throughout Los Angeles, this home-grown chain is attempting to make waves through franchising. The company fills a niche that’s entirely different from Pizzeria Mozza, but there’s a place for it nonetheless. Pizza for the masses may not always be hip, yet it never goes out of style, either, does it?

A stark contrast to Garage Pizza and Tomato Pie Pizza Joint, in Stella Barra Pizzeria’s Hollywood location we found a cozy atmosphere that entices the customer to linger. A well-thought-out use of the restaurant’s ample space means Stella Barra can adequately serve all dayparts.

An attractive espresso and pastry bar greets you near the front door, followed by a large centerpiece bar area and seating that offers glimpses into the partially open kitchen. Everything from the fixtures to the windowsill herbs make diners feel at home. The company also has locations in nearby Santa Monica as well as Chicago. With its attention to detail, emphasis on food quality and the timeless, inviting ambiance, we can see Stella Barra branching out and doing well in other affluent urban areas as well should scalable growth become an integral part of the company plan.

A name like Mother Dough tells you to set your expectations high. And this industrial, Neapolitan pizzeria doesn’t disappoint.

We think so highly of Pitfire and the way its owners do business that we named it our “Independent Pizzeria of the Year” in 2013. And since that time Pitfire Artisan Pizza has continued to do nothing but impress us with its culture and its dedication to fresh, local ingredients.

This isn’t Neapolitan pizza — it’s high-craft artisan pizza done in a wood-burning oven with seasonal ingredients. The menu changes frequently based on what’s available, ensuring customers never get bored regardless of how frequently they visit. We’ve always felt the pizza world is just a little bit better off thanks to Pitfire and others of its kind.

The restaurant industry stood at attention when Buffalo Wild Wings made an investment in PizzaRev. The company’s rapid ascension isn’t unique, however. PizzaRev, quite simply, is one of several similar pizza chains fighting to take the lead role in the hot “fast casual” pizza niche.

The individual-sized pizzas here are fired to crispy goodness in about three minutes and all the toppings are one price. With production set in the same vein as Subway or Chipotle, PizzaRev and its fresh-faced competitors are set up to move customers in and out quickly. Table turnovers are the name of the game, but that doesn’t mean fast-food-rate ingredients are the status quo.

What sets PizzaRev and its fast casual mates apart is a dedication to matching its speed with quality toppings, sauces and cheeses.

Owned by a Bronx native, Mulberry Street Pizza has served New York-inspired pies in southern California for more than two decades now. The thin-crusted beauties here are just what you would expect — they yield foldable slices with a thick and crispy-yet-chewy crust at the end. And they are complemented by a variety of salads, meatballs, wings and spaghetti. It’s old-school and as relevant as ever.