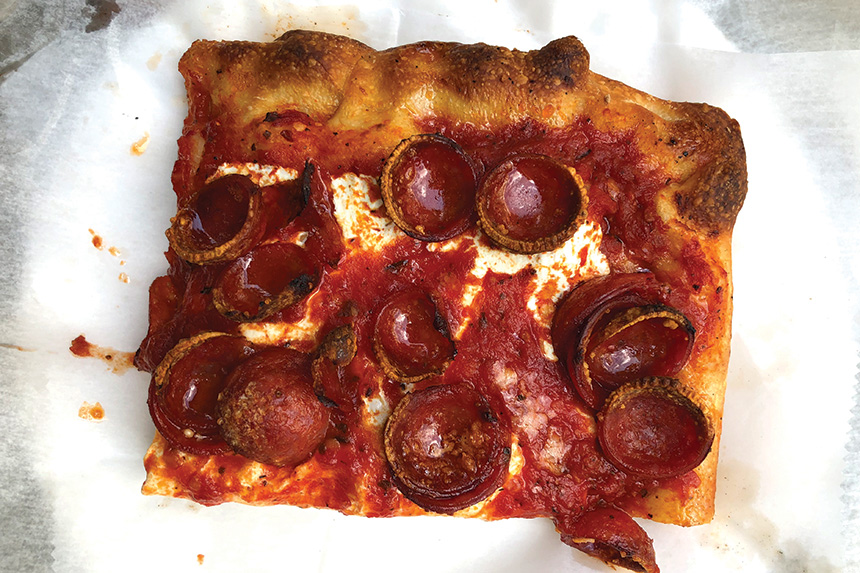 Two days and two boroughs in search of pizza bliss

In late July, Creative Director Josh Keown, Art Director Katie Veech and myself took flight to the Big Apple to hook up with Man on the Street columnist Scott Wiener in an effort to nosh on some of New York City’s primo pizzerias. Look, it’s a sprawling metropolis with five boroughs and more great pizza than one can imagine. There’s no way we were going to have the time or stomach space to hit all the legendary places or even attempt to hit a portion of the pizzerias you’ll find on various “Best of” lists.

No, instead, we simply wanted to complete this minor mission: hit up a variety of pizza offerings, ranging from old-school NY slices to Neapolitan to Detroit. You know, we wanted to run the gamut a bit. What better city to visit for that?

Katie is new to the pizza scene. She stepped into the Art Director role at the magazine midsummer, and she hasn’t even been to Pizza & Pasta Northeast in Atlantic City or International Pizza Expo in Vegas yet. She’s a foodie, but hasn’t been to New York since she was a kid and we needed to begin giving her a proper pizza education.

In all, we visited 10 pizzerias and had conversations with Scott, legendary pizza maker Anthony Mangieri and a wide array of other pizza personalities. We weren’t there to grade or judge the pies, but rather to learn, re-motivate ourselves as well as capture a glance of what’s hot on the nation’s most important scene now so that our readers can re-discover their passion for pizza and offer their customers a new perspective this fall and winter with limited-time offerings and menu experimentation.

Day one began at Stilettos Slice Lounge in the Lower East Side. Stilletos is part of the Speedy Romeo family. Speedy Romeo burst onto the NYC pizza scene with much fanfare. Chef/owner Justin Bazdarich moved from the midwest to NYC in 2001 to attend the French Culinary Institute. After stints at a handful of restaurants he turned his eyes to pizza.

Bazdarich spoke to attendees at last year’s Pizza & Pasta Northeast, where he impressed the crowd with his enthusiasm for the traditions and ingredients that make pizza so special. That same love was on display at Stilettos, where we sampled “The Truffle Shuffle,” a slice featuring cupped soppressata, Provel cheese, cupped pepperoni and a ranch/truffle oil drizzle.

The Takeaway: Truffle oil continues to be a trendy pizza finisher. Also, for all those people who turn their noses up at ranch on pizza … Stilletos proves them wrong.

Our next stop was Prince Street Pizza. There was a small line waiting to get into the tiny storefront when we arrived, but we knew by the looks of the slices and squares that we saw walking out that we were in for a treat.

While the litany of celebrities who have enjoyed the fare from Frank Morano is long — their photos line the walls — we were all about getting our hands on a square slice. And, boy, was it a thing of beauty. Light and airy and topped with an unexpectedly sweet tomato sauce, a hint of garlic and cup-and-char pepperoni, it was easy to see why Prince Street is so admired.

The Takeaway: Cup-and-char pepperoni is where it’s at. They crisp up nicely, retain some oil and are so full of flavor.

As far as pizza names go, Anthony Mangieri is undoubtedly one of the biggest. We were filled with anticipation and excitement as we met up with Scott Wiener right as his day of giving pizza tours was winding down. He was scheduled to meet up with us at Una Pizza Napoletana, so it was like hitting the lottery twice: getting to hang out with our buddy AND chilling with Mangieri at the same time.

We ordered a tomato pie (simply called “Marinara” on the menu) as we really wanted to embrace simplicity and the roots of Neapolitan pizza. The dough was so light, soft and pillow-y. Mangieri is clearly a master of the craft. We also sampled the “Ilaria,” another simple pizza that was topped with smoked mozzarella, fresh cherry tomatoes and arugula. It, too, was divine.

The Takeaway: Smoked cheeses can really change the character of a pizza. The mozzarella had just the right amount of smoke flavor. Put it with the arugula and the taste was brilliant. Try putting your pizza up in smoke for a nice twist!

From old world to old school NY, our next stop was Scarr’s Pizza. When you think of the oversized cheesy slice that surely would have been a favorite of the Teenage Mutant Ninja Turtles, you just might be thinking of Scarr’s. This is no-frills retro NY pizza. Fold it and tear into it and let the cheese, tomato and crust do the talking. You get the crunchy and pliable exterior with the airy interior and the cheese shines. What more can you ask for?

The Takeaway: The NY cheese slice is revered for its timelessness. No matter what your menu consists of, you’ll always have a loyal fan base if you can get this right.

We finished our first day at Lucali in Brooklyn. We were seated at the same table often reserved for soccer star David Beckham and celebs Jay-Z and Beyoncé because, hey, we’re Pizza Today! We had a calzone for giggles, but we were really there for the pizza. At Scott’s request we ordered a pie topped with pepperoni, basil and shallots and consumed it in the restaurant’s back courtyard as the sun went down on the quiet evening. We could not have asked for a better ending to day one.

The Takeaway: Yes, yes, you have onions on hand already. We get it. But the shallots brought a whole new dimension to the pizza. You need to give them a try in your shop. Trust us, they made the pizza that much different than simply using a yellow or red onion.

When Frank Pinello gave a keynote address at Pizza & Pasta Northeast 2018, I knew I had to check out his pizzeria in person. It took us nearly two years to get there, but we started our second day at his spot in Williamsburg. Best Pizza may be a gutsy name, but you’ve gotta love the New York swagger. We went with a few slices here — a white pie, a cheese slice and a grandma.

The Takeaway: White pies are so simple, yet delicious, and offer a break from the norm. There is no reason not to have a few on your menu.

We were eager to get to our next stop in Brooklyn, L’Industrie. And it did not disappoint. Owner Massimo Laveglia greeted us with a warm Italian welcome and chatted with us about some of the other stops we’d made on the tour. He made a soda order, took some inventory and never let the conversation drop as our slices were being prepared. We went with a burrata slice and a pie finished with hot honey. The creaminess of the burrata really stood out and made this one of the more memorable slices we consumed on the trip.

The Takeaway: Burrata is a luxurious cheese that can take an already great slice to an out-of-this-world level. Get it on your menu.

Paulie Gee’s slice shop came next, and what a blast from the past! Wood paneling, a retro-television and an Atari system with popular 80s games draw attention and fit right in with the large, cheesy slices that are an old-school NY signature. There is nothing more old school than a classic pepperoni slice. We also had the “Freddy Prince” here — an upside-down Sicilian square slice with a sesame seed bottom. The seeds gave the slice a unique taste and texture, but the tomato was the star of this show.

The Takeaway: Upside-down pizzas — a Sicilian pan pizza where the sauce is on top — are gaining traction. They offer a nice visual contrast to what your customers are accustomed to. If you don’t menu a Sicilian, sauce on top or not … get on it. Customers love them.

Our final stop was at the legendary John’s of Bleecker Street in Manhattan. This is an iconic, no frills whole pie where the ingredients do the talking. We went for a cheese pizza and embraced its hot, gooey goodness as soon as the server sat it before us. With just the right amount of char in the perfectly hydrated crust and a combination of vibrant tomato and creamy mozz, there’s a reason we saved this spot for last. It was a fitting end to a great two days of consuming the planet’s greatest food.

The Takeaway: Let your ingredients do the talking. If you only work with quality ingredients in your pizzeria, your food will shine regardless of how simple you keep things.