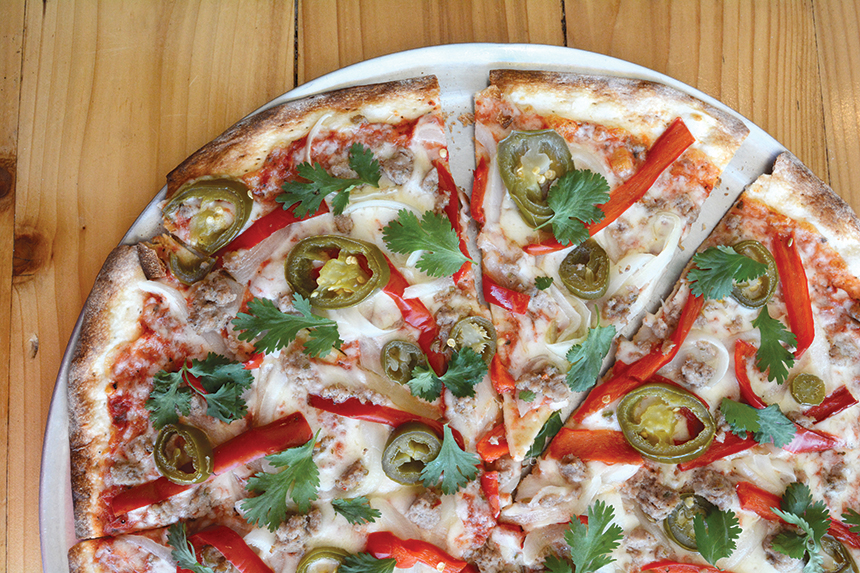 Pizza . Today on the Road: East Side Pies, Austin, TX

Pizza . Today on the Road: East Side Pies, Austin, TX

Pizza Today’s visit to East Side Pies in Austin, Texas, in the spring, came at a pivotal time in the pizza company’s history. Co-owner Noah Polk was away overseeing the grand opening of an airport location at Austin-Bergstrom International Airport.

Co-founder Michael Freid joined Pizza Today at its farthest outpost northwest of the city center with their newest additions to the ownership team, JW Cox and Colin Hawthorne. We sat down with Freid and Cox to hear the pizzeria’s story. Later, we caught up with Polk to hear his story of co-founding the pizzeria in 2006.

Today, East Side Pies operates five locations, including the airport unit. Last year, the pizzeria was No. 65 on Pizza Today’s Hot 100 Independent Pizzerias list, reporting $3.45 million with its three units and set to rise even higher in 2019.

The concept was envisioned at a coffee shop over conversations between Freid and Polk on a shared desire to bring food options to the emerging east side of downtown Austin. Freid had the culinary background, graduating from Culinary Institute of America in New York with extensive experience working in bakeries. Polk had vast restaurant and bar experience but his favorites were the pizzerias he delivered for growing up in Dallas.

Neither Freid or Polk wanted to go solo in a restaurant venture. Their partnership became a natural fit. “Michael and I being who we are, I knew that it was going to be a funky little joint,” Polk says. Freid stumbled upon an old counter-service fish fry restaurant available. They found a good deal on used pizza-making equipment, had a friend help build out the space and opened the takeout and delivery pizza spot with walk-up slices within seven months.

“The reason we did such a small place between the two of us,” Freid says. “What could happen if we fail? It just goes away, we’re not out a lot.”

Freid knew what kind of pizza they would serve: his variation on Chicago thin, something that was not found in Austin. “I’m from Chicago and in Chicago and the Midwest we know pizza is cut into squares and pretty thin,” Freid says.

Polk boasts on Freid’s pizza dough during a later phone call. “The thing that separates our crust besides how thin and crispy it is, it comes from Michael’s starter dough that he took to every bakery he ever worked at,” Polk says. “It’s over 30 years old now. When we started, that starter was right at 17 years old.”

From its first menu, East Side pies has been known for eclectic pies with creative topping combinations and sauces. At one point, the pizzeria was up to 51 pizzas with 11 sauce options. Today’s menu features 44 pies and six sauces, including a red, chimichurri, ricotta, black bean, rosemary-infused extra virgin olive oil and pesto.

Not only was the pizza innovative for the area, Freid initiated a farm-to-table focus and recycling program, that while commonplace now, was cutting-edge in the mid-2000s.

Since the beginning, Freid has sourced as much as the business can locally, reaching and building relationships with farms. East Side Pies has built a reputation on its product transparency with a focus on local produce.

East Side Pies features a farm-to-table pizza weekly and monthly. During Pizza Today’s visit, Cox shared the featured slice with white sweet potatoes, savoy cabbage, fermented jalapeño and golden beets. He even found a unique way to use the beet greens. “I wound up cooking them down like a cream of spinach and using our ricotta for these dollops,” he says.

With the additional locations and availability of the local product, they re-evaluated their selection process. “We’ve definitely refined it quite a bit,” Cox says. “It sort of started with we’ll basically get whatever we can and just get it on some pizza. So it was constantly changing which was cool because there was a huge amount of variety but we wouldn’t have even the same pizza the same day. There are a lot of reasons to want to give it a little bit greater focus. One is delivering on consistency so somebody can hear that we’re featuring a certain type of produce that is available locally. They can see it on Instagram or they can see someone else’s post about it. They can go the next day and try that. Trying to deliver a product with some reliability.”

From its inception, delivery has been a keystone of the business. Today, it makes up 65 to 70 percent of sales. Freid says, they do not partner with any third-party delivery services. It’s all done in house through their delivery program where they can control the accuracy and quality.

Austinites have gravitated towards the originality of East Side Pies pizza menu, giving Freid and Polk the wherewithal to bring on a general manager and shift manager. That step made it possible to plan a second location. The partners opened a takeout and delivery spot with walk-up slices on Airport Blvd. in 2010.

The Airport Blvd’s 3,000 square feet made it ideal to also serve as a commissary. Today, the commissary services all East Side Pies locations. A third East Side Pies opened on Anderson in 2012.

It was when Freid and Polk opened their fourth location in 2018, they decided to bring in new partners from inside the business. Cox and Hawthorne had worked for the pizzeria nearly since the beginning and are co-directors of operations. “They both went from regular pizza guys and worked their way up,” Polk says. “They are both amazing. Opening this fourth shop, we really wanted to (no pun intended) give them a piece of the pie.”

The flagship East Side Pies has gone through a renovation that is close to completion. “The new kitchen will be pickups and slices with seating inside, seating outside and seating on the side,” Freid says.

With all of the growth and updates, Polk says he’s unsure when they will add another location. “With four and a half shops, we just want everything up and humming and be happy with what we got before we even think about anything else again.”