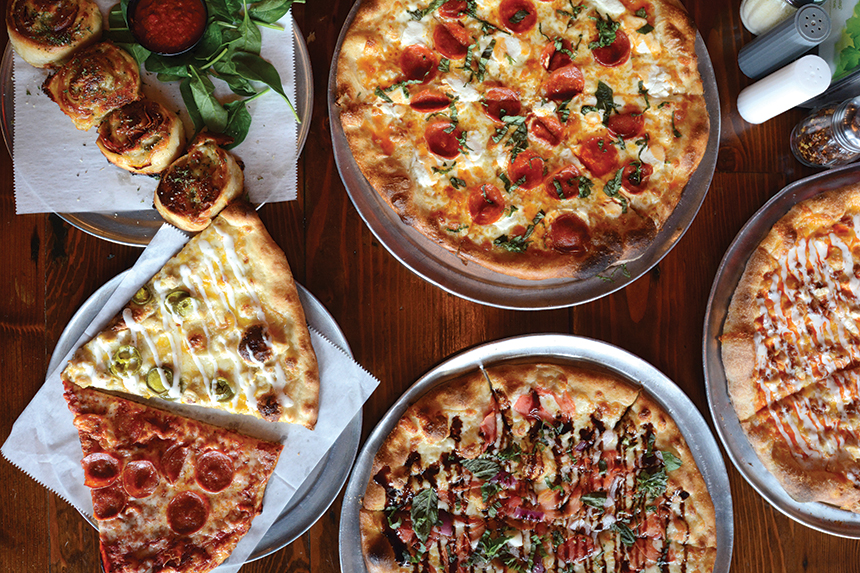 Fine Folk Pizza is all about the people.

When Michael and Brie DeNunzio started the business, they wanted to be “that” pizzeria — the kind of place that thrives on people-centered principles for its team, customers and community. They delivered on their ideals in the most fulfilling way.

Fine Folk Pizza is coming off another high, getting back-to-back wins at the 2019 Caputo Cup in Atlantic City, New Jersey. Pizza Today stopped by the pizzeria in Fort Myers, Florida, last fall to see what’s behind the championship pizza. What we discovered was a business that was willed into existence and is hitting its stride.

We met up with owners Michael and Brie, who showed us around the shop. “As soon as you walk in, you’ll look up and notice we have this giant custom pizza paddle chandelier. It has old school Hobart whisks as the light covers,” Michael says. “My mother-in-law actually put that together. As we go though, you will see that a lot of the décor in here is actually stuff that we’ve done ourselves. There were a lot of people who came together to make that happen.”

Craft décor including the Fine Folk sting art, wine cork pizza slice and pizza utensils wall art give it a fun vibe. The beautifully intricate mural on the back wall pulls visitors from concrete floors and a dominating red wall. Even the restroom is full of surprise décor.

“We want to have an opportunity to wow a person on so many levels,” Michael says, even in the restrooms. “When people break away and they come back to the table, it’s something to talk about. It’s just a big standout.”

Fine Folk’s footprint is a tight 900 square feet, with seating for 25. Storing pizza boxes and flour in the front of house adds to the pizzeria’s cred.

Michael and Brie continue to share what went into the space. “We came in and we had a budget and we went way over,” Michael says. “So, what happened was we had a lot of friends and family come through and help us out with the promise of free pizza for life and trades.”

Fine Folk Pizza’s abridged origin story goes back to a 12-year old Michael, when he began reading Pizza Today at his uncle’s pizzeria. Michael has worked in pizzerias since he was 15. He opened a seasonal restaurant, DeNunzio’s, with his parents in Seas Isle City, New Jersey. One off-season winter, Michael moved to Fort Myers. “I fell in love with the area,” he says. “I fell in love with the girl. And we decided to eventually open up a shop here.”

Chris Batties, general manager, has been with Fine Folk the whole way. Michael urged him to move to Florida and help open and run the pizzeria.

With days until its soft open, Michael and Batties were having such issues with the adapted dough formula from New Jersey that they delayed Fine Folk’s opening, while the two tweaked several dozen batches until they came up a crust they were proud of. “We really go for a chewier style of pizza,” Michael says.  “There’s a little crisp to it but it’s not as crispy as your New York-style pizza but that is very intentional.”

Fine Folk Pizza opened in the fall of 2015, serving up whole pies and slices for dine-in, carryout and delivery, which have an even split of sales. The shop has become famous for its specialty pies, like the Yo Paulie, a white pizza with a roasted garlic olive oil base, pepperoni, fresh basil, a hot honey drizzle, shredded mozzarella and ricotta.

Game Time, a Buffalo chicken pizza with bacon and ranch, is most popular pizza with the MLB’s Boston Red Socks Fenway South Park spring training stadium next door. The swirl rolls, pepperoni pinwheel appetizers, are also a hit and often sell out.

From its opening, Fine Folk positioned itself as the community pizzeria. Inside of the pizzeria, pizza makers show off their dough-tossing skills at the table to the delight of families and even get kids in on the action. The pizzeria’s dough tossing has appeared on America’s Funniest Home Videos twice.

“We do a ton of work with charities,” Brie says. “One of the biggest reasons we named it Fine Folk Pizza is because we wanted to be that pizza shop in the community and be that pizza shop that you call for Brownies, Girl Scouts, Boys and Girls Club…”

They’ve held school dough tossing lessons for math classes, career days, and bring kids with special needs into the shop for private pizza-making parties. “We do it because it makes our hearts happy,” Michael says. “We do it because we believe that it is our job to pay forward all of the amazing love and support Fine Folk is blessed with.”

Another aspect of community is what Michael calls, “taking Fine Folk’s fans along for the ride.” The pizza shop’s social media posts are more than daily specials. The small crew bring them inside the operation and take them to events like the Caputo Cup and Pizza Expo.

Year two is when everything began to fall into place. Michael and Brie studied the business, went to Pizza Expo and built a community of pizzeria owners. The two switched to a banking system that they had read about in “Profit First” by Michael Michalowicz. “It changed the business for us from us working for $2 or even pennies an hour to us making a living wage and being able to pay ourselves, pay our team, knowing that I’m going to have rent,” Brie says.

Michael adds: “We paid off $67,000 of debt in a year and during that time we were still able to pay ourselves a good amount.”

Michael, Brie and Batties have built a strong core team, which can be as many as 22 during peak season in spring. “We’re in a place where we have a great management team and our entry-level employee training is gone really well,” Michael says. “A lot of people really care what’s going on in here.”

Fine Folk’s employee stability is a testament to the philosophies and principles that were set at the very beginning. The staff are reminded of those values every day on a board above the makeline. They center on fun; growth; cleanliness and quality; responsibility, communication and integrity; and health.

Hiring has been critical. “We try to hire really nice people, genuinely nice people,” Michael says. “Our interview process is very vigorous and very selective. We have set interview hours once per week right now — making it easy to apply and making it very apparent that we are always hiring the right people is something that we do. We really look for hungry, humble and smart.”

With a trusted team, Michael and Brie have been able to step out of the day-to-day operations and work on growing their business. Fine Folk’s core team were hungry for opportunity and that drove Michael and Brie to create those opportunities by firing themselves from jobs at the pizzerias.

“When we fire ourselves from a job to give it to someone else, we find another job to do,” Brie says. “So when I stopped taking deliveries and Michael stopped working in the pizzeria, ‘ok, this is eight hours that we never had before.’ So, we are able to branch out really well by firing ourselves from certain positions and creating new positions. We are always working but it’s different.”

One of those projects has been the catering aspect of the business, including launching the Folkswagon, a food truck that specializes in 30-second ticket times to separate it from other mobile unit competitors.

Michael has also taken his positivity and business experience to start a restaurant coaching business.

Today, Fine Folk Pizza has become that pizzeria Michael and Brie envisioned. They plan to stay forward-focused and continue to deepen its connection with its community.