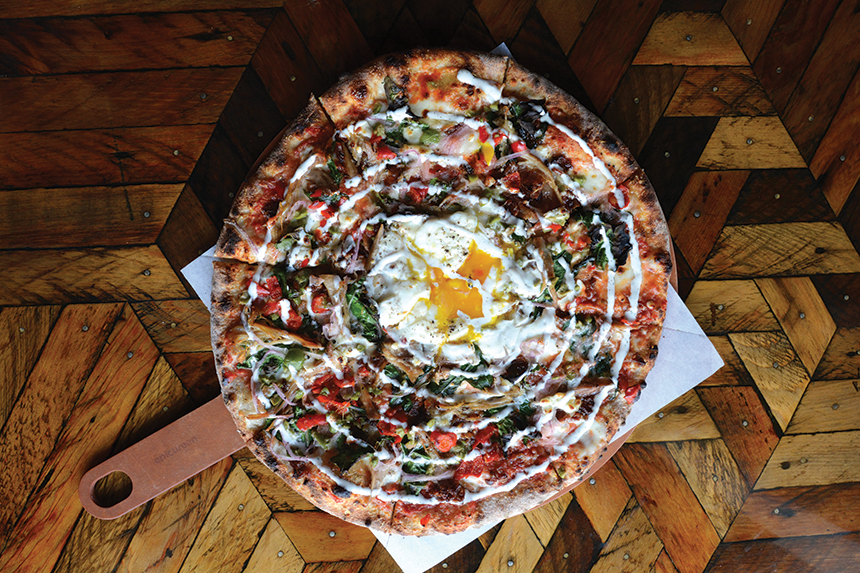 Nick Gore had a vision when he opened GoreMade Pizza in Columbus, Ohio. “My first job was pizza. My Second job was pizza. Then I got a job at a restaurant and trained under Alana Shock, Chef Shock… I got to see what real food was and took what real food was and my previous history in pizza and this newfound passion for using resources responsibly and all those things came together to having a wood-fired pizza place. I think wood-fired specifically because it’s a very articulate food.”

Gravitating towards a Neapolitan style, Gore says, “It’s so specific and it’s such a fine line. Everything has to be right. The balance of the heat, the dough, all of it has to be spot on. It’s hard to get right consistently.”

Instead of jumping into a brick-and-mortar restaurant, he started small. “We were a catering company,” Gore says adding that they focused mainly on events like birthday parties and graduations. “We weren’t a street food vendor. We started out in conjunction with those things and doing the farmers markets to build a relationship with the farmers and a relationship with people that care about where their food comes from and go from there.”

Gore found a cozy little spot in the revitalizing Italian Village and spent a year and a half building his pizzeria. GoreMade Pizza opened in September 2016.

The space is built for connectivity with an open kitchen. Every table has a view of the imported Italian dome oven. “I didn’t want to be in some hole making food and not be able to connect with the people that are consuming the food.” There’s a whimsical patio in the back with a funky art car.

During Pizza Today’s visit this summer, just as many owners do from time to time, Gore was filling for a server. While chatting with Gore at the bar, he eyes were always fixed on the customers beginning to flow in. He excuses himself and sits down next to patrons on a long banquet that stretches the length of the restaurant, having genuine conversation about the food. It’s clear to see that interior was designed for these cozy interactions.

Gore returns to share more of the story of his business. As he details his menu, it’s evident he’s encapsulating something special and unique. “Our menu is really small, and we only have six toppings that we use year-round and everything else changes.” Every pizza comes with fresh mozzarella. Its regular toppings list includes pepperoni, sausage, bacon, roasted mushroom, red onion and feta.

At the back of the restaurant is a black dry-erase board with a list of seasonal toppings and salads, including ingredients like white cheddar, olives, piquante peppers, dippy egg, caramelized onions and Shaorma chicken.

“Our rule is that if it grows in Ohio, we only serve it when someone here is growing it,” he says, adding that the pizzeria doesn’t serve a classic Margherita pizza. “Basil is hard to come by sometimes,” he says. “People expect a Neapolitan wood-fired pizza and we just don’t have that all of the time. Nor do I want to artificially create that to support their expectation. We expect things all the time and we miss out of the fact that they are here sometimes, and they are not here sometimes. And when they are here, it’s awesome and when it’s not, there is something else is here and that is awesome. So as soon as you let go of an ingredient, you get another ingredient. It’s important to connect to that.”

Instilling the philosophy on the pizzeria’s menu requires the team to get creative. “We have something we call ‘Super Spice.’ Basically throughout pepper season, we get cases of peppers, we’ll put half of them aside for dehydration,” Gore says. “Because we are local and seasonal, we only get spicy stuff a very small window of time, so we dehydrate the peppers and after pepper season we have this one little shaker and that’s around for about five months.”

Its most popular seasonal items debut late summer and fall. “The No. 1 thing that people want all the time is the butternut squash sauce,” he says. “It’s a pureed butternut squash base.” During the winter season, Gore says, they focus on meats, cheeses and root vegetables.

GoreMade’s menu has only four pizzas, like Annie Social featuring bacon, red onion and feta on an olive oil base. The Clintonvillain has an olive oil base with roasted mushrooms, smoked salt, truffle oil and grated cheese. The seasonal creativity comes from the Chef’s Choice with an added benefit that for every Chef’s Choice ordered $2 goes to the kitchen crew. “I could come up with a really good pizza with some local ingredients but since we buy them as they are available, sometimes we only get a little but, sometimes we get a lot.” With Chef’s Choice, pizza makers can adjust based on product that’s available on the pizza line.

The lunch special is unique. They cut dough balls in half to create a “Pizza Boat,” that’s served on a board with a local salad.

It craft cocktails are as seasonal as the pizza menu featuring house-made syrups and liquor infusions.

For Gore sourcing ingredients is at the forefront of the pizzeria, whether it’s growing produce for the pizzeria in his yard or finding farmers as passionate about the food. “There was a guy who grew our radishes, Milan, I asked him ‘how the radishes were’ and he said ‘when I pulled them out of the ground I welled up.’ I’m going to buy radishes from that guy.

“There’s the buzzword of organic or local but when you talk to Milan and he wells up when he pulls radishes and turnips out of the ground,” Gore continues, “there is a remarkable connectivity to the food system when you support those people. It’s amazing. You connect to what they’re passionate about and those kinds of people grow things that other people don’t that allows us to serve things like gooseberries and Champaign currants for our cocktail garnishes. It makes it worth doing.”

Another component of GoreMade ingredients is responsible sourcing. “How can we respect life and still serve it responsibly?” Gore questions. He seeks to find humanely-raised meats. “Is the life well supported? Are the humans that creating this environment responsible? Are they kind? Are they good people? I just want to support good things.”

“I think the people who come in here feel the same way about this space and want to support this place because it’s fun. The two things people talk about when they are in here is the pizza and the experience. I’ve built something that was honest and straight-forward and present and I think people are responding to that.”