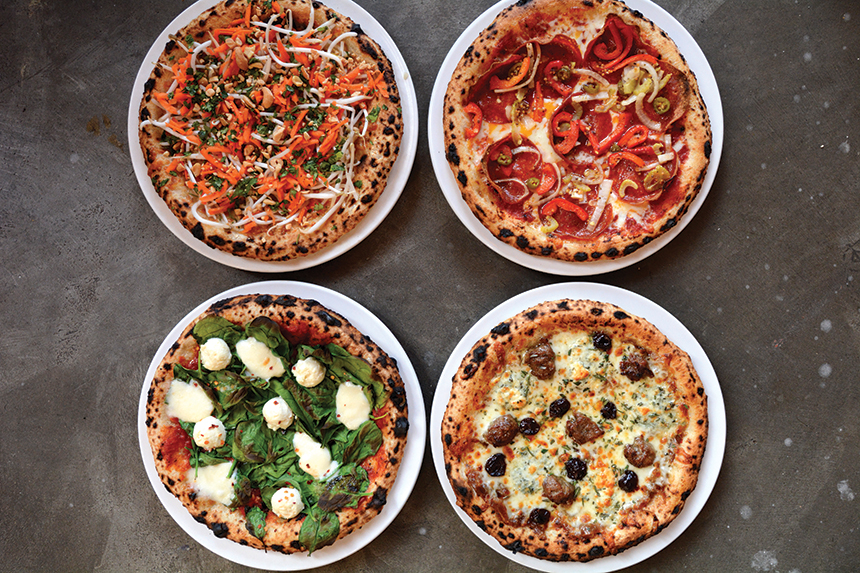 Tom Edwards is a perfectionist. No matter the task he undertakes — and his varied interests lead him to dabbling into quite a few — the common thread is an unfailing dedication to the pursuit of excellence. So ingrained is this trait that the man doesn’t just make exquisite pizzas — he also built the extremely unique structure that houses MozzaPi, his Louisville, Kentucky, pizzeria.

“I got into woodworking when I was young,” he says. “I went to a class and I really, really liked it. I was like, ‘I want to do this when I retire.’ What I noticed, though, was that it was mostly people in their 60s and their hand-eye coordination was off. They were squinting and everything. I told myself, ‘I really enjoy this. But I’m going to have to get so good at it that when I’m older I can just do it from muscle memory.”

Tom Edwards, owner of MozziPi in Louisville, KY, stands in front of his copper-encased wood-burning oven.

With that in mind, Edwards literally began working on and perfecting that craft.

“One of my philosophies is that if you want to get really good at something you have to do it over and over and over again,” he says. “And then, when you do, it starts to look different. Nuance appears. You begin to see things that you didn’t see when you first started doing it. And then, at some point during that repetitive process, artistry and craftsmanship replaces that repetition.”

And so it came to be that Edwards had the skill needed to outfit MozzaPi with stunning woodwork and unique features.

“It took us two years to build,” Edwards says. “My sister and my brother-in-law helped me out. We put a lot of time into it.”

One thing quickly evident about Edwards is that he’s willing to patiently put in the time it takes to become proficient at whatever he sets his mind to working on. He understands that good things don’t happen overnight. And that may be why he doesn’t change his menu seasonally or update it often.

“I need to do a little bit of menu updating, but what I’ve found is that people value consistency and quality over variety,” he explains. “I’m 100 percent dedicated to whatever it is that we’re doing. If I’m going to work on a new pizza, it has to be crave-worthy. And most stuff isn’t. But that’s the bar for me.”

mozzapi isn’t open for dinner. instead, the restaurant caters to a breakfast and a lunch crowd. Edwards offers coffee, muffins and pastries in the morning, along with breakfast sandwiches, before lunch service opens.

That’s right: mill grains. MozzaPi houses an Austrian flour miller that Edwards uses to mill locally grown, organic ancient grains. He then bakes focaccia and other artisan breads daily. That side of the business is known as LouisMill, and it produces not only flour, but even grits that are available for retail and that are sold in other restaurants. Edwards even hosts week-long breadbaking courses that he has named Artisan Bread Camp. During the classes, students are introduced to working with sourdough and taught to make a variety of products.

“I get people all over the world who come to it,” he says. “It’s pretty cool, because then they take the passion back to their respective communities. We get enthusiasts and home bakers, but we also get professionals.”

That word — passion — fuels Edwards in his pursuits.

“Wood was probably my biggest passion for many years,” he says. “And I guess it probably still is — I just don’t get as much time with it. But then I got into pizza.”

So how does he keep the repetitive pizza-making process from becoming rote?

“That’s a curious thing,” he answers. “I think a lot of bakers feel the same as me. It may seem weird, because you are doing the same thing every day. But we’re dealing with a lot of different variables. Temperature, humidity, ovens. The variability of it makes it to where you have to focus. You don’t just go through the motions. It’s about being a craftsperson.”

Mozzapi’s showpiece is the wood-burning oven wrapped in copper. Edwards tends it dutifully, turning out pizzas with leopard charring.

His dough is par-baked briefly in the morning before the pizzas are dressed and receive their final bake to order. This is done, Edwards says, to take some of the moisture out of his high-hydration dough formula so that the crust can stand up to the sauce and toppings. His pizza is, as he explains, a sort of hybrid that fills the middle ground between Neapolitan and Sicilian.

“The menu is pretty limited,” Edwards concedes. “We focus on doing what we do as best as we possibly can.”

Sometimes that means making a small concession here or there in order to maintain sanity.

“I just want people to have a great time,” says Edwards. “We used to not have Diet Coke when we first opened up. But people would ask for it, and they were kind of disappointed that we didn’t have it. It’s more important to me that people enjoy their experience here. So if that means we have to have Diet Coke, then I’m gonna bring that in. So I kind of got over the hang up. You can either drive yourself mad or you can adapt somewhat.”

Ultimately, says Edwards, he rests happily when he knows he has put in an honest day’s work — and will rise and repeat the next day.

“My philosophy is to try as hard as you can every day, go to bed tired and wake up excited,” he says.

Jeremy White is Editor in Chief of Pizza Today.