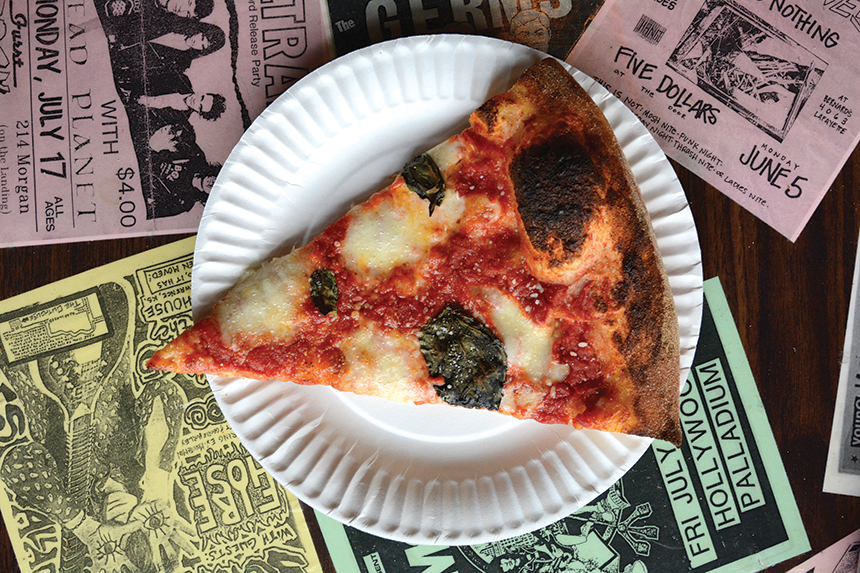 When Scott Sandler lost his job in 2014 — his second layoff in a short span — he decided to take the plunge once and for all and become his own boss. It’s been an interesting ride ever since.

“I had another career in real-estate investment,” he says. “And I was making pizza at home as a hobby, like a lot of guys do. I was pretty obsessed with it. I always wanted to open a pizza place. To make a long story short, I got laid off in 2013. I got another job, and then in 2014 there was just a crazy set of circumstances and I got laid off again. So I decided to go out on my own.”

Sandler opened a wood-fired pizzeria named Pizzeoli. The Neapolitan trend was hot at the time, and the shop quickly gained good reviews.  “It  was an all-vegetarian Neapolitan pizza place, and that kind of put me on the map here,” Sandler says. “We got a lot of press. Before I sold it we were named one of the Top 25 restaurants in St. Louis by the St. Louis Post-Dispatch restaurant critic.”

Sandler says the experience of owning his first pizzeria prepared him for Pizza Head, the vastly different business model he now operates.

“That was my first foray into pizza,” he says. “I was really interested in the Neapolitan, wood-fired thing. But I grew up in New Jersey, so I always knew I wanted to do a counter service with a slice culture. I decided after a couple of years with Pizzeoli that I didn’t want to do sit-down anymore and that I wanted to focus more on a fast-casual, counter service spot. More of a New York slice shop.”

Sandler says that first establishment “was a great start; a great stepping stone.” But ultimately, he says, “Pizza Head is everyday pizza for everyday people. Pizzeoli was on a higher level culinary wise. Not that it was better, but it was different. And the audience for it was just smaller. Financially, we were always in the black from day one. I started it with very little money. We developed our clientele, but I really wanted to start this New York slice space. It was just a different product and a different audience altogether.”

Sandler operated both shops simultaneously for about six months before selling Pizzeoli. He says the lessons he learned while operating his first pizzeria have proved invaluable to Pizza Head’s success.

“The way I set the other place up, because I was green in the industry, was that everything there revolved around me,” he says. “I think a lot of guys make that mistake. So if I wanted to go on vacation, I had to close. It was that kind of setup. I made all the pizzas. The problem was that I couldn’t spend time with the family, or I’d lose money when I went on vacation. So I set Pizza Head up where it can operate without me. Now, I’m managing. Once in a while I’ll jump in and make the pizzas, but that’s just because I want to.”

Now that he can focus on working on the business instead of in it, the dividends have been huge. “Our turnover is very low,” Sandler says. “How you staff is extremely important. It’s been eight months since my last turnover. I’ve sort of grown as an owner in the last four years as far as my management style. I’ve learned a lot about how to manage and treat employees. I’ve sort of found that balance between getting my employees to be motivated without them feeling like Big Brother is always on top of them.”

Sandler says he has grown to love entrepreneurship, “although it is nerve-wrecking all the time. You have to have the stomach for it. Literally, it’s 24/7. You can never relax. Because if you relax, you’re done. You’re place is gonna go down. You can never stop watching everything.”

Sandler, himself a vegetarian, saw an opportunity with pizza head. every item he offers is either vegan or vegetarian.

“Once I got into the business I saw how successful the counter-service places were here,” he says. “And there literally wasn’t one slice place in St. Louis. There were some New York-style pizzerias dotted around that do offer slices, but they’re not slice joints. So we’re literally the only slice joint in town. It’s crazy. And then being a vegetarian/vegan place really makes us stand out.”

Did Sandler have any reservations about not offering meat? Not really, he says.

“We’re in the Midwest, so people were sort of rolling their eyes at first,” he says. “But they didn’t know the market. I know the market. People underestimate the market because they don’t know it. This place does really well with no meat in here. One thing I’m not lacking in is confidence. I knew if I had a suitable replacement for meat that it would be okay. Some carnivores, you’re not going to win over no matter what. My thing was that there’s a vegetarian or vegan in nearly every family or every group. They’ll pull the rest of the family in. And then I’m going to give them a really high quality pizza that they’ll want again.”

At times, sourcing the plant-based pepperoni and sausage can be difficult. Sandler now relies on a supplier in Nashville, Tennessee, to ship him his vegan meat alternatives.

“Before I found a supplier I bought retail,” says. “Sourcing that was difficult. Sometimes I had to use Whole Foods. I did whatever I had to do to keep that supply chain going. There’s not a lot of options out there.”

Sandler makes a cashew cheese that he mixes in with the sauce for his vegan pies. The vegetarian slices contain mozzarella and fior-di-latte. Both sell equally well, he says.

“This whole business is built on two slices and a Stag beer for $7.95,” Sandler explains. “St. Louis is a value town. Big, innovative concepts and forward-thinking food sometimes has a hard time surviving here.”

For those reasons, Pizza Head doesn’t get too mixed up with the artisan movement that is prevalent in much of the country.

“That’s not necessary here,” he says. “We just deliver a solid, consistent product, and people here eat it up. They just want a good slice of pizza at a good price.”

When Pizza Head opened, says Sandler, his goals were modest.

For those reading this issue at international pizza expo in las vegas, be sure to check out Sandler’s presentations. He’s doing a food demonstration at the show floor demo area on Tuesday, March 5 from 10:30 a.m. to 11:30 a.m. He’ll showcase various vegan recipes and answer questions about the products he uses. Then, later that same day, he’s leading a seminar titled “Restaurant Math” from 2:30-3:30 p.m. in Room N109.

“I’m excited to share my experiences with other pizzeria owners at Pizza Expo,” he says. “That’s one of the things that’s so great about this industry — so many people are willing to give and share what they’ve learned with others.”

Jeremy White is Editor in Chief of Pizza Today.