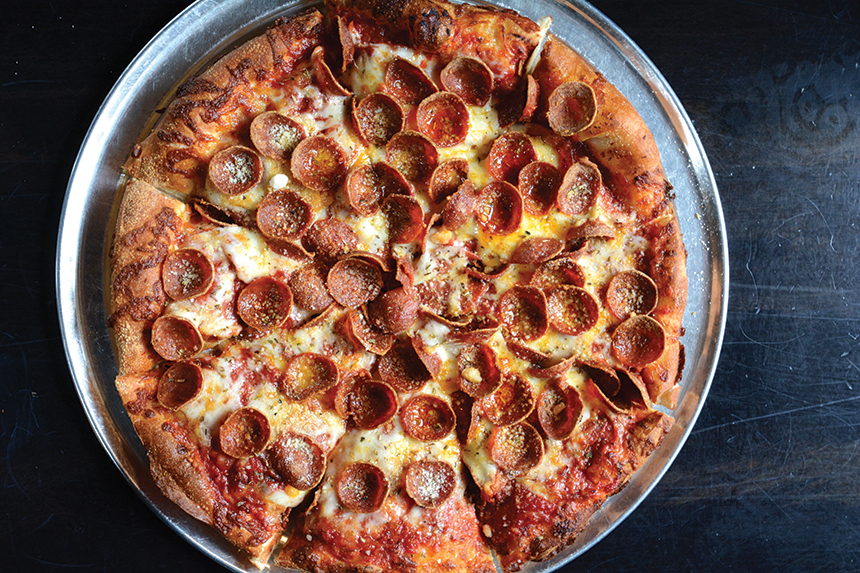 Along a winding road and a two-hour drive from Columbus, Ohio, sits Sugarcreek, a quaint village of 3,500 residents. It’s known as “The Little Switzerland of Ohio” for its Swiss heritage and architecture, Amish communities, Swiss cheese and lush farmland. Its hometown pizzeria is an embodiment of this tight-knit community. Park Street Pizza has been a staple and pride point of Sugarcreek since 2003 when a young couple took over a closing pizzeria.

Rocky and Courtney Shanower took the leap into ownership when the proprietor of a local pizzeria that Rocky had worked at and grew up in was ready to close. “We were at this pivotal point where either we go find other jobs or see if we can make a go of it ourselves,” Rocky says. They spent Park Street’s first six months in its original downtown Sugarcreek location while renovating a 1960s ice cream stand near the high school. It was an on-the-job learning experience — with some training with the previous owner Sue — and then they were off. “We’re figuring it out as we go and that was 16 years ago before Google,” he says. “Our sauce, our dough, a lot of our core things changed a lot over those first five years.”

Sugarcreek responded well to Shanowers’  efforts with lines wrapping around the corner. “We started growing and growing like crazy. In like five years, we were bursting at the seams,” Rocky says. The Shanowers purchased land directly behind the ice cream stand turned pizzeria. They built their current space in phases beginning with a kitchen and tiny dining area. In 2013, Park Street experienced its most sizable expansion with the addition of a 100-seat dining, waiting and porch areas. A 60-seat patio was added in 2017, with a vision to enclose the space as a three-quarter season patio.

Pizza Today toured the pizzeria this summer, sitting down one-on-one with the Shanowers. “It’s our second home, our first child,” Rocky say as he gave a behind-the-scenes tour of the pizzeria. There is one overwhelming element: the Park Street concept is flawlessly executed. Every component has been planned for, from walk-up counter blended with full service, large waiting area, table paging system to a spotless, well organized and efficient open kitchen. The operation is completely dialed in for its high volume and a customer base of locals, people from neighboring towns and tourists.

Its interior is a blend of modern, chic and country with oversized wooden booths, four-top tables, concrete flooring and eclectic chandeliers. The pizza line is directly behind the counter. “I really like for our staff to know that they are in the forefront of our customers eyes,” Rocky says. “It keeps them accountable but it also allows our customers to have that trust for us…It’s not behind closed doors.”

The Shanowers balance each other’s strengths as a solid leadership team. “Courtney found a real passion in cooking and developing food,” Rocky says. “I found a real passion in just the entrepreneurial side of the business. I love pizza and I love food but I’m driven more on the business and people side of things. We’ve just kind of complemented each other really well in that.”

At the heart of Park Street’s foundation is, Rocky says, “Caring about our community, caring about our team members and our guests, caring about the locality and the sourcing of our ingredients and the quality of those and then sustainability of the organization overall.”

It’s evident that the Park Street team exhibit those same qualities. “We’re living and breathing this,” Rocky says. “Our passion for what we are doing is supporting our families. We know how much we value our customers. I think by living those and being very involved with everybody, it’s kind of like a top down where the manager sets the culture and it feeds down through them. There’s no magic thing about culture. It’s really just supporting your team, valuing them, caring about them and showing them how much you value the guest experience.”

Courtney and Rocky share a passion for their local producers. The menu is filled with items grown in the area. “It’s basically the most perfect symbiotic relationship,” Courtney says. Park Street has access to a bounty of fresh products, while the pizzeria is able to encourage its customers to use local products. Park Street’s parking lot even serves as a CSA pickup spot and farmers market on Saturday afternoons throughout the harvest season.

Park Street’s menu offers a dozen signature pizzas, a half dozen salads, boneless and bone-in wings, some shareables and a couple sandwiches. Most items are made in-house. “We tried to create a menu that is very pizza-forward,” Rocky says, adding pizza makes up more than 70 percent of food sales.

The pizza is one of a kind with a light and airy crust with a crispy finish. “It’s a very unique dough,” Rocky says of Park Street’s pizza dough that is made with a sourdough starter and pan baked. “It’s actually a very low hydration. It works for our application, for our ovens and our process. You can’t classify it. It’s not a style. It’s our own thing.”

Each new season, the people of Sugarcreek look forward to Courtney’s seasonal collection that is promoted in store and on social media. Rocky and Courtney gave us a preview of its fall offerings. “We’re going to do our salty peach salad, which is one of our best seasonals. It’s crispy prosciutto, blackberries, local peaches, avocado, basil, a couple lettuces and then we do local honey balsamic dressing,” Rocky says. These are accompanied by a vegetarian stuffed pepper; avocado fries with a sriracha mayo drizzle and chip crumble; and a vegan Chicago deep dish with house-made vegan cashew cheese, Parmesan and sausage crumbles.

The menu includes considerations and specialties for health-conscious diners, vegans and gluten-intolerant patrons. “It has always been important,” Courtney says. “No. 1 because we are blessed with such great produce a lot of the year. To not use it would be wasteful. No. 2, in this day and age I don’t think it’s an option to not push boundaries and have vegan options or gluten-free options. There are so many people that it’s a necessary part of their life that it’s not an option not to do it.”

The restaurant only scratches the surface of the story of the Shanower’s business. Before Park Street was realized, Rocky and Courtney created Philosophy of Pie. “I look at what we are doing as that’s our restaurant group and everything else falls below that,” Rocky says. Within Philosophy of Pie, there are three main branches: Park Street, a wood-fired pizza truck catering operation named Bahler Street and POP Fundraising.

Bahler Street doesn’t use a conventional truck. Instead the Shanowers had a box truck retrofitted to hold its oven while presenting a sophisticated, warm and inviting showpiece, something fitting of weddings and other catering occasions. Bahler Street is branded as its own company, separate from Park Street. “It’s a very different style of food,” Rocky says. “It’s a different product. We didn’t want to confuse people.”

The Shanowers have taken their fundraising efforts to another level with POP Fundraising. They’ve created a take-and-bake product for fundraisers. “So what I’ve done is looked for ways to source really good ingredients and get those in a way that we can provide those to a church or a mission or schools and we can give them the majority of the profit margin on those,” Rocky says. “So we are helping them build take-and-bakes and sell take-and-bakes, and cookies.”

Trying to serve all of those functions out of Park Street’s kitchen wasn’t working for the Shanowers so last summer they built a large and impressive commissary a mile down the road. “We prep all of our lettuce, make all of our sauces, we wood grill all of our proteins, everything in that location,” Rocky says. “My thought is that by centralizing that the next store is going to be a lot easier. So it will be the same products. Buildouts are cheaper. Trained staff is less.”

Philosophy of Pie made another investment by purchasing a refrigerated van at the beginning of the year. “This truck has been a game changer,” Rocky says. “We use this truck three different ways. It’s to deliver food from the commissary to Park Street.  We use this for our Bahler Street so if I go to Cleveland for a giant wedding of 300 people, I take this along with product so now my box truck is not overloaded.” It’s also used for POP Fundraising.

As momentum builds with Philosophy of Pie, Courtney says they don’t have any definitive answers on an exact direction for their next step.

“Every year I always say we have a project. It was expand the dining room, build the commissary,” Rocky says, adding that it could be a Park Street carryout or a Bahler Street dine in.

“We’ve naturally had to make a decision to either we want to keep growing and developing this business or just be okay with this business right where it is at,” Rocky says. “We don’t want to just plateau and stay where we are at. We really want to keep evolving and keep things fresh. By growing, there is so much more potential in developing staff. If you don’t have a growing business, you can’t keep staff. They see that… That’s the big thing is we want people to go on this ride with us. Developing partners that can manage the restaurant and to be a part of the growth.

“We’re just looking for that right opportunity and we’ll know it when we see it,” Rocky says.