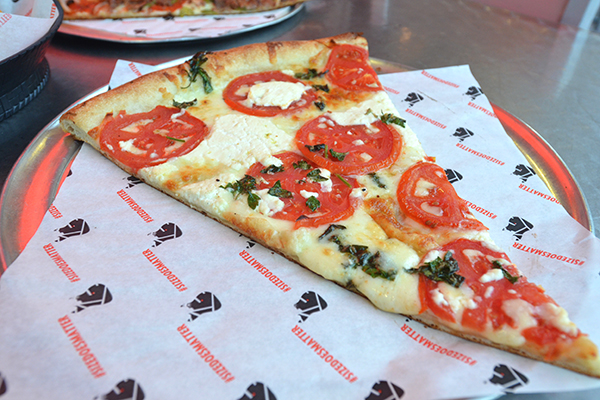 Collins Ave. is at the heart of the dining concentration in Miami Beach, Florida. A little slice joint, Pizza Bar, has carved its piece of the beach community business with giant slices, menu upgrades and strong late-night and delivery sales.

With a motto like “Size does matter,” seven-year-old Pizza Bar serves up the beach’s largest slices, cut from a 30-inch pie. A display case filled with options is front and center in the galley interior. The next feature that draws attention is the rock-n-roll theme showcased throughout the restaurant. Red walls, black menu boards, red neon signs, its guitar logo blazoned prominently and pies named after rock bands sell the rock-n-roll vibe. A wall of mirrors gives the illusion of a much larger space.

It may look like a small, counter-service pizza joint, but Pizza Bar smashed through sales of $1.8 million last year. General manager German Dide says he hopes to crack the $2 million mark in 2016.

It wasn’t always that way. When Dide joined the company nearly four years ago, he ignited the pizzeria’s turnaround with a focus on the delivery business and local market.

Two branded and wrapped smart cars and scooters are critical to Pizza Bar dominating beach delivery, making up 20 percent of the pizzeria’s sales. On weekends, when traffic is jammed, the scooters come in handy to keep deliveries on schedule.

The pizzeria’s sheer volume of foot traffic can prove challenging for deliveries. But, Dide says, they make it work. It’s a balancing act for pizza makers to keep the display windows full and fulfill delivery and carryout orders.

“Always on display, we have 16 to 18 pies,” he says. Pizza Bar’s deck ovens can accommodate four of the extra-large, 30-inch pizzas so it takes a skilled, experienced pizza maker to keep up with the demand for oven space, Dide says.

Pizza Bar has tapped the local employment force in the area to keep a steady lunch crowd. Dide offers discounts to area hotel workers. A win-win, the initiative generates both local and tourist sales. Locals make up 40 percent of the pizzeria’s sales in the tourism-rich area.

Bernie Matz, culinary director at Pizza Bar’s parent company, Menin Hospitality, credits Dide’s efforts to drive local traffic. “As tourist and commercial as this place is, they’ve been able to capture the local market,” Matz says. “If you don’t, you won’t survive.”

Matz joined Menin nearly two years ago and was instrumental in taking Pizza Bar’s menu to the next level. “They were buying bottled dressing and I showed them how to make their own and they were cheaper and way better,” Matz says. “If you are going to make a really good salad, you have to start with the dressing. The bread they were using was wimpy.” Martz worked with Dide to improve the salads and subs and update Pizza Bar’s toppings list.

Dide went beyond just implementing the product changes. He ran with the idea of bringing in new products like prosciutto and arugula, elevating the slice offerings. And when it comes to products, Pizza Bar makes as much as possible in house and doesn’t skimp on ingredients, opting to use higher quality pepperoni, sausage and cheese.

“What (Dide) has done is, little by little…each menu that has evolved, he’s gotten more and more success,” Matz says. “The last menu has some really great, over-the-top slices and he’s done really well because it’s not just pepperoni and mushroom slices.”

Matz applied a caveat to Pizza Bar’s menu innovation. “I didn’t want him to increase costs without being able to increase revenue,” Matz says. The ingredient upgrades have made a huge impact. “The numbers are up over 20 percent,” he adds.

Dide keeps a keen eye on the display window. With a rotation of fresh pies, the window makes it

apparent very quickly which items are not selling. If a product isn’t moving, Dide says that Matz takes a very practical approach: if it doesn’t sell, it is pulled from the menu.

One of the most popular pizzas is a Chicken Alfredo with diced tomatoes, spinach and mozzarella ($19 for a large). There’s also the Frisco that features burrata, arugula, artichoke, sun-dried tomato and pesto ($20 for a large) and the Little Italy with anchovies, mozzarella, arugula, roasted red peppers, black olives and tomato sauce ($19 for a large).

Pizza Bar has become the late-night spot for slices on South Beach, known for its nightlife. Next to the 7 p.m. to 10 p.m. slot, the weekend 2 a.m. to 5 a.m. day part drives the most sales.

Staffing and security can be difficult in the late-night hours. The pizzeria used to cater to the late-night crowd with a DJ, but when the people became unruly, Dide stopped the event.

Protocols for late-night safety, like cameras and staff training, are vital during Pizza Bar’s extended hours. “What I tell my employees is that from opening to midnight be as nice as you can,” Dide says. “After midnight, anyone drunk, get them in and out.” If someone become belligerent or violent, he advises his team to call the police and let them handle any altercations.

No matter the time of day, Pizza Bar remains diligent with the quality of its pizza-by-the-slice offering. The counter display showcases the variety and quality. The staff keeps a log to be sure it’s full and fresh. With few slow times, Dide says, most pies move fast. The pizzeria sells an average of 350 slices each day.

With the slices ranging from $5 to $7, Dide counts on his counter-service for add-on sales. “You have to make sure your employees are on point,” he says. “Make sure they are offering drinks.” A new slushy machine introduced over the summer proved to be a spot-on upsell option on the beach.