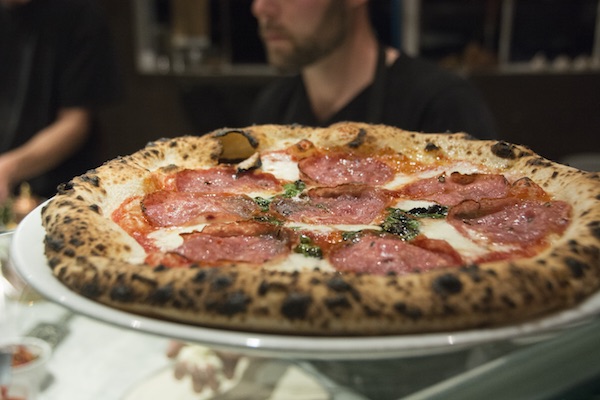 Once considered a deep outpost, Flagstaff — nestled high in northern Arizona’s mountains — is a vibrant college town with an artsy bent. And that’s all the better for Pizzicletta, whose pizza makers practice their craft each day with true artistry. Nothing about this place is typical, starting with its size. At just 650-square feet, Pizzicletta seats 15 and forces its employees to improvise in tight quarters.

Though operating with so little room  certainly comes with its challenges, there also are benefits. For example, owner Caleb Schiff says he gets to interact with or visually assess the dining experience of nearly every customer.

Then, there are the aforementioned challenges.

“The space is definitely limiting,” Schiff says. “We have to really plan out far ahead and think about how we can pull things off in that space when it comes down to what we’ll be serving and when.”

Schiff, who worked in bakeries during high school and college, fell in love with wood-fired Neapolitan pizzas and breads on a visit to Italy. He was so enamored with the product that he ultimately built a wood-burning oven in his backyard to fuel his passion for the cuisine.  After a little dabbling and experimentation Schiff found that he had a gift for producing prodigious pies. So how else could his life story evolve? Of course he was bound to open a pizzeria, right?

“Actually, I never had any intention of opening a restaurant,” Schiff says. “For me, it was purely a hobby. It was fun. I really looked forward to doing it in my backyard and serving it to my friends and sharing it, but I didn’t plan to open a pizzeria. For the first 27 years of my life I was on an academic track.”

Schiff had a Master’s degree in geology and was at a point to where he needed to pursue his doctorate in order to advance his career. It was at thast crossroads that the rock guy became a pizza guy.

“It has been a lot of hard work, but I’m definitely glad I did it now,” he says. “It has taken a lot of energy and I’ve learned a lot. I had no prior business experience and I hadn’t even taken business classes. I feel really fortunate about how things have shaped up and turned out.”

The star of the show, naturally, is the imported wood-burning oven that Schiff had installed at considerable expense. It does Yeomen’s work at Pizzicletta, ultimately turning out everything from Neapolitan pizza to smoked peaches and artisan breads. Schiff, true to the artisan way, goes the extra mile despite his limited space. Everything, even the gelato, is made in-house.

“We aspire to change the food scene in Flagstaff for the better, ” says Schiff. “All of our dough and bread is naturally leavened sourdough. We never compromise on the ingredients, ever. We are a small place that’s ran by people who care.”

James Worden, a skilled Pizzacletta chef/host/manager puts it another way: “It’s about simplicity. But producing simple food does not necessarily mean easy. It’s not easy. A lot of detail, thought, expertise and craft go into it.”

Adds Schiff: “Any motivated crew with time on its hands can learn a lot. I feel like we learn a lot. We draw inspiration from cookbooks and other restaurants in major dining cities. We think hard about the flavor profiles we want to bring to people, then it’s just about repetition and tinkering with what you have on hand or what you want to bring in. But, ultimately, a restaurant isn’t just about food. It’s about the experience people take with them when they walk away. I really make an effort to reach out to our customers and to show them that we care about what we do.”