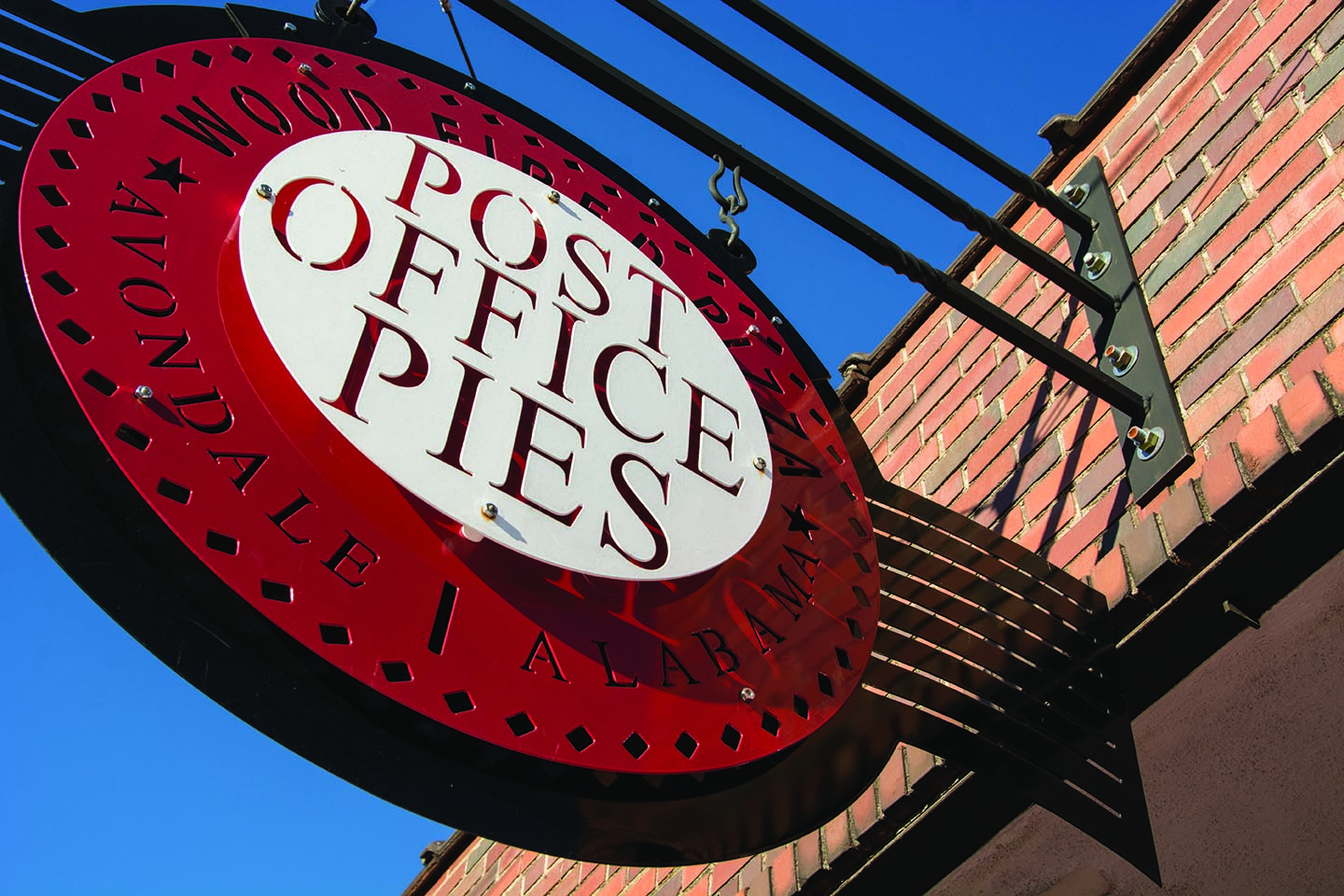 Birmingham, Alabama native John Hall was drawn to the culinary culture of New York City. Years later, a changing food scene and opportunities to transition to ownership brought the young chef back to his hometown.

Collaborating with Brandon Cain and Mike Wilson, Hall opened Post Office Pies (POP) two years ago, looking to incorporate some of the facets of NYC restaurants he worked in and Brooklyn eateries he frequented while also blending the Southern style of Birmingham.

Since the onset, Hall and Post Office Pies have garnered a buzz of national attention from The New York Times, Paste Magazine, Garden and Gun to Thrillist’s “33 Best Pizza Shops in America” and “Best Pizzeria in Every State in America,” to name a few.

A fixture in Birmingham’s hip Avondale Neighborhood, the original POP resides in what was once a post office. “Speaking with my grandfather when we first opened he remembers when the restaurant used to be a post office and that is where he bought stamps. It has a deeper feeling,” Hall says, comparing the Avondale and Tuscaloosa stores.

The Avondale pizzeria is a modern restaurant with an open and spacious footprint, an urban and minimal design; a counter-service order system; communal seating and a straight-forward and locally-focused menu. Two custom-made, wood-burning ovens and make line are open to the dining area. (There’s a third oven tucked away in the kitchen.) There are no microwaves or conventional ovens.

A bright dough room at the front of the restaurant is a showpiece both inside of the pizzeria and for passersby in walkable Avondale. Dough is made every day and twice daily on Thursday, Friday and Saturday. The dough rooms at both locations are key to the POP brand. “We have a small menu and there’s no smoke and mirrors,” Hall says. “All of the hard work we put into the pizza, we want to showcase that.

“We don’t sell wings. We don’t sell a lot of those other things. We do pizza, meatballs and salads. So we want to put that in the forefront as you are walking by or (walking in), the first thing you see is the dough room, so it really drives that point home.”

Hall’s philosophy reverberates through to his crew. “We are not worried about anyone else around us or what’s cool or what’s the trend,” Hall says. “We focus every day on putting out the best that we can put out on a consistent basis. We work damn hard at it every day.”

A lot of labor goes into POP’s menu, says Randall Norman, general manager at the Avondale location. Everything is made from scratch, including fresh mozzarella and ricotta. “We peel like 5,000 cherry tomatoes every day,” he adds.

The POP team takes great care in the products they serve. “We have a pre-service meeting before each shift,” Hall says. “We have tons of staff training and information about the new menu.”

The special pizza that day was topped with spicy marinara, Pecorino Romano, red onions, mushrooms, pepperoni and mozzarella and finished with arugula and toasted bread crumbs.

Up to 50 percent of the 350 to 400 pies ordered each day are the Swine Pie, featuring house-made pork sausage, pepperoni, bacon and mozzarella on a tomato base.

The Italian pizza is gaining ground, Norman says. “The Italian came about by using the by-product from other things we do,” he says. “We make our own meatballs in house. We sear them off and we cook them in marinara sauce. And at the end of the night we have the sauce that we call ‘meat sauce’ so I decided to put that on a base of a pie with meatballs and our homemade ricotta. It’s a pizza representation of a lasagna.”

Basil is offered on every pie. POP puts basil on the side for to-go orders to prevent wilting. “It’s that little extra touch that works for us,” social media and catering coordinator Rachel Wallace says. She actively posts mouth-watering food shots on social media daily.

“I’m always on social media if someone comments, someone asks a question or someone has a problem,” she says. That includes review sites, with which the pizzeria runs promotions. “We want you to write a review,” she adds, good or bad.

The pizzeria leases its space from a neighboring brewery, which provides the restaurant with the opportunity to sell local beer, though it also provides some challenges. In accordance with state regulations, POP sells only beer brewed and wine produced on premise, Wallace says. No other beer or liquor is sold at the pizzeria.

Without the alcohol limitation, the Tuscaloosa store stocks a full bar. It also has even more front-of-house square footage and all three ovens are front-facing.

Having a core team that Hall trusts to run the Avondale store has been vital as POP transitions into a new store and new city. “One of the challenges in coming to a new market is really trying to establish the same feel that you did in the original store and really making a footprint in the community and the neighborhood,” Hall says, adding that it’s about letting people know the POP story.

Moving forward, Hall says, he’s trying not to get ahead himself. “The goal is to get this one running smoothly. With the time that we opened, we missed football season,” Halls say of its new location nestled near the University of Alabama.

“In some regards it might have been a blessing in disguise. It’s allowed us to get our legs under ourselves and work out the kinks and then we will be ready for next year’s football season.”

With both locations, Hall says, they continue to concentrate on the POP concept and its brand. “We are there for the neighborhood,” he says. “We are a neighborhood pizzeria.”