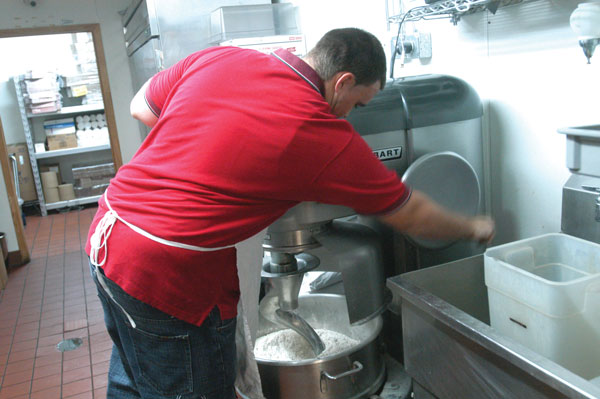 I’ve noticed that the dough-making procedures used by many operators seem to be getting more and more detailed, long and drawn out. I like to think that we are just making pizza dough, not rocket fuel, so the procedure should be a bit less complex than what many of us have made it. Here are some of the things I’m talking about and how we can make dough mixing a bit easier and faster, too.

Dry blending ingredients prior to incorporation of the water is generally wasted effort and really not needed. Your dough will come out just as good if you add the flour first and then put the rest of the dry ingredients right on top of the flour when you’re ready to begin mixing.

Should the water go first or should the flour be the first ingredient in the mixing bowl? If you put the flour in the bowl first it will be more difficult to fully hydrate the flour, often requiring several minutes longer mixing time. But if the water goes in first the flour is actually hydrated faster, which will shorten the total mixing time by several minutes. Doing it this way also allows you to put all of the other dry ingredients right on top of the flour. Don’t worry, as the agitator moves it will thoroughly incorporate all of those dry ingredients into the flour and you will achieve uniform dispersion throughout the dough.

Blending the yeast, salt, sugar and oil into the water is another thing that I tend to see done frequently. Again, this serves no real benefit to the quality of the dough. In fact, it might even adversely affect the quality. When the yeast, salt, sugar and oil are blended together there are two concerns. One is that if the dough-making process should be interrupted before the flour is added and mixing begins, there could potentially be some damage done to the yeast. This reduces its ability to give consistent fermentation, which can impact how the dough rises in the oven and how it opens into pizza skins.

It is interesting to observe that when the oil is mixed with the water, as soon as the mechanical mixing action is stopped the oil almost instantly separates and floats on top of the water. When the flour is added, a portion of it comes into direct contact with the oil. The oil soaks in and that specific portion of flour is now incapable of producing gluten. This obviously affects how the dough feels and performs after the mixing process.

A much better approach is to put the water in the mixing bowl first. If you want to, go ahead and add the salt and sugar to the water in the bowl (no need to stir or whisk), then add the flour and the yeast and begin mixing. Mix for about two minutes at low speed and then add the oil. This allows the flour to fully hydrate before introducing the oil and ensures that the oil cannot be absorbed into the flour and interfere with the gluten development. As a result, your dough will be more consistent in both feel and performance.

Suspending the yeast in the water is another practice that is really just wasted motion. This is done out of fear that the yeast will not be uniformly distributed throughout the dough. But nothing could be further from the truth. If you are using compressed yeast, all you need to do is crumble it on top of the flour and it will be incorporated just fine during the mixing process (hard to believe, but true). Instant yeast is another type of yeast that is best when added dry right into the flour. Dispersion is again complete and thorough. When active dry yeast is used, there might be a valid reason for adding it to the water in the mixing bowl as opposed to adding it to the flour (even though it is in a suspension after hydrating it). The reason why some operators like to add the activated ADY suspension to the dough water is one of convenience rather than dough performance or quality.

Is there any time when ingredients need to be added or blended in a specific manner? When a high-speed mixer such as a VCM is used, regardless of the yeast type being used, it must be suspended in the dough water. This means if active dry yeast or instant dry yeast is used, they must first be hydrated. Once hydrated, the suspension can be added directly into the dough water. If compressed yeast is being used, just put the yeast directly into the water and whisk it until the yeast is suspended. Or whisk the yeast in a portion of the dough water and pour back into the mixer. The salt and sugar are then added, followed by the oil. The flour goes in last.

The most critical aspect here is to begin mixing immediately after the flour is added to minimize oil soakage into the flour. All this is necessary due to the short (60- to 75-second) mixing time common to VCM and other similar type mixers.