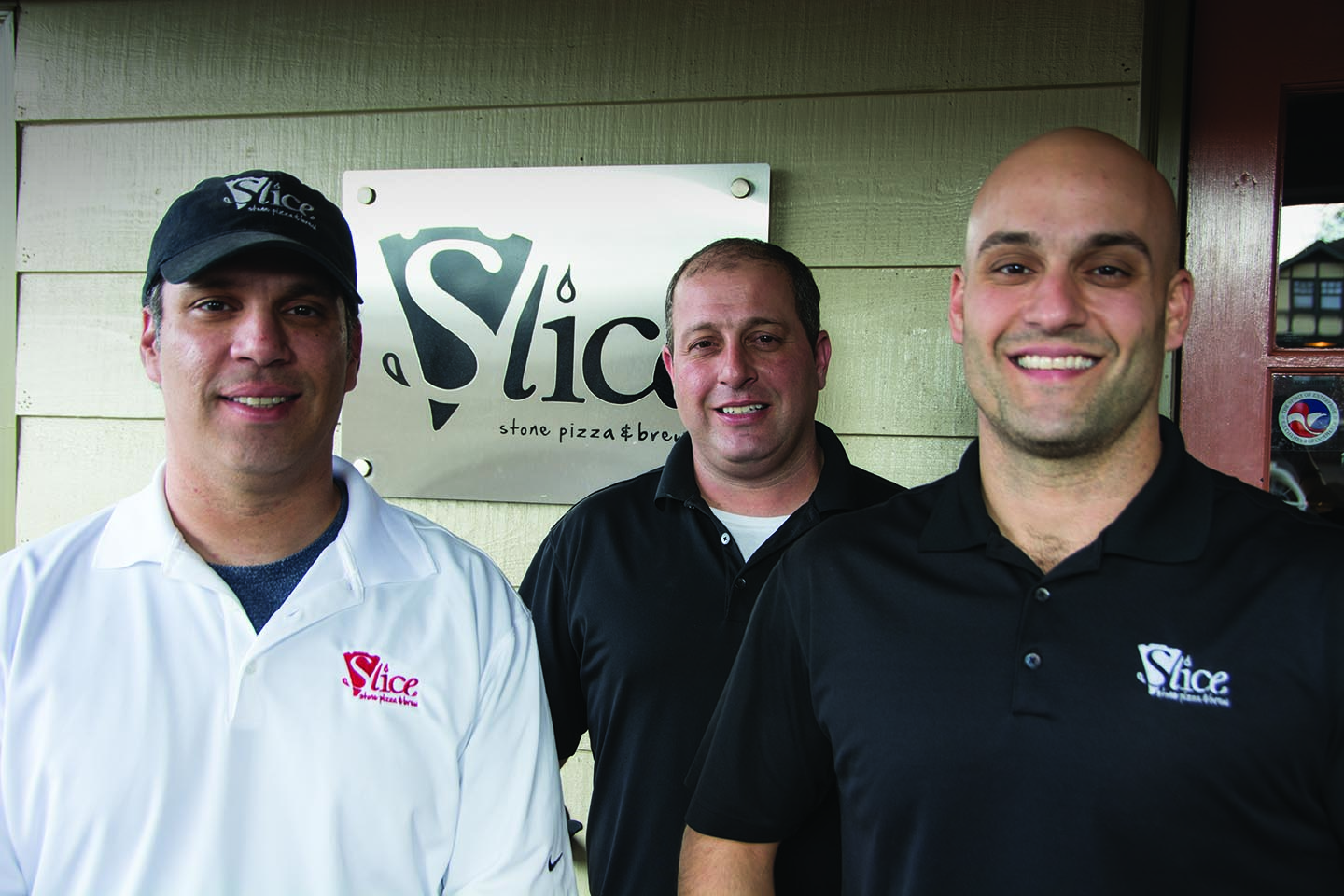 The Bajalieh brothers grew up in their parents’ sandwich shop in Birmingham, Alabama, so going into the restaurant business together came naturally to Chris, Jason and Jeff. They continued their late father’s legacy by reopening Sol’s Sandwich Shop and Deli in 2008. “My mother and father are the foundation of our success because they built in the qualities that it takes to work together,” Jeff says.

The three didn’t stop there. They had a vision to build a concept, even multiple concepts, from the ground up. “A lot of the reasons that we wanted to do pizza is because we knew pizza, but we knew it could be done better,” Chris says.

Jeff spent more than 10 years as a Domino’s franchisee. “We wanted to be on our own platform and be creative and innovative in our own way and be able to sell beer too because pizza and beer go good together,” he says. “We wanted to give it the localized feel and foster community spirit.”

Slice Pizza & Brewhouse was born, opening in the Bajaliehs’ hometown in 2011. Pizza Today took an up-close look at Slice during a visit last December.

In four years, Slice has risen to No. 86 on Pizza Today’s Hot 100 Independent Pizzerias list at $2.8 million in annual sales and is posed to climb amid recent growth. “We should hit $3.5 million this year,” Jeff says during our visit, anticipating 2015 year-end figures.

Situated in a refurbished craftsman-style house, Slice has an instant inviting, cozy and homey feel. Perched on a hill above the neighborhood, its patio has become a destination for people watching in the Lakeview District. The Bajaliehs invested heavily in its huge patio with landscaping and seating that totals 170 inside and out. Indoor and outdoor fireplaces add to the ambiance.

The pizza operation lives by its motto: “Eat local. Drink local. Be local.” Slice sources its produce locally, fills its taps with Alabama-brewed beers and commits its entire operation to community outreach.

“Local dollars create local economy when you spend it within your state lines,” Jason says.

Community engagement extends far beyond sales-donation nights at Slice. Though the pizzeria fills its weekly calendar with those — they call them “Dough Raisers.” Jason says its about “getting out there and putting our money where our mouth is, so to speak, going to events and having ourselves be visible and our voices be heard.”

Slice has donated more than $80,000 to local 501(c)3 organizations through direct donations, gift cards and special events, like its annual Slice Fest, which raised $18,000 last year for local groups. Find more on the block party festival, Slice Fest, at PizzaToday.com/more/SliceFest.

Birmingham has responded to Slice’s generosity and dedication to food creativity and quality with patronage. The pizzeria has received the city’s “best of” accolades four years running.

The Bajaliehs’ collaboration is the backbone of the business and each brother knows his role. “There are many aspects to running a restaurant, so a three-headed monster is better than a one-headed monster,” Jason jokes.

Chris adds: “Jeff is probably more of the working the floor guy, whereas Jason’s is better in the PR area, and I kind of handle what things cost us. It naturally falls into place like that. Some of that is our strengths that really make it work, collaborating all of those together.”

While the brothers are hands-on, they have also ventured out to open other restaurant and lounge concepts in the area, so the Slice staff plays an active role in the restaurant success and growth. The Bajaliehs are able to juggle multiple concepts by establishing a culture of family and empowerment with their employees.

As they look for new hires, Jason says, they are not looking for people to just work at the pizzeria. “Come help us grow,” he tells applicants. “Come be a part of it. Come ride the ride with us.”

Pizza Today sat down with head chef Terrill Brazelton, who exemplifies the pride the Slice crew of 50 takes in the restaurant. He calls the shots in the kitchen and on the menu. “When you don’t have anyone saying, ‘you can’t do that or you can’t order that,’ there are no limitations,” he says. “It’s awesome to have that much freedom as a chef.”

Brazelton has been with Slice since the beginning and his enthusiasm and creativity is exactly what the Bajaliehs want for Slice to be a leader in Birmingham’s blossoming restaurant scene.

To compete, Jason says, it’s important that Slice does not become stagnant. “Don’t let customers feel like, ‘I’ve been there, done that,’” he says. “We’ve pushed the bar with pizza. We definitely look for the adventurous eater and the adventurous drinker — of course we have the traditional things as well.”

It’s a challenge, Jeff adds, “(but, we have to) stay innovative, stay cutting edge.”

Brazelton brings something new and different to each seasonal menu and rotating specials within the season. During the cooler weather months, Slice showcases comfort-based pies like the pizza version of a shepherd’s pie with braised beef short ribs, mushroom au jus, caramelized onion, English peas, carrot and cheddar cheese and finished with mashed potatoes ($21).

An area where the kitchen really gets creative is on its Small Plates menu. “Let’s go crazy with the appetizer,” Brazelton says. “Let’s put something out there that you’ve never seen before. That’s our chance to play.”

The unique Pork Belly Egg Roll is a crowd pleaser and features spice-rubbed and soy braised pork belly, sausage, shredded carrots and Kohlrabi and is served with citrus soy and kimchi ($9). The fried Conecuh Sausage Corndog has a honey and jalapeno corn batter ($6). Fire-baked Wings ($7) and Baked Feta ($8) are big hits as well.

Keeping Slice’s menu focused on small plates, pizzas, salads and sweets, Brazelton says, adds to the creativity by not having to dedicate attention to entrees, too.

Slice led the way in the area by dedicating its taps exclusively to in-state beers. Its strong beer program centers around craft beer nights, tap takeovers, and pizza and beer pairings. Alongside each pizza on the menu is a suggested beer that pairs well with its flavors.

Part of creating its destination appeal is having its own Kolsch beer, brewed at Alabama-based Yellowhammer Brewery and only available at the pizzeria and the brewery, a two-hour drive away. The tap program is accompanied by an array of bottled and canned beers, craft cocktails and wine.

Going into year five, the Bajaliehs see it as a critical year for the concept. Coming off of record sales, Jeff says, “I definitely think we have peaked because we only have so many seats and so many days in a year. That is why it is so important to come up with new ideas.”

One avenue is eyeing other markets in the state to grow Slice, Chris says. “We feel like it’s very duplicable,” he continues. “But you have to be careful. I don’t see 20 store, but five, maybe.”

Jeff says, they have to proceed cautiously. “We’ve created a destination appeal here, so we don’t want to take away from that,” he says. “It’s an old, unique house. It’s got a good vibe. It has a warm, homey feeling to it when you walk it.”