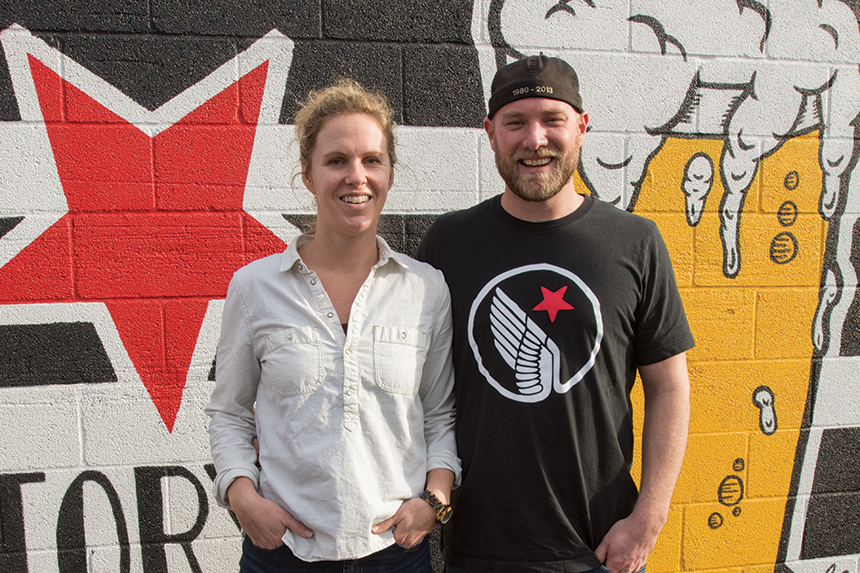 Pizza Today On the Road: The Post, Louisville, KY

Pizza Today On the Road: The Post, Louisville, KY

While walking a few blocks from their home in the Germantown neighborhood in Louisville, Kentucky, Laura and Nash Neely noticed an old VFW post for sale on Germantown’s main thoroughfare.

“We had a real love for the neighborhood and knew the vibe over here,” Laura says. “We toyed with the idea of doing (a pizzeria) closer to home where we are from in Western Kentucky and it seemed safer, but we love Louisville… We started looking at properties here and saw this and felt like this is right in our backyard basically and in a neighborhood that we felt was continuing on an uptick of seeing more action with our younger professional demographic, and also a neighborhood where people have lived here for generations and love this neighborhood.

“Part of what we liked was having this location that has been a part of the neighborhood, part of the community, the history and kind of preserving it for the current generation to enjoy,” Laura says. “Instead of getting something in a strip mall on the edge of town, just the character that comes along with this was what we wanted.”

In the summer of 2013, the Neelys put in a modest offer and were taken aback when it was accepted without a counter or rejection. Next came the challenges and hurdles of building their first restaurant from an empty shell. The Neelys harnessed their individual talents to get the pizzeria off the ground.

Laura capitalized on her career as a practicing attorney to rezone the VFW post with the local municipality, saving the Neelys thousands in attorney’s fees.

Nash’s background is filled with pizza restaurant experience. “I felt like it had to be pizza,” Nash says. “It was the only thing that I had relevant experience in and that I felt passionate about and I knew it well enough. I never really considered myself a culinary guy or a chef. And there is something about pizza that just fits right underneath that. I always thought of it as a job that I loved to have. It was sort of my fraternity throughout college, the fact that I went to my pizza restaurant every night and worked and saw my friends, and I loved it. I wanted to recreate that vibe because I had seen it work before. I knew the things that made it work well and I knew the things that made it not work well.”

While Laura coordinated the build out, Nash gathered a team to solidify the menu centered on condensed offerings of New York-style specialty pies, slices and a few other offerings like sandwiches and salads.

During the construction phase, the Neelys became very active in the neighborhood association and area business association. In such a tight-knit neighborhood, it was vital for the couple to build local engagement and rally the community to champion the pizzeria.

The Neelys opened The Post in January 2015, a year and a half after purchasing the nostalgic building. The finished rehab fit perfectly into its surroundings. “It’s one of the things that I am most proud about is that despite the fact that everything in there except for the shell of it is brand new, it feels like it has been here for a long time,” Laura says.

Even the restaurant’s name and branding paid homage to the building’s heritage.

The community embraced The Post from the onset and the Neelys had an instant hit on their hands. The Neelys say they owe its success to the staff, who has a stake in the decision-making. Laura and Nash created their employment structure and programs based on empowerment. They envisioned a restaurant where they were not required to be in the shop at all hours of the day. “A large part of it is building trust and that comes from time together and some of these guys I’ve known since well before we opened…” Nash says. “That sort of mentality has been a catalyst in them taking ownership and feeling like they are a part of it and they want to run it…they have the business’s best interests when they are making decisions in there, and that’s the biggest factor.”

The Post operates with a general manager that also serves as a kitchen manager along with Nash and two front of house managers. “They tag team doing scheduling, new-hire training and stay on top of cleanliness,” Nash says.

The Post’s crew performs in a high-volume environment in the 90-seat space. Thirty percent of the business comes from carryout. It is the area where they have been refining and honing for efficiency.

The Neelys considered delivery, but it didn’t fit their footprint or staff structure. It’s a source, Nash says, they can look at down the road for additional revenue.

A major contributor to The Post’s more than $2.2 million in annual gross sales is its slice business. “I love that we sold close to 200,000 slices of pepperoni last year,” Nash says. “That just seems insane to me. It’s so simple and basic, but it’s still the best thing on the menu. It’s quick, it’s easy, it’s cheap. People are still learning it and we are still growing those sales.”

On its specialty pizzas menu, Nash says, “The White Flag, South Pacific and the Lone Wolf are our best sellers.” The Lone Wolf is a “works” or deluxe pizza. South Pacific has a garlic olive oil base and is topped with ham, bacon, pineapple, onion, roasted red peppers and a sweet chili drizzle. While The White Flag also has a garlic olive oil base, it features red onion, spinach, roasted red pepper, ricotta and fresh basil.

The Post also created unique Slice of the Day specials and a monthly featured pizza. The kitchen team gets creative with the monthly pies and many include a highlighted ingredient from other local restaurants, like bbq from Feast, a popular BBQ joint. Featured pies have included a taco pizza, loaded tater tots pizza, Feast BBQ Pizza and the Royals Hot Chicken and Waffles Pizza. “By far, that Chicken and Waffle pie is the most popular thing we’ve ever done,” Nash says. “That’s a very symbiotic thing we had going on with Royals (a local Nashville hot chicken restaurant). We got to the point where the week with the opening buzz we were picking up 10 to 15 pounds of chicken a day. I think we are going to circle back with it twice a year.”

Other menu items have also received fanfare. “The trick of the locals here are our sandwiches,” Nash says. “Don’t sleep on the sandwiches.” With bread sourced from a New Jersey bakery, he adds that the Italian Sub is a contender for best in the city.

The Post is a local beer destination with nearly 25 percent of its sales coming from beer, (and another five percent from other alcohol beverages). Laura curates the list herself and applies a simple formula to its 16 draft lines. “You try to keep an amber or a red, something dark — maybe a stout and a porter, a wheat ale, a sour, a cider and that’s maybe half of the taps, and then the other half is between pilsners and pale ales,” Laura says. “If there are not at least four IPAs on the list people are complaining.”

Nash adds: “We’re very craft beer-oriented here and she keeps it fresh. Nothing is a permanent tap handle here other than Coors, and Coors was our giveback to the neighborhood to have one core domestic and sell it at a very cheap price.”

With their systems finely honed, the Neelys have their sights on growth. They plan to expand to other neighborhoods, giving their dedicated employees a chance to grow with the company. “Growing it for them is the main motivator,” Nash says. “Given who they are and what we are capable of as a team, I could see The Post with three or four locations. Talk to me in five years and I may say ‘let’s go 10.’”