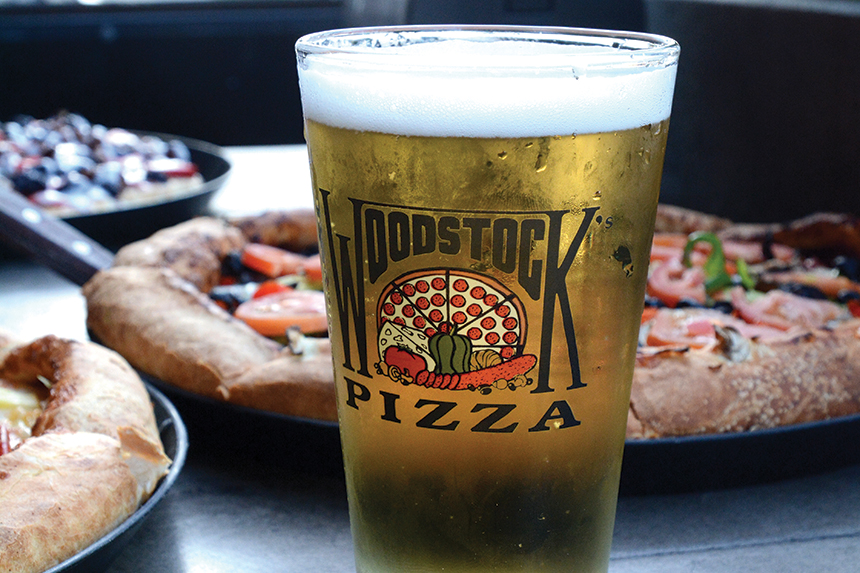 In November 2019, San Diego-based Woodstock’s Pizza became the highest performing independent pizzeria in the U.S., moving up to No. 1 on Pizza Today’s Hot 100 Independent Pizzerias list.

Pizza Today sat down with co-owners Jeff and Laura Ambrose at the Pacific Beach location to learn more about the eight-unit, $22.5 million pizza company in Southern California.

Rooted in college communities, Woodstock’s has carved out an over 40-year niche with pivotal moments that have driven its success and changed its course.

Chuck Woodstock founded the first Woodstock’s Pizza in 1977 near Oregon State University in Corvallis, creating the foundation, principles and brand that are still present today. Chuck added a partner, Mike Chew, in 1980 as Woodstock’s opened its second store in San Luis Obispo.

While Jeff began as a delivery driver at that original location, he was quickly promoted to help open two locations in Santa Barbara and Chico. It was then that Chuck and Chew asked Jeff to be a partner on the San Diego State University location.

Tragically, Chuck and Chew were killed in a private plane crash on their way to Pizza Expo in 1985, leaving family to oversee Woodstock’s Pizza. Jeff was later named Woodstock’s president.

The Ambroses have held true to Chuck’s vision. “We tried to hold on to many of the things that he originally started with this business,” Laura says. “We still use the same sauce recipe. We still do the fold over on the crust. We still have the same focus for the overall business. We still believe in his philosophies of a taste of every topping in every bite. There are certain things that he set out as a philosophy, even sharing ownership with the management team was a foundation of his business.”

“And evolve it and grow it,” Jeff adds. The Ambroses went on to expand Woodstock’s reach in California, adding stores in Santa Cruz and Pacific Beach.

The Ambroses have approached Woodstock’s decades of evolution with a focus on the fundamentals and a keen eye on what’s next.

Woodstock’s Pizza is that pizzeria in its college communities that has reached a legendary, nostalgic status. It’s achieved this through adapting to the communities and customers. Each location has a large footprint with a capacity of 100 to 250 guests. They also have brand-unifying elements, while also being unique to the communities they serve. The signature tongue and groove wooden benches, brick and a young, hip vibe connect the locations.

Woodstock’s has modified its traditional counter-service style to incorporate food runners and even testing a combination server model in its newest locations.

Staying relevant is always top-of-mind with Ambroses and vital to Woodstock’s growth. “We want to continue to have that kind of legendary status of what people love about the name and the brand but you still need it to be cool,” Laura says. “It means we can’t just be time warp on 1980 to still look relevant in 2020.”

The biggest changes and upgrades can be found at Woodstock’s two newest buildouts. The Chico store was relocated after the building was flooded and San Luis Obispo took over the neighboring square footage. Both locations received a complete remodel and updated look.

They created a unique space in San Luis Obispo called The Backyard, giving it an outdoors feel and it has been a big hit. “It was a decision that we were very successful there and we wanted to not be chasing away business. We decided to take the space next door to us,” Jeff says, adding that doubling its size sparked a 30-percent sales increase year-over-year.

Woodstock’s menu has grown from three combinations to nearly a dozen, a rotating mix of innovative pies balanced with the staples. The menu varies slightly at the stores to bring in local favorites. The beer offering went from three drafts to 24 and better wine choices. They’ve switched to more environmentally-friendly practices, like using washable, reusable dinnerware instead paper and plastic for dine-in and investing in recyclable to-go containers and compostable pizza boxes.

“What we recognize as we go through these iterations is that the market is changing and even amongst college students, there is much more interest in diversity of flavors and more of the range of beverage choices,” Laura says. “To stay relevant with a youthful audience we recognize that we need to be constantly aware of where the market is changing and moving in that direction without chasing fads, instead seeing that these are long-term trends and we need to be on top of that.”

Jeff adds, “We are trying to stay, as Laura, said, relevant, but at the same time appealing to the nostalgia of Woodstock Festival and just being around as long as we have been around. But it’s a constant reviewing of what’s going on, taking feedback from customers. Laura is really good about getting market data and surveys and trying to keep abreast of what people are looking for.”

In the beginning, it was Chuck, Chew and Jeff leading the charge. Then it became Jeff and Laura. “A long time ago, I wanted more out of owning this business than owning a job or buying a job. If it can’t run without me day-to-day, to me it’s not a business,” Jeff says. “We tried to build a team around us that can run everything operationally.” Today, Woodstock’s has a 13-member administrative team who oversees the stores, from marketing and finances to IT and human resources.

Woodstock’s has roughly 420 employees and frontline employees are at the heart of the operation. Jeff says they apply a servant-leadership model to employee management. “My job is to serve the people that are on our administrative team, whose job is to in turn serve the general manager/assistant general manager, who then support the shift managers and hourly team members, then ultimately supporting the customers,” he says. “Instead of a normal pyramid organizational structure, we actually turn the pyramid upside down. It’s really the approach that I try to give our people the tools that they need to be successful.”

Its core values impact every facet of the business. “Our core values spell out FUELS, which is fun, uniqueness, excellence, loyalty and service,” Laura says. “It does start with fun. And we do believe that working at Woodstock’s should be fun, no matter how many people you have and how insane it gets in the restaurant, it still can be pretty fun.”

FUELS attracts their target employees — college students. While other restaurants may stray away from hiring college students, Woodstock’s recruits them. “That is a very deliberate decision…,” Laura says. “We know the vast majority of our crew members will be moving on because they are in college and they have other career goals. However, when they are with us, they are so positive, full of energy, intelligent, motivated that we think it is a great trade off to have them for the time that we do have them.”

Through Woodstock’s “Make It Right” philosophy, frontline employees are empowered to help solve guest issues. “We have our philosophy and secret to service called Make It Right,” Jeff says. “If we mess up, our credo is to make it right for the customer, whatever you need to do to make that happen.”

In addition to competitive pay, Woodstock’s prides itself on providing team members with flexible scheduling. “It’s really important to us that we exhibit loyalty to our employees and that they in turn will be loyal to us,” Jeff says.

For those who want to advance with Woodstock’s, the company offers an employee stock ownership plan and a vigorous manager-trainee program.

Woodstock’s Pizza has become a fixture in the communities, not just the colleges they serve.

“There is no doubt that we have had our strengths in California college markets,” Laura says. “That continues to be what our focus is. But what we’ve also realized over the years is that where we’ve managed to keep a very high volume in times when the universities aren’t in session is by also having a strong connection with the community. So ideally, we want to have a great mix of college age as well as community members enjoying it together.”

Chico is a prime example. The town is near Paradise, which was destroyed by the Camp wildfire in 2018. Woodstock’s continually fundraises for fire victims. Each store holds several youth and school fundraisers. Last year, Woodstock’s donated more than $200,000 back to local groups.

Woodstock’s has no plans to slow down. Jeff, Laura and the entire team are taking the company’s 40 years of experience to push into the 2020s with vigor.

Watch as Jeff and Laura offer essential advice to other operators in the On the Road video series available at pizzatoday.com/news/videos/ or @PizzaToday on YouTube.