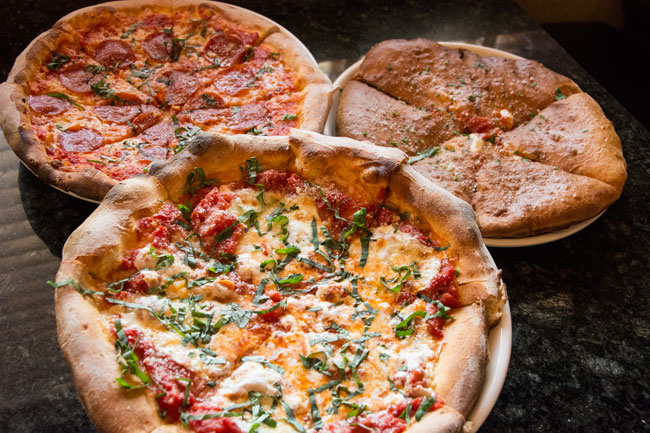 When we visited Ciao! Wood-Fired Pizza & Pasta this past summer, it was a late morning visit. The store was empty, flames from the oven were just about right and Owner Mark Campagnolo and General Manager Bill Oechslin were both on-hand to greet us. One by one, pizzas, appetizers and signature drinks graced a table by the window for our photographer; within the hour, however, we quickly found we needed to clear the booth as we watched tables fill up one by one. By noon, every seat in the large restaurant was taken –– including the bar. It seems Ciao! has struck a nerve with local residents.

Campagnolo’s father emigrated from Italy and landed in Ithaca, where the job market boomed post WWII. His father worked nights in the restaurant business and eventually opened his own place in 1960 with just $800. “I worked with my father since I was a kid,” Campagnolo says, “and then I went to college down in Miami not knowing what I wanted to do, really.”

Campagnolo worked for a number of large restaurant chains, where he learned a lot about corporate operations. On a summer vacation back to Ithaca, he found the local landmark Italian restaurant had closed and sat empty for four years. Campagnolo and a friend bought the business, opened it back up and he owned it for another 12 years before selling to his partner and opening a popular seafood restaurant called The Boatyard Grill. After a year, his former partner closed his Italian joint. Campagnolo’s Boatyard customers kept asking for pizza and pasta, so Campagnolo opened Ciao! in a 3,500 square-foot barn in 2010. “We’re very ‘fussy’ and conservative about where we go, what we do and how we do it,” he says. “We either do it right, or we don’t do it. All of the elements have to click.”

And “right” is an understatement. “In my original forecast, I figured we’d do about $1.8 million or so based on our square footage,” Campagnolo says. “The fact that we’re doing basically $3 million here is an anomaly. We’re in a small town. There are not many people here.”

Adds Campagnolo: “There are more restaurants here in Ithaca per capita than New York City. It’s one of the few bragging rights Ithaca has. But a lot of them are very ethnic. They’re all very good, but Ithaca is not a chain town. The chains don’t thrive here at all.”

“Starting out, we had a lot of things going for us. We had a lot of name recognition. My family has been deep-rooted in this town for a long time,” Campagnolo says. “That’s a good and bad thing. It’s good that people know us, but it’s bad that the … bar is (set) way, way high in terms of what we deliver.”

The pizza is a combination of traditional and Neapolitan. “That’s where the oven comes in,” Campagnolo says. “Making that balance work was as little tricky because we were always tweaking our dough. … It just so happens that there’s a giant niche here wide open for this.”

Dough, sauces and desserts are made in-house, seafood is brought in fresh and steaks are even cut on site.

The restaurant has a dining counter built around its oven and a full bar with a regular happy-hour crowd. Signature drinks, beer and wines –– including a house label –– make up about 25 percent of sales. “Of all the alcohol sales, wine constitutes 50 percent of it,” Campagnolo says.

Ciao! uses a combination gas/wood-fired oven, which is more conducive to a high-volume restaurant. “Gas ovens are nice and you get the same top and bottom heat; however, gas burns with moisture in it,” he says. “You add wood, and it imparts wood flavor and dries the heat. With the dry heat, we just feel the dough and the pizza produces a better product.”

The menu is admittedly large –– harkening back to Campagnolo’s Italian roots. There are polenta fries, wood-fired wings, an extensive pasta menu, and family-style takeout. “People in Ithaca don’t look at us as just a pizza restaurant,” Oechslin says. “They look at us as a full Italian restaurant with pizza.”

In Ithaca, “everybody works,” Campagnolo says, citing the local unemployment rate is the lowest it’s been in nearly 25 years. With Ithaca College, Wegmans food store (which employs 450 people) and Cornell University, the labor pool is limited. Ciao! employs about 70 people, with five skilled to work the oven. It’s admittedly a labor-intensive model –– we watched one employee skillfully cutting fresh salmon, and even the chocolate sauce for the dessert arancini is homemade –– with lunch and dinner dayparts available seven days a week.

With so much made in house, “we try not to waste anything,” Oechslin says. “We try to stay on top of dating and rotating. … Pizza itself is fairly inexpensive in terms of food costs, but working with the same purveyors that we have and try to keep quality ingredients is important.”

There’s no delivery. “We’re already busy,” Oechslin says. “It’s not that we couldn’t … I just can’t imagine (managing) the extra element of delivery drivers (and) where they’re headed and controlling that at the same time.”

Although word of mouth is important, Oechslin and Campagnolo don’t overlook the power of modern marketing. There’s a strong social media presence, and Oechslin says the company utilizes radio advertising and takes advantage of the local colleges’ students and family. “January and February are two huge months for us,” Oechslin says. “When The Boatyard is a little slower, we can push people down there, and they can send people in the summertime up here.”

Fund-raisers, partnering with the local schools, offering donations and providing much-needed supplies to New Yorkers after Hurricane Sandy help strengthen the Ciao! brand, but it also further illustrates the fact that the Campagnolo family is ingrained in Ithaca far beyond their restaurants.

Oechslin says they’ve considered opening a second store, and went as far as looking at a place in Syracuse, New York, but ultimately found the rent too high. They’re looking at a place about 30 miles away and feel their concept is ready for expansion. They’ve already got great relationships with their vendors. “We feel like we’ve got our food standardized to a point where we feel comfortable enough to replicate outside the restaurant,” Campagnolo says. “We’re very specific on how we manage prep and staff. Being 30 miles away, it’s close enough to where we can bring some personnel over at least for a while to help get things off the ground. We feel comfortable enough that our product is safe to bring out of town. … We’ve had enough time, and we’re ready.”