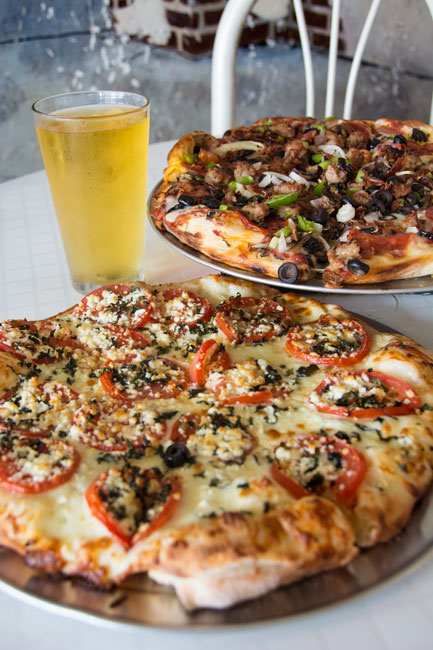 Longevity in the restaurant business is a dream for many operators. For Zito’s Pizza owner Steve Silverstein, opening a pizzeria in 1988 was a career change but not entirely out of his comfort zone. After years in food sales, Silverstein had tired of working for others and wanted to own his own business like his uncle, a New Yorker with 12 restaurants of his own.

“I never related to any other type of work besides being around food,” Silverstein says. “My mom became a vegetarian at a very young age, my dad wasn’t a very creative cook, so I had to learn how to cook for myself very young.”

He enjoyed eating at a local Italian restaurant and when it closed, Silverstein took over the lease, learned how to make pizza from the existing owner and changed the name to Zito’s.

Initially, going from serving restaurants to owning one presented some growing pains. “I had the only keys to open and lock the doors, so it was just me. I had two employees,” Silverstein recalls. Hard work eventually paid off, Zito’s business grew and he realized he needed to expand.

The company eventually grew to six stores, two of which his sons, Zachary and Spencer, now manage. One closed last year due to excessively high rent, but with five stores sales total an impressive $8 million.

“Every one of our stores we opened within a distance that we can double our deliveries on, six miles top. We’ll deliver I’ll say around three miles away. We can hit that median delivery zone with two different stores,” Silverstein says. Delivery accounts for 35 percent of business.

One of the biggest keys to Zito’s success is a surprisingly large menu. “When I first started out, I realized I didn’t have to compete” by creating a bigger menu than his competitors, Silverstein says. After 28 years in the industry, he’s seen multiple generations of customers visit his stores, and as the industry has changed, so too has his menu. He keeps the staples around for longtime customers but understands a larger variety encourages repeat dining. Aside from traditional offerings like pizza and calzones, there are sides like Irish potatoes and stuffed sausage, hot and cold subs and homemade lasagna, jumbo cheese ravioli and tomato basil angel hair. Salads are offered in small or large sizes. Signature pizzas include classics like a Margherita ($19.49 for a large), a Zito’s Meat Lover’s piled with sauce, ham, bacon, Italian sausage, pepperoni and mozzarella ($19.99 large) and a Grilled Philly Cheesesteak with Alfredo, grilled steak, green peppers, onion, mushroom and provolone cheese ($19.99 large).

One of Zito’s biggest movers is its homemade cinnamon knots, baked dough covered in cinnamon sugar and drizzled and served with a side of icing. They’re $7.49 an order –– and worth every calorie.

Dough is made almost daily, sauces are blended and cheese is ground in-house. “I only use Wisconsin cheese,” Silverstein says. “It’s more expensive, but I haven’t changed mozzarella cheese in 27 years.”

Although the restaurants are high capacity and could use conveyor ovens to maximize volume, Silverstein prefers deck ovens. “I just think a pizza needs to cook right on a deck,” he says. “The conveyor ovens that some of the big guys use, you just can’t get it the same as it does out of a deck oven.”

Admittedly, manning a deck oven is an acquired skill. Silverstein starts employees topping pizzas and “as they make more money –– we’re at $10 an hour minimum wage here now and it’s going up, up –– the better guys, they go onto the ovens. They get paid more, and they’re our best guys,” he says.

Beer and wine are available, with anywhere from eight to 20 beers on tap.

With five stores in a competitive area, Silverstein appreciates the power of marketing, including social media. “We like to do the nicer glossy pieces,” he says, adding that although he does some couponing, “we like to keep our prices very, very fair for what we give (customers).”

The state of California places heavy mandates on business owners –– and thus more emphasis on administrative costs and careful attention to everything from ADA compliance to the time employees take breaks –– so Silverstein keeps a close eye on food and labor costs. “It’s kind of old-school, but part of the combat is that we hire kids from the different schools in the area and we like to hire local from the colleges. … It’s good word-of-mouth. Everyone knows about us, making it a good place to work. We keep our employees a part of the business.”

Silverstein originally opened a second store doing carryout and delivery only, but realized that wasn’t his concept. Opening his second dine-in location, he said he felt comfortable in his restaurant practices and didn’t want to borrow money. “I wanted the business to generate the funds for it, and that’s when I knew. … That’s where it starts to change. As an owner, you can’t be in two places at once and I would for many years, when opening stores I’d spend three (or) four months in that store that opened. Now, all of our managers get trained at one store.”

If the company is building a new unit, other employees will spend time at an existing store “and it kind of becomes second nature to what they’re doing” by the time the new Zito’s opens, Silverstein says. “We promote all of our managers from within.”

Silverstein says even though he’s worked hard to build consistency within the brand, “people will tell me that ‘I like this store’s food better than that store.’ And, I say: “we make it the exact same.’ In their mind, the people
(and) the atmosphere has something to do with it.”