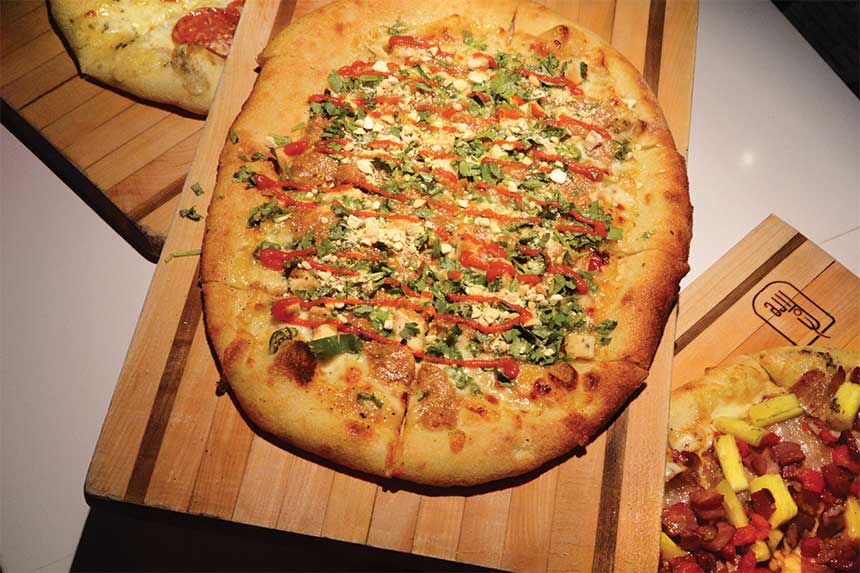 Spokane’s Fire Artisan Pizza holds its own amongst heavy competition

In downtown Spokane, Washington, two things are certain: there will never be a shortage of restaurants, and those restaurants will never have a shortage of beer. At Fire Artisan Pizza, the goal was to combine artisan pizza with a great beer menu. Front-of-the-house manager James Miller says the restaurant itself has been open for five years, but local restaurateur Jingou Sun, who owned an Asian-fusion concept next door, bought out its owners a year ago and took over operations.

Currently, those three investors own Fire Artisan Pizza restaurants in Idaho and Montana, but Sun now runs hers autonomously.

Admittedly, downtown Spokane is restaurant and bar heavy. Nearly every corner touts a local restaurant or brew pub, making competition fierce. “All of our pizzas are pretty unusual,” Miller says. “Most places downtown are pretty straight-forward with the cheeses and pepperoni pizzas. We have all that, but we also take things one step farther. We try to find ingredients that really work, that are still unusual for a pizza but still work and will taste fantastic.

“Because Jing owns Asian restaurants primarily … she’s been able to add Asian (flavor profiles) into some of our pizzas, which has been really interesting to see,” Miller says. They kept several of the company’s best-selling items but added a few, like the Northshore Pizza 2.0 (Tonkatsu sauce, mozzarella and provolone cheeses, barbecue pork, Kansas City bacon, roasted red pepper and pineapple at $16) and the Carne Asada (olive oil, roasted garlic, mozzarella/provolone mix, marinated carne asada and fresh pico de gallo for $17).

“We always do specials every month, and the menu is slowly evolving,” Miller says. Still, pizza accounts for 65 to 70 percent of sales.

Asian flavors play such a big part that the restaurant’s top seller is the newly formulated Thai pizza, which features a sweet chili sauce, mozzarella and provolone cheeses, house-made chicken, Serrano chilies, green onions and a cashew satay. It’s finished with cilantro, cashews and sriracha –– and yes, prepare to sweat a little from the heat.

Aside from traditional toppings, Miller says they experiment with flavored salts, which can change the flavor profile of any traditional pizza. There’s a habañero sea salt they encourage people to try that adds a bit of heat, and a truffle sea salt as well.

The restaurant burns apple wood in its oven, and “our fire has never gone out in the five years that we’ve been open,” Miller says. “Someone comes in, even if we’re closed, every day and stokes the fire. What we do at night is we build the fire up really high so that it’ll burn until the next morning. It’s caused a couple of chimney fires, but nothing too major.” The temperature flares to 900 F but can dip as low as 500 F when the restaurant is at full capacity. Wood is dropped into a chute and stored in a cool, dry cellar below the restaurant. The oven can fit anywhere from five to 11 pizzas at one time depending on the expertise of who’s running it. Pizzas bake in five to eight minutes, but it’s a tight fit in the area, and employees must be skilled.

The restaurant offers a gluten-free crust, but it is smaller than their traditional pizza. “We do everything on boards, so there’s a lot of board changing.” Miller says. “When someone comes in who is gluten-free or has Celiac’s, we’ll ring a note into the kitchen and we’ll do a full wipe down of everything, and we do let people know that there is semolina in our ovens, so there is going to be some contamination, and that’s just a risk that we can’t get around.”

Fire Artisan offers wine and 16 beers on tap, with nine of those rotating constantly. “All of our rotating beers are Northwest specific,” Miller says. “We usually keep it (from) Washington, Oregon, Montana (and) Idaho.”

The same applies to the wines, which they recently added a varietal on tap. It does make it cheaper by the glass, which is appreciated,” Miller says. “It also gives it a different flavor, which is something a lot of people don’t think about. Sitting in a big metal barrel, it’s going to alter the flavor a little bit, and I think that’s kind of interesting.”

They offer a popular special that includes a beer growler, a fill-up and a pizza for $30, but the special also encourages patrons to return for $12 return fill-ups –– and perhaps a pizza while they’re at it.

When Sun took over daily operations of the Spokane location, she changed a popular lunch special from half a pizza and any salad to a personal-sized pizza from a prepared list of popular choices and a house salad. The original special offered more options for the customers, but it also meant wasted product because halves of pizzas were being tossed if no one ordered the other half. “It was a lot to keep up with,” Miller says. “Now this is much more straight-forward, and it’s not as expensive for us. It was a loss when we were doing it before. We were trying to get it to where we (are) even or a little bit above now. Our top pizzas are still on that list. Our salads are just really tasty, so people were a little bit bitter about that.”

Spokane’s residents seem to migrate out of the state during the summer months, and “winter is actually our busiest time of the year,” Miller says. “Our fire is nice and cozy for our winter patrons. I’ve never worked anywhere where we’re busier in the winter than we are in the summer.”

To help generate business year ‘round, they use Facebook and Instagram but recently turned to radio for additional marketing like their “Working Women’s Wednesday” promo. “We did specials for all the ladies with $8 pizzas and $5 wine pours,” Miller says, adding that it was a wildly successful promotion.

The station the company partnered with had a long-time DJ, and “she does the people-stuck-in-traffic hour, so a lot of people listen to her while they’re commuting.”

The majority of sales are dine-in, through Fire Artisan recently joined the ranks of restaurants using third-party services like Uber Eats to deliver their product. “It’s been hit or miss for us,” Miller says. “Some days we’ll get just a couple and other days we’ll get a bunch.”

Miller admits using a third-party company has been “tricky,” he says. “It’s weird having a third-party person delivering something with our brand but their face. … We do encourage people to come in so we can give them the customer service that we provide, so we promote to-go orders more so than Uber Eats. … It is difficult. Our dough does not travel well. We really are trying to provide an in-house customer experience because it’s so much different than if you wait 10 minutes and you’re eating (a pizza).”

Fire Artisan Spokane seats about 45 people, and the restaurant is manned by a team of 14 employees. “It’s been tricky finding reliable work, people who want to show up and represent the brand well,” Miller admits. “My biggest thing is calling references. I think that is the biggest help when looking for new employees. Ninety percent of the time the old manager will be pretty truthful, especially if you call a couple of them. You can compare.

“We have been very lucky. Right now we have a very good core team.”

With an owner who helms several concepts, Sun has had to delegate daily operations to trusted employees like Miller.

The initial investors are interested in taking the Fire Artisan brand outside the Pacific Northwest, but Sun is content with her stable of local brands. The area is a mix of local restaurants dotted with big-name chains, making it difficult to grow in the immediate area. Still, says Miller: “There are some hidden gems in Spokane, that’s for sure.”