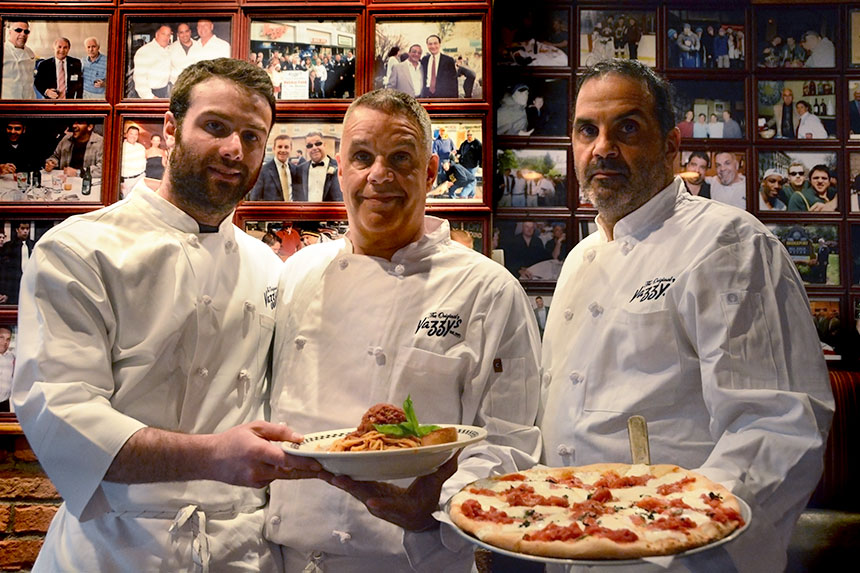 Pizza Today on the Road: The Original Vazzy’s, Bridgeport, CT

Pizza Today on the Road: The Original Vazzy’s, Bridgeport, CT

Vazzy’s celebrates quarter of a century in Connecticut

Bridgeport, Connecticut, may be a small town, but its region has enough room to hold Johnny Vazzano’s four The Original Vazzy’s pizza locations and several other Italian and pizza eateries under different names. (Total sales? A cool $12 million.) Opened in 1993, Vazzano, who hails from a family that owned a well-established laundry business as well as other restaurants in the area, started his first restaurant right out of college.

“I just loved pizza, and this area here is right on four corners, and that’s key,” he says. “You can’t get in the place.

“Being in the laundry business, I serviced a lot of restaurants –– you know, aprons and towels. I told people I was going into the pizza business and those people kind of laughed at me. The first couple of nights I opened up I was borrowing dough from them. Now we’re one of the busiest restaurants in Connecticut. Knock on wood –– it’s just been 24 years of craziness.”

At the original Vazzy’s, the old-school eatery is filled wall-to-wall with photos of previous diners, including former mayors, governors and celebrities. “All the customers who come here are friends,” Vazzano says, proudly looking at the impressive display of faces. “And when I say ‘friends’ I mean we’re on a first-name basis with some of our customers.”

The company’s second store opened four years after the first, about 15 minutes away in Monroe, Connecticut. That was close enough that Vazzano and his management team could easily commute from one store to another. Two other stores opened after that.

Vazzano’s tale is a familiar one. “We grew up in Italian kitchens,” he says. “My grandmother, she’s from Italy. Both my sides, we made the traditional gravy, and polenta –– a lot of old-school things.”

That type of cooking carries through today, where Vazzano says “we do a lot of the peasant food still. We do escarole and beans. We do those because a lot of other restaurants won’t do them. People will come in for it, like our pasta e fagioli.”

But that doesn’t mean Vazzy’s menu is so Old World that it lacks variety and creativity. “We have an extensive blackboard every night of what’s fresh,” he says.

It’s at this point in the conversation that I look over and see two bibbed customers cracking whole lobsters on a Tuesday afternoon. “It’s usually seasonal, but we do twin lobsters,” Vazzano’s son, Alex, says. A former professional hockey player, Alex has only recently joined his father in the family business, and Vazzano’s brother, Chris, and various other family members pop in and out to lend a hand.

Among the specialties are the shrimp onkey (sautéed shrimp with capers, tomatoes, lemon white wine and toast points for $11.95) and Sicilian calamari. The menu is admittedly large, with steaks, a large pasta list, grinders and, of course, pizza (which makes up about 40 percent of sales). The staff cross-utilizes many of the ingredients across the board. Much is made in house, and “we use all local products. We buy local. We get deliveries every day. We don’t have a lot of room, so we use everything.” The original location easily goes through a thousand pounds of chicken every 14 days. Everything is made to order.

When formulating Vazzy’s menu, Vazzano and his team looked for “fresh ingredients, local ingredients (and) we were looking to incorporate some of our favorite things that we liked to eat at other places in New York or Boston –– big restaurant hubs –– and bring them back local. The meatball salad that we have on special a lot is a big seller, as is the Sicilian calamari. We incorporate other ideas and do them the way we like to do them.”

Aside from the restaurant, Vazzano offers several items for sale commercially, including his “Sunday gravy” and pizza dough. Meatballs? They can’t keep them in.

Vazzy’s is also famous for its Hot Oil Pizza with sausage ($16.95 for a large), but the Salt Water Pie is also a standout with lobster, shrimp, scallops, calamari, olive oil, basil and Parmesan cheese ($26.95 for a large).

The Banana Chantilly is their signature dessert and is made specifically for Vazzy’s (they sell 40 to 50 a week during the holidays). Cannoli filling is made in-house and they rotate four cheesecakes. “We don’t have a big selection (of desserts), but what we do have, (customers) come in for,” Vazzano says. His motto? If you’re going to offer it, do it right.

“If you look at the menu, everything on there is named after a family member or friend,” Vazzano says. “That’s the way we want our business.”

Dine-in accounts for 70 percent of sales, with carryout at 20 percent. Liquor, beer and wine comprise an even 33 percent each of the company’s bar sales.

“We do a lot of pizzas for schools,” Vazzano says. “We do almost 600 pizzas a week for private schools. It’s just something we’ve done since day one. Mondays, Tuesdays and Wednesdays we were slower during the week so we started doing wholesale pizzas for the schools and it worked out pretty well.”

They’ve added gluten-free pastas and pizzas to their menu, cooking the pizza in pans rather than directly on the stone of their deck oven. “We use a yucca dough that’s local and made in Danbury, Connecticut,” Vazzano says.

When asked what sets him apart from his competition, Vazzano easily says it’s his company’s commitment to the region.

“We’re big in the community,” he says. “I don’t want to toot my own horn, but I have nine places now.”  They’re not all named Vazzy’s to avoid saturating the market, and the family owns a 400-seat banquet hall, and one of the oldest bars in the country, The Windmill, where they sell pizza and more than 400 pounds of hot dogs a week.

“We do a lot of catering, and we have a pizza truck also that we go to people’s houses and events with,” Vazzano says.

After nearly a quarter of a century in the business, Vazzano hasn’t had to do a lot of marketing aside from some social media.

“I have my own foundation now,” he says. “We raise quite a bit of money. We have a food drive and a toy drive, and we give it right back to the community. We’ve raised over half a million dollars since we’ve been doing this. It’s all grassroots with the local police and fire departments. That’s who we’re hooked up with. We do all our fundraising with them, and the military.”

Even Vazzy’s merchandise –– with a t-shirt cheekily prodding Americans to “legalize marinara” — seem to fly out the door. “We sell them and all the money goes to charity,” Vazzano says.

Vazzano is looking to open a farm-to-table concept in the future, perhaps with a microbrewery, filling a niche he says is lacking in his area. Still, he stresses that owning a restaurant –– or in his case, multiple restaurants –– should be more than the 9-to-5 grind.

“It’s never been about the job,” Vazzano says. “”It’s fun. That’s what I’ve been trying to stress to my two sons.”