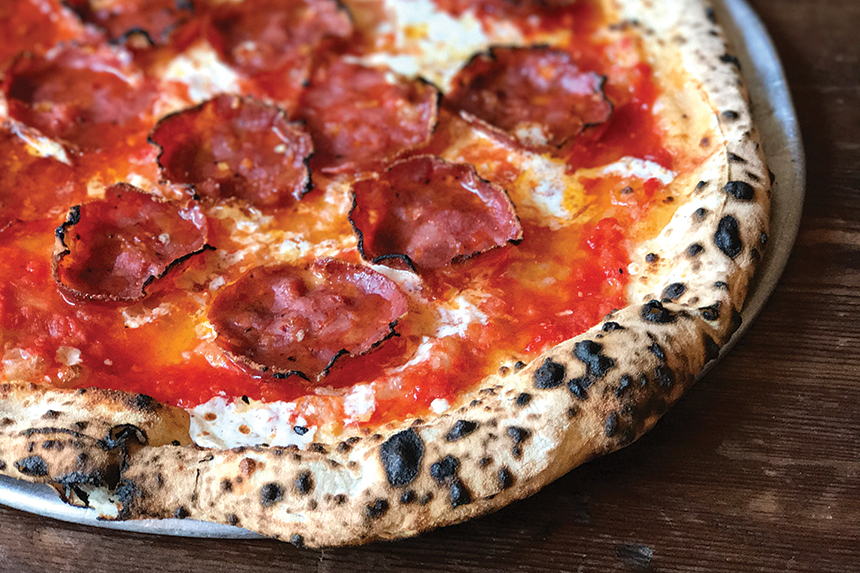 Paulie Gee’s a must-hit in Brooklyn

Paul Giannone hasn’t been in the pizza business his whole life like many of his competitors. He doesn’t bleed marinara, or sweat olive oil, and his hands weren’t covered in flour from an early age. What he does do is listen –– and listen well. He asked the right questions of the right people in the industry. He watched, learned and studied; and, in the end, his ability to assimilate made all the difference in the world when he opened Paulie Gee’s in Brooklyn’s Greenpoint district in 2010. In just seven years, his name has become synonymous with some of NYC’s top pizzaiolos — and it’s spreading nationally as his company has begun franchising.

“For the 30 years before that, I worked in the corporate world as an IT professional,” Giannone says. “It was just the career I chose. It wasn’t necessarily suited for me. For all of those years I toiled, not really achieving what I wanted to achieve in life. I took good care of my family. I gave them whatever I could … but I felt unsatisfied. Unfulfilled.

“I always loved to cook. I loved to entertain people, for 10 people, sometimes more. Sometimes we’d have parties for events … and I’d cook for 50 people. You know, it was a lot of work, but I always enjoyed it. And people would tell me I should open up my own restaurant. I really had no interest in that. It made my head spin just thinking about it.”

At the same time, Giannone calls himself a “pizza enthusiast” who actively sought out pizzerias in the New York area “and I observed that the pizza-making process was far simpler than opening a traditional full-service restaurant,” he says. “That emboldened me. That made me think ‘Maybe that is something I can do, and do well.’ Because whatever I did at that point in my life, it had to be a home run. I was in my mid-fifties.”

Giannone initially built a pizza oven at home. “I first had to prove to myself that I could make pizza that was good enough that I could serve to the public,” he says. After many, many tries, Giannone did the unthinkable: he managed to get some of the area’s top bloggers to come to his house to try his pizza. He worked on building his reputation first, and an invite to Giannone’s home became coveted by pizza enthusiasts and writers.

“Eventually, I found a couple of people willing to invest in me,” he says. “I went and took out a second mortgage on my house, so to speak. Whenever I would go to find (investors), they would ask me if I had any skin in the game. I needed to have some skin in the game.”

Eventually he settled on Brooklyn’s Greenpoint neighborhood. “One of the things I did along the way was I picked the brains of everybody who’s making the kind of pizza I wanted to make (and) running an establishment the way I wanted to run an establishment,” Giannone says. The immediate area had no pizza, just bars. “I saw what was going to happen to this intersection. It had this buzz to it, and I knew it was going to get better and I said, ‘This is it. I have to get in here before somebody else does.’” Paulie Gee’s Brooklyn location had been a former restaurant that had suffered a fire and closed. With street parking, a large layout and plenty of room to build a pizza oven, the restaurant opened in March 2010.

When asked how he classifies his pizza, Giannone has one word: “simplicity.” His pizza bakes in under a minute, but he doesn’t like to talk in pedestrian terms like “table turns” and “check averages.”

Instead, his focus is on the food. The menu consists largely of signature pizzas baked in a wood-fired oven with kiln-dried hardwoods –– no additions or substitutions, please –– and a small handful of salads, soups and desserts. Initially, Giannone said he expected “to be making pizza every night because the places I idolized –– Lucali, Pizzeria Bianco, Di Fara, Una Pizza Napoletana — they all were the pizza makers. I thought I had to be the only one. Friends and Family Night, I had a rude awakening that I just couldn’t keep up, first of all. I had this realization that those people had 35 seats. I had 70 seats. How was I going to keep up? As time went on, we weren’t that busy at first. People wanted to talk to me, and I’m standing there making pizza and talking to people and they were slowing me down.”

He brought on some solid pizza makers and “that’s when this stopped being a job for me and started being a wonderful life,” Giannone says.

There’s no takeout or delivery. “I just don’t like what happens when you put the pizza in a box,” Giannone says. “I was busy enough to not do it.”

The restaurant only recently added a full liquor license, and bartenders create signature drinks, including a martini made with pickle juice (hey, don’t knock it until you’ve tried it!). Giannone took out some tables to make room for a bar because he found people would put their names in for tables — with a wait time of up to 90 minutes — and then would drink the time away in nearby bars. “I wanted to capture part of that,” he says. Alcohol accounts for 25 to 30 percent of sales.

Despite multiple locations, “I’m here six nights a week,” Giannone says. “I am one with the restaurant. This is not a business for me. This is my life, and I enjoy it. What I used to do at home, I’m doing here. And now, I don’t have to figure out ways to get people to come in here. They line up.”

We saw this first-hand on a summer Tuesday, when every table was full shortly after the restaurant opened at 6 p.m. “I’m here, I do my best to talk to all the guests who come in, and I enjoy that. I have a curiosity about people,” Giannone says.

When he first opened, Giannone admits he knew very little about running a restaurant, but he got good help from the start, including a kitchen manager who established the processes still used today. Noteworthy is the fact that the two-dozen employees don’t wear branded clothing. Instead, Giannone wants them to look like the guests who frequent the restaurant. He admits hiring has been challenging because “I don’t hire dishwashers who want to be dishwashers. I hire dishwashers who want to be pizza makers. They’ll pay their dues for a little while, they’ll work harder than anybody for the measly little money I can pay them, but you get a good employee out of them.”

Giannone himself likes sporting gear from other pizzerias, including the Minneapolis-based Pizzeria Lola hat he wore during our visit (Lola was our 2014 Independent of the Year). “Subliminally, I’m telling (guests) that I’m secure enough in what I’m serving (that) I’m willing to tell them to go somewhere else to eat pizza,” he says. “First and foremost, I’m a pizza enthusiast. I pay tribute to other pizzerias.”

Giannone most enjoys working for himself, even if that requires solving his own challenges. Since the company’s inception, more stores have opened in Columbus, Ohio; Miami; Chicago and Baltimore. All are franchised, but Giannone has plans to open a slice shop around the corner from his Greenpoint location in Brooklyn. With no takeout at Paulie Gee’s and the neighborhood rapidly growing, he thinks a traditional 1960s-style New York slice shop using deck ovens won’t cannibalize his sit-down business while still capitalizing on his solid reputation.