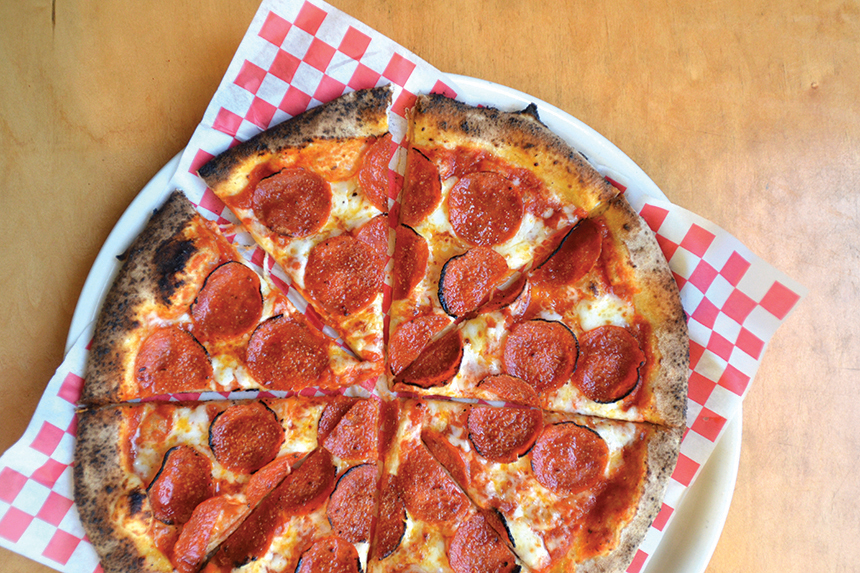 I first met Glenn Cybulski in a Mexican cantina at the Las Vegas airport. We’d both attended International Pizza Expo. I had a delayed flight; Cybulski and his then-partner were catching a drink before heading back to California, where the pair operated a take-and-bake concept that quite honestly wasn’t working. A chef with a big personality, Cybulski knew he had good food. He just couldn’t get the public to buy into take-and-bake.

Fast forward more than a decade, and I’m in California visiting Cybulski’s latest concept, Persona Wood Fired Pizzeria, which launched in March 2013. Finally, it seems, Cybulski has created a company that showcases his panache for flavor –– but in a modern fast-casual atmosphere that allows people the option to customize their own pizzas down a makeline. He isn’t the first to attempt this style, but he is one of the few who have managed to make it gourmet, fast and affordable. Simply put, he’s bringing upscale Neapolitan pizza to the masses.

First and foremost, Cybulski wants it known that quality is king at Persona. As much as possible is made on-site, from the dough, certainly, right down to the pesto, barbecue sauces, salad dressings, gluten-free offerings and desserts. “Everything is made in-house in all of our restaurants,” Cybulski adds. There’s very little ability to hide poor ingredients and technique in a concept like Persona, where customers start at one end of a makeline and watch their pizzas, stretched thin from a 9-ounce dough ball, being topped before baking in a gas- and wood-fired combination oven that sits in the open kitchen. Customers are able to watch their pizzas from topping to slicing.

“What I learned in Italy is you can’t teach someone in a fast-paced restaurant how to keep that oven stoked at 800 degrees with just wood,” Cybulski says. “It just doesn’t happen. There will be too much of a fluctuation. So the (gas) burner, especially with our expansion throughout the U.S., we just need the continuity on the bake. … We can’t say we’re Neapolitan if we’re burning gas.”

Unlike many of its competitors, Persona doesn’t utilize a dough press. All pizzas are hand-stretched, and “our pizza peels are our template for our 12-inch pizzas,” Cybulski says.

Employee training is critical when topping the pizzas. “The guest doesn’t know the calculations behind the makeline, but (employees do).” For instance, six small fresh mozzarella balls are counted out and torn to top a pizza. The customer doesn’t realize that amount equals a precise 3 ounces of cheese. Items like prosciutto are weighed out before adding to the makeline.

“There’s definitely a lot of training involved,” Cybulski says. “Food science behind pizza making –– I don’t think it’s as prevalent in the industry as it needs to be. Everybody measures their stuff out, but how palatable are the ingredients you are using? What are the other senses that need to be excited? All of those senses trigger endorphins in our brain that tell us that we’re satisfied. And we don’t know that less is actually more.”

“The biggest problem in the pizza industry with our operators is they don’t watch the nickels and dimes,” Cybulski says. “They just pile (toppings) on and they don’t realize ‘why am I losing so much money? I’m selling so many pizzas. I’ve got great revenue. But where are my costs?’”

The night crew preps the makeline and kitchen for the next day when it is slow, meaning the day crew doesn’t get started until close to lunch service. “When they come in, they know where they’re going to be working and they know what’s expected of them,” Cybulski says. “That helps in their attitude, and it helps efficiencies. … What we do is we cross-utilize our labor. Once (employees) are done in the kitchen they can come out to the front of the house. We don’t send them home. They know if they’re efficient, their efficiencies will be tied to their bonuses at the end of the year.”

With just about everything made from scratch, “does it take a little bit more labor? Of course it does,” Cybulski adds. “But what are the benefits from doing that? The benefits are (that) our spoilage is a lot less … the differentiation in marketing in that we can say we make all these things in house. You’re not going to get this anywhere else. You can’t. And when people come in and fall in love with our barbecue sauce (or) fall in love with our chipotle sauce, that’s what keeps us getting great customer retention.”

They even use one pizza cutter per pizza to avoid cross-contaminating flavors.

That idea extends to delivery, where pizzas arrive uncut but sporting a branded pizza cutter. “Delivery is 20 percent of our revenue, and nobody wants to deliver Neapolitan pizza,” Cybulski says, adding that they have about a three-mile delivery radius. “We’re not known as a delivery pizza, but we will deliver.”

Beer and wine are available but make up just a small percentage of sales.

Cybulski created Persona with plans for immediate franchising. Growth has been slow, as Cybulski and his partners wanted to ensure the infrastructure was strong enough to support national expansion. He says: “I told my partners ‘Listen. We’re either going to do this right or we’re not going to do it.’ You have to educate as you go, learn from your mistakes and you move forward.”

Currently six units are in operation with another 20 sold. Expanding while still paying homage to the craft is a fine line, but one Cybulski feels will keep Persona ahead of the game in an increasingly competitive market.

“All of our franchisees who have come in to look at our concept up to this point, our final sales bit to them has been to say ‘try everybody else’s pizza and then come back,’” he says. “When we’re looking at building a company, we have to look at the longevity of the brand. Who’s going to be relevant in five years when everybody knows about create-your-own (and) knows they can get a pizza in five to 10 minutes? We actually have a kitchen. … We’ll start to be able to diversify the menu to stay relevant. In five years, this market will be saturated. … Will the companies who all press their pizzas survive? We don’t know. We hope. Competition is good. But the bottom line is they have nowhere to go. They have no kitchen to be creative.”

Cybulski partnered with a nationally recognized franchising company, and “we knew that we didn’t have the capitalization like the Pizza Revs or the Blazes, so our thought process was that if we got extremely solid, if we followed the level of vetting to our franchisees and we got the right franchisees, that they would grow the brand quickly in their own concentric circles,” Cybulski says, “and that’s exactly what happened. We allowed Columbia (South Carolina) to open with five stores. We allowed Houston (Texas) to open and (then) buy five stores. Was it a bit of a calculated gamble? Absolutely. Very, very important are the demographics that we have, nailing our target market, locations –– when we put all of those together and we could check off those boxes and said ‘ok, this a great franchisee,’ we know we can succeed.”

After opening the Santa Barbara location, Cybulski says they had more than 100 leads from interested potential franchisees. At a franchise show, Cybulski and his team were approached by a group who already operated a small chain of national sandwich shops. They wanted to buy into Persona, but much to their chagrin, Cybulski didn’t immediately jump at their offer.

And those same investors tried the pizza, saw the concept in action and now own their own Persona with more stores on the way.

“They said ‘that was basically the best thing you could have done was to tell us no, Glenn,’” Cybulski says. “In hindsight, that proved to us that we’re not just going to take anybody who comes in with signed check. And that’s a hard thing not to do.”

In the end, Cybulski is rightfully proud of his concept and its potential to grow nationally. Still, “when no ones here, and I’m just here by myself and everything’s quiet, that’s just heaven. It’s everything,” he nods. “Very cool. Very cool.”